“Highly irregular is the time I found a human foot in a toaster oven. This is just odd.”

There’s a difference.  And if you’ve got an easier time recollecting gum from your childhood than the events surrounding your wife’s death, of course you look a bit suspicious.

“The Rooster Prince” delves deeper into Lester’s attempts to reconcile with what happened to him, but at the same time conceal his role from Detective Solverson. Meanwhile, Lorne Malvo takes up the priesthood and two newcomers show they mean business through some serious sign language.

The episode begins with two men arriving at Hess & Son Transports to meet Max Gold. Mr. Numbers, played by Adam Goldberg, and his mute accomplice, Mr. Wrench, played by Russell Harvard, finally get to meet Mr. Gold, played by Brian Markinson, and let him know that Fargo sent them to find out what happened to Sam Hess and whether it was connected to any other business. After Hess mentions that Lorne came to size up Sam, the two newcomers decide to help find the killer. 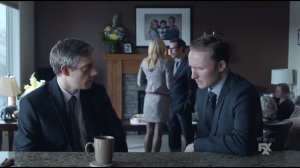 At a funeral home, Lester and others gather to remember Sam. Lester’s brother, Chaz, played by Joshua Close, and his wife, Kitty, played by Rachel Blanchard, suggest that Lester move in with them for a few days while his house is cleaned. 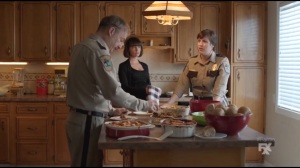 After spending some time at Vern’s gravestone, Deputy Solverson meets up with Chief Bill Oswalt, played by Bob Odenkirk, and she has a proposal: go back and question Lester Nygaard about what happened the night his wife and Vern died. Bill comes to Lester’s defense, noting that in school, Lester fainted at the sight of blood. He believes a drifter did it. However, Molly finds the sequence of events a bit too coincidental and believes they should still go ask Lester for more information.

Back in his own home, Lester examines some of Pearl’s belongings and replays the events of that horrible night. His dream is cut short when Solverson and Oswalt pay him a visit. Bill, who leads the conversation, asks about Lester’s possible connection to Lorne. He remembers very well that Sam used to bully Lester in high school, which is another clue for Molly, who doesn’t share Bill’s drifter theory. When Molly asks Lester to remember what happened that night and if he met a man when in the hospital, Lester dances around the question, saying that he can’t fully remember what happened. Bill, satisfied, decides to drop it and leave, but not before he and Lester remember a type of gum they liked when they were kids: Hubba-Bubba. Good that he remembered that long, forgotten detail. 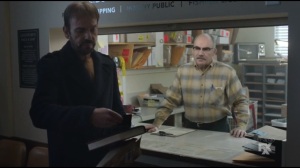 Lorne heads to a post office to pick up a package. Lorne tells the clerk that his name is Duluth, but since the name of the town he’s currently in is named Duluth, every single package will have Duluth on it. Tough, since Lorne won’t show any identification. The clerk does indeed find and hand Lorne a package addressed to Duluth. The package includes a book, entitled “American Phoenix,” and an ID inside. Turns out that Lorne was a minister all along. 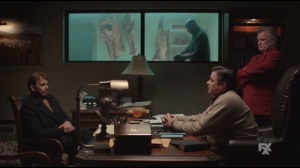 He heads to the Phoenix Farms Shopping Mart to meet the book’s author, Stavros Milos, played by Oliver Platt. Milos received a blackmail letter about ransom money and has brought in Lorne to take care of this problem.

Meanwhile, at the Duluth Police Department, Officer Gus Grimly and the rest of the squad hear about the murders, though Grimly has a clear memory of his run in with the man who gave him the chance to walk away and return to his daughter alive.

At home, he speaks with his daughter, Greta, played by Joey King, about bullying and confronting dangers head on, as he did a few nights ago. But Greta, if confronted, tells her father that she’d stop the bully no matter what.

Mr. Numbers and Mr. Wrench go to the stripper joint and talk with the woman who was with Sam the night he was killed. The owner tells the two about a man named Lenny, played by Paul Braunstein, one of the regulars who had apparently once said something about guys like Hess.

The two kidnap and bring Lenny to Max Gold, but he doesn’t think that’s the guy they want.

Lorne, under his identity as Minister Frank Peterson, talks with Stavros Milos’ wife, Helena, played by Allegra Fulton, and her bronzed trainer, Don Chumph, played by Glenn Howerton.  My goodness, Dennis got himself one hell of a tan.  Anyway, Lorne tries to get into Stavros’ fortune, which Helena places at $15 million or even higher. 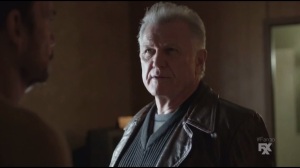 Later, one of Stavros’ right hand men approaches Lorne in his hotel room and tells him to get out of town. Lorne’s response? He enters the bathroom, drops trou and has a seat while reading a copy of “American Phoenix.” Guy couldn’t even be bothered to close the door.

Bill calls Molly into his office to see if they’re on the same page with Lester. He wants to focus on the break-in angle and suggests that they call other towns that have had similar occurrences.

Back in his own home again, Lester pulls off the back of the washing machine and takes out the hammer he used to bash Pearl to death.

He then has dinner with Chaz and his family before he realizes his hand, which has been irritating him throughout the episode due to an injury, is bothering him even more.

So he heads to a drug store to get something for a wound in order to stop it from infecting. And who should show up but Deputy Solverseon, who has more questions about his hospital encounter with the mysterious man. She still sees a connection between that and the murders and follows Lester all the way to his car. He tries to play it off and claims that Solverson is harassing him, but she just wants to get to understand these coincidences. But Lester, like Bill, believes the matter is closed and that she’s wasting her time. 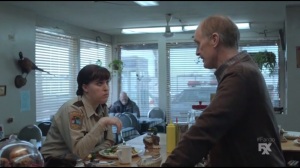 The next day at Lou’s Coffee Shop, Molly talks with her father, Lou, played by Keith Carradine, about the coincidences. Lou remembers when Molly was a young girl, she was put under anesthesia for her teeth. It may have had an effect, but the point he’s trying to make is that there’s evil in the world and she needs to understand that. But luckily, she carries a gun now.

In enters Bill, who received a phone call from Lester about Solverson questioning him. Bill makes it clear that while he and Molly may disagree on the case, he’s still the new chief. He had hoped people would line up behind him on this matter, but that’s not the case. As such, Molly is taken off of the murder case and will instead be the new lead on the frozen man case.

The episode comes to a close as Mr. Numbers and Mr. Wrench, on the middle of a sheet of ice, drill a hole into the ice before dropping in poor Lenny to take a long, cold nap.

“The Rooster Prince,” like the ending of last week’s episode with Gus Grimly running into Lorne, showed the dangers of getting too close. Sticking your nose into a sticky situation is a good way to tempt fate. And you can, like Detective Solverson, push deeper and keep poking at fate, or do what Officer Grimly did last week and back away when warned.

I’m interested in where this show will take Lester. The lapses in his memory have already clued off Molly, so he’s trapping himself without much effort. To not remember the events surrounding the death of your wife, but be able to recall a particular brand of gum from your childhood looks suspicious and it’s clear from the scene between Lester and the officers that he’s trying to paint himself as a victim.

In Lester’s mind, he’s not the one at fault, but the maniac who murdered his wife is. He’s trying to come off as confused and uncertain, so as not to create suspicion, but he’s not doing a good job at it. In fact, when Lester became increasingly agitated at Detective Solverson’s questions, it’s no wonder why Molly doesn’t just see these murders as random. 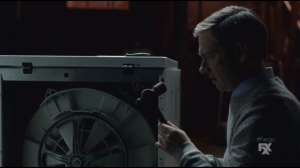 It’s clear that Lester does feel some level of remorse for killing his wife, as evidenced when he revisits his home and goes through his wife’s belongings. The hammer he keeps is like a trophy: a constant reminder of how he’s now a changed man through his reawakening.

Granted, that has to do with his interaction with Lorne, and though the two don’t interact at all this episode, Lorne is still present in Lester’s mind through what he did to Pearl. We don’t spend a lot of time getting into Lester’s head, and that’s fine since he’s not the focal point of the episode.

Molly, however, may be getting in a bit over her head. She’s by no means a bad character. Much like Frances McDormand in the original film, she’s the good cop. As is Bill, but he’s more concerned with moving on than getting to the bottom of the case. 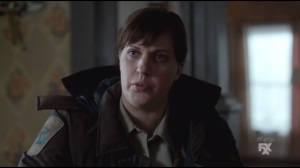 Deputy Solverson has good intentions and sees the obvious connections between Lester and Lorne. She doesn’t have a vendetta against Lester- she’s just doing her job the best way she knows how. But it’s because she’s doing her job that got her taken off the case because she’s asking too many questions too soon. At this point, it’s easy for Lester to paint himself as the victim.

As Molly reminds him, however, he wasn’t the only one who lost someone close that night. It’s no wonder Bill was so quick to take her off the case, but at the same time, this shows her commitment as an officer to investigate the truth and not just accept things as they are. Even though she’s off the case, I’m certain she’s not done just yet.

As for Lorne, the man has no fear whatsoever. He literally doesn’t give a crap about threats or intimidation. Again, Billy Bob Thornton plays the role well and it was nice to see him have some more light-hearted moments, such as with the postal clerk. Again, it felt reminiscent of the coin toss scene from No Country for Old Men.

Hopefully we get to see him do more than just be intimidating, though, because that can get very old very fast, particularly if he doesn’t meet anyone who can match him.

“The Rooster Prince” was another strong entry for the miniseries. I’m enjoying where the show is taking Deputy Solverson so far and hope they find a way to continue her involvement with Lester’s case.

I’m interested in the exploits of the side characters as well, particularly the newcomers, Mr. Numbers and Mr. Wrench. Gus Grimly, so far, seems like an outsider, but I appreciate that we’re given snippets and small moments with them. That way, the episode doesn’t feel overstuffed with constant appearances. Looking forward to the next episode.