Never let it be said that Veep leaves the little guy or gal behind.  Not all of the time.  We see the world come hard against Selina as almost everything that could go wrong or be potential setbacks for her do indeed happen.  Let’s jump right into it.

The episode begins in Anacostia, before we then cut to a section of D.C. that looks absolutely nothing like Anacostia, but such is most television shows that try to depict the District of Columbia accurately.  Getting way off topic here.  I’m a local.

A woman named Alicia Bryce, played by Tracie Thomas, and her friend, Dee, played by Edwina Findley, place up signs about a walk to the White House.  The walk in particular promotes universal child care, not exactly high up on the list of priorities for politicians when they actually enter office.  Nonetheless, it attracts Jonah’s attention, as he wants to tell Alicia’s story.

Turns out that Amy does, too, so Alicia goes with the more legitimate looking individual and talks to Selina on the phone. 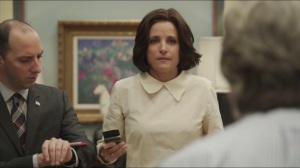 Selina promises that Alicia will play a key role with the campaign.  How big a role that is, we’re not told yet.  Kent tells Selina that child care is of no value in the world of politics.  As a result, bringing Alicia in would do no good, even with the two weeks rehearsal needed to prepare for Selina’s speech.

If that wasn’t enough, Dan brings Selina more bad news: Saturday Night Live has done a sketch making fun of her, an elected official, which we’ve never actually seen before on SNL, ever.  Dan suggests that Selina take it in stride and learn to laugh at herself, but Selina says nuts to that and demands NBC fix this.  It’s already starting a chain reaction that could turn off some potential voter groups.

Mike hands out advance copies of the speech, which turn out to just be press releases, just as Alicia arrives.  The choir that was supposed to be in the crowd behind Selina has fallen ill.  Selina comes in and meets with Alicia to give her just enough time to tell her that 38 percent of children don’t have health care.  Only 38 percent.  But then Senator Doyle shows up for his meeting with Selina.

Doyle recommends that Selina dump child care because it’s a bottomless money pit.  To play it safe, he says, she should play up the AARP.  As much as people may not want to believe it, older people actually vote.  Seniors are the easy vote.  Ben suggests Selina pick another principle.  Somehow Leon gets wind of a rumor that Selina will drop child care.  If she doesn’t, Doyle believes that politicians en route to Selina’s speech will suddenly get stuck in traffic for a long time.

Oh, and Dan learns from SNL that they plan to do another sketch.  Lovely. 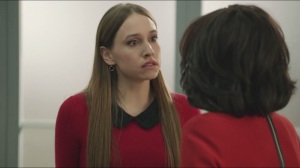 And Catherine shows up in a dress similar to Selina, who wants her out of it.

Selina doesn’t want to buckle to pressure, but she recognizes that the Party will dictate to her.  They will not, however, claim ownership of her.  So she decides to lose child care and replaces that priority with seniors.

And the bearer of the bad news would be Amy, if she didn’t pass on the honor to Mike, who has to break the bad news to Alicia and Dee, who has just arrived.  The two are understandably angry, and they don’t really do Mike any favors when he tries to calm them down. 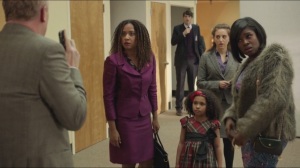 So what does Mike do?  In his anger, he calls Alicia a stupid cow.  Yeah.  And Jonah heard it, too. 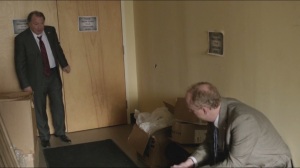 Ben later finds Mike sulking in the room of regret, but he has a solution: he must go lower than Jonah.  He must apologize.

But this is Jonah, and as he doesn’t have a better nature, it wouldn’t be right if he didn’t milk it a little bit by having Mike sing a Civil War song in an accent.

While in her depressed funk, Selina gets a pep talk from Catherine, who reminds her that she’s had a shitty time as the vice president’s daughter and missing out on having a normal life.  However, it’s been worth it if she becomes the daughter of the next President of the United States, Paul Ryan!

So Selina comes out and decides to wing any speech.  The speech has to actually be written, though, so there’s that.

Oh, and Lorne Michaels tells Selina that SNL will stop doing sketches about her.  After doing one more about her.  Hey, at least he told her.

Jonah still intends to write about Mike’s meltdown, but then he goes and blows it by asking Alicia to confirm and comment on the remarks.  Alicia denies it, but once Jonah is out of sight, she still tells Mike off for, you know, calling her a cow.

Selina announces her presidential candidacy off-screen, though we hear snippets of the speech and though she dropped child care, she did include a mention of Alicia’s daughter in the speech.  Selina tells Alicia that someone from the vice presidential team will travel with Alicia to one of her events.  Not her, though.  She’s the Vice President and stuff.  Far too busy for a commoner.  The burden falls on Catherine, who, after schedule confirmation, also cannot attend.

No, that doesn’t work, either.  All right, how about this: Selina and company try to make time for the little guy, but it doesn’t always work out, which is pretty much the case for this week.  In one of the more character driven episodes for Selina, we see her grapple with sticking to her principles in the face of fighting a battle that won’t, in the eyes of other politicians, reel in new voters that will help her clinch the presidency.

The little guy, the commoner, they don’t have overflowing pockets of money, don’t own their own super PAC and have little to no name recognition.  Alicia is one of those people in the eyes of Kent, Ben, numerous other politicians and maybe even Selina, too.  To them, Alicia is just another faceless name in a crowd that symbolizes America like a United Colors of Benetton poster.

Speaking of, I did like the storyline of trying to arrange who will stand where behind Selina when she announces her candidacy.  Anytime you watch a politician give a speech, watch the background behind them.  Chances are they’ll try to have one of every flavor, creed, color and gender.  It makes everything look diverse.  In addition, politicians will name a particular person or two to highlight their personal struggle or achievement.  Those little moments humanize the politician and it helps make them personable and relatable to voters.  A good example of that would be then President-elect Obama telling his daughters that they would be getting a puppy since they were headed to the White House.  People remember things like that because they make the politicians appear normal, like us, as opposed to being bought and sold by special interest groups.

Selina wants to maintain that human side of her, but this week, nothing goes her way and it brings her to a low point before she’s even declared her candidacy.  She wants to aid Alicia’s child care efforts, but it’s a losing battle.  She’s under pressure from all sides to do what they believe is the right decision, which justifies Selina’s anger when she realized her party wanted to pull her strings instead of letting her do for herself.

This doesn’t mean Selina is without fault, as she’s got a snarky retort for most situations, but being flanked from all sides shows just a taste of the pressure she’ll receive during her presidential run to bend to many sides just to make everyone except her happy.  Dreyfus shows a lot of frustration in her performance, much of it done without saying a word, and it shows, again, her range as an actress on a show that’s mostly known for its comedy.

And we did get some humor here, but I wanted to address two things: so Jonah wants to blackmail Mike.  He knows what he heard.  Why didn’t he just run with it instead of going to Alicia for comment?  Sure, Alicia may have screwed him over either way, but he was a witness to it, so I’m not sure why he went out of his way to get Alicia to comment. 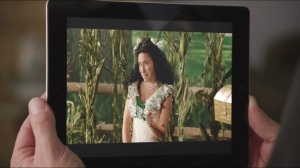 And I did enjoy the Saturday Night Live subplot that ended with Selina appearing on the show to thunderous applause.

An obvious reference to Sarah Palin’s appearance on the program and made even funnier by the fact that Julia Louis-Dreyfus herself is a Saturday Night Live alumna.  I am curious as to why the show didn’t use someone who’s currently on SNL to parody Selina, but that’s coming from the perspective of someone who regularly watches the show and would actually notice that.

The reality of Selina’s situation is that older people vote and child care isn’t going to win her the presidency.  She doesn’t like it, but that’s the nature of politics.  Money talks and politicians gain a boost in name recognition if they go hand in hand with special interest groups.  That, in turn, makes them career politicians who lose touch with their constituents and more in touch with the political cesspool that is Washington and the little club called Congress.  Child care sounds good on paper, but come election time in November, it may not make a difference.

This episode showed Selina at a crossroads.  She wants to back the little guy, but she can’t realistically win the presidency without the big guys.  After years of having to deal with POTUS’ problems that end up lumped onto her, she’s making a run for the presidency.  And there’s much at stake, as we see when Catherine explains that her crappy life will be well worth it if Selina becomes president.  “Alicia” tackled the complexities of trying to integrate to everyday voters while not ignoring big donors.  It pushed Selina to a low state, but then launched her back to reality when she proudly announced her candidacy for the president of the United States.

Let’s sit back and enjoy the ride.