Time for the world of The Walking Dead to start expanding. 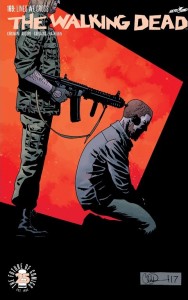 There’s no doubt that The Walking Dead centers around a group of survivors in the post-apocalyptic world.  It’s just that, though, a group of survivors.  And while it’s been great to watch Rick and company survive one obstacle after another, it has, for the most part, been their story.  There’s nothing wrong with that, but sometimes I wonder what’s happening elsewhere in the world.

Now, The Walking Dead: The Alien gave us a glimpse of the outbreak in Spain and Here’s Negan gives us a look at Negan went through prior when readers first met him in issue #100, but Robert Kirkman has kept us following Rick’s group.  I say this because there’s  a treasure trove of opportunities for storytelling by exploring other territories affected by the outbreak.  And with this issue, we may get just that. 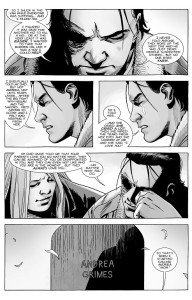 But we’ll get to that in a bit.  Carl opening up to Lydia and telling her about killing Ben was a great moment.  For one, timeline-wise, we find out just when Andrea learned about what Carl had done.  We never saw it happen and just assumed it was off-panel, and there’s nothing wrong with that.  But given much Andrea and Dale cared for Ben and Billy, I imagine Andrea learning the truth would crush her.

And it did, but this also solidified in Carl’s mind that Andrea could be his new mother and fill the void left by Lori.  As Rick told Carl, a parent can be upset, angry, or even downright disappointed in their child, but they will always love their child no matter what.  This is where Andrea stops being another survivor to Carl and becomes Mom.

It’s not an issue that we didn’t see Andrea’s reaction.  And with Carl in mourning, this feels like a good opportunity for him to bear his soul to Lydia in what was as a very heartfelt admission. 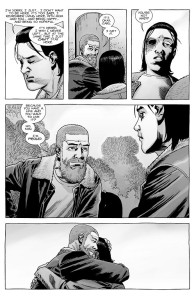 Oh, but we’re not done with Carl yet.  Between everything he’s been through in his life, Carl is ready to be his own man.  I see Carl like that young adult who just graduated college, was fine staying at home for a bit next to their parent while they gained some real world experience, and eventually came to their own conclusion on when it was time to start the next chapter of their life.  On their own.

After all, one of the reasons he went to the Hilltop was to become an apprentice.  He’s spent enough time there and fought alongside the residents against the Whisperers.  Not that there’s nothing left for Carl in the Alexandria Safe Zone, but he knows that he needs to have his own life.  And of course Rick would be supportive of this.  Carl isn’t a boy anymore and Rick understands that his son is ready to move on without him.

It’s a nice, simple moment between the two and this is one of the things that I enjoy about this series.  Mayhem and killing roamers can be fine, but it’s the quieter moments that I like when it’s just characters interacting.  And given the loss Rick and Carl have faced, it is a bit bittersweet that they’re parting ways, but Carl knows that it’s time.  Plus, not like the two will never see each other again. 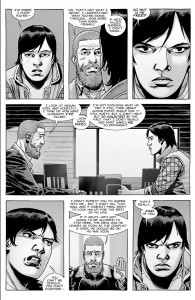 We do, at last, see Maggie confronting Rick on Negan’s freedom.  This had to happen at some point and as we’ll further see later, no way in hell will she just accept Negan being free, no matter what he’s done to help.  Glenn’s death will never be forgotten, and to see Negan walk around as a free man irks Maggie.  But compared to the last time she and Rick clashed, they aren’t throwing punches, so that’s better.

Interesting for Rick to say that, given all the people he’s killed, he at times doesn’t feel different from Negan.  Sure, Rick isn’t forcing people into this way of life.  The Saviors, for example, can opt out if they’d like.  But Rick has still murdered a number of people, so in the minds of some, he could be seen as a monster.  There’s a part of him that feels it’s unjust to keep Negan imprisoned. 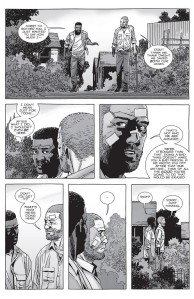 I think back to what Rick said to Vincent in issue #151 when he told him that doing a bad thing doesn’t make you a bad person.  And killing a perpetrator like Negan might erase the good he could do later.  No, I doubt Rick, Maggie, or anyone could forgive Negan for beating Glenn to death, but there’s still a chance for him to reform.

Negan has been of aid to Rick and the survivors since Brandon freed him, not the least of which includes literally cutting off the head of the Whisperers.  Plus, the backstory we’ve received in Here’s Negan has shown another side to him that does make him feel a bit more sympathetic.  I do believe Negan still may have an edge to him, but he’s proven his worth to Rick and shown how he can be a vital asset.  But not Maggie.  More on that later. 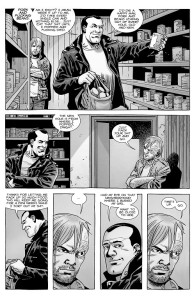 And speaking of Here’s Negan, by the way, that story arc enhances what Negan is going through now that we’ve learned about his history with his wife and where he buried her. Even if you’ve never read Here’s Negan, it’s nice to get a sense of where he’s going next. Maybe find a nice spot to settle and establish himself. 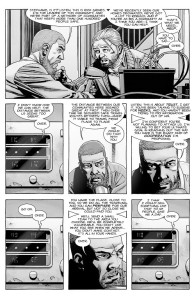 Onto the expansion, though.  For awhile, we’ve watched Eugene and Stephanie interact over the radio and it was just a matter of time before others found out.  With Siddiq telling Rick, we’re seeing the two sides attempt to come to an understanding and negotiate for the benefit of both their communities.  It’s great that Rick, while wary, is still open to having a team head to Stephanie’s location.

He could’ve demanded it- this is Rick Grimes we’re talking about- but he’s not in a position to barter.  Plus, after the roamer herd attack, the communities need all the help they can get.  It’s a risk he’s willing to take.  But wow, going to Ohio isn’t going to be an easy trip. Just looking at a map, the distance from Alexandria to Ohio isn’t as great as I expected, but still a lengthy journey nonetheless.

However, this is necessary when expanding the world and I think it’s great that we’re on the verge of seeing life and communities away from the characters we’ve followed.  This is uncharted territory and I’m anxious to find out how others have survived in the post-outbreak world.  Not to mention it’ll be great just to follow the Alexandria survivors on their way to Ohio, since they could run into some obstacles on the way. 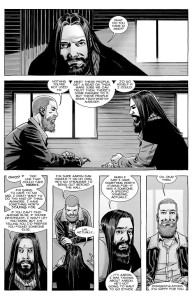 Plus, Jesus won’t be there.  For a guy who is used to traveling long distances for surveillance purposes, his relationship with Aaron now gives him a reason to stick around and stay close to home. 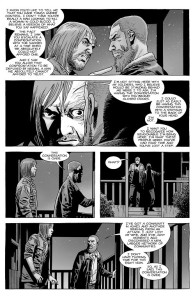 Then you’ve got Dwight confronting Rick.  Dwight has every right to be upset over Sherry’s death, despite how their relationship ended, but he has no reason to suspect that Rick would lie about the details.  Sherry lead the Saviors to Alexandria for a takeover. Wouldn’t it seem practical that, when she has Rick alone, she might try to kill him? If Rick killed Sherry out of malice or just to get rid of her, he’d say that.  He’s not a bullshitter.

But check out the brass pair on Dwight.  As Rick rightly points out, Dwight didn’t even want to lead the Saviors, so how can he even think of wanting to lead Alexandria?  Sure, Rick might not be everyone’s ideal leader and he can be brash, but he’s shown that he has what it takes to be in charge and make tough decisions.

Not so for Dwight, who seems more concerned with just taking leadership away from Rick than actually leading Alexandria.  Sure, folks might not like that Rick allowed Negan to diffuse the situation with the Saviors, but it produced results.  Despite Dwight’s bold assertion that he could’ve held a gun to Rick’s head and saying that he’s being reasonable, this just puts him on thin ice.

Plus, I like how Rick just shut down the conversation, no questions asked.  He’s got enough on his plate with rebuilding, sending out a team, and still handling Andrea’s death. Losing Dwight wouldn’t mean much to him, especially if Dwight is going to push a man who also has rage boiling beneath the surface.  All Rick would need is a little push, and if Dwight keeps in this direction, he could wind up another of Rick’s victims. 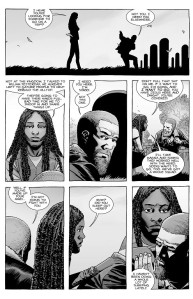 Since Jesus isn’t the one heading on the road, Michonne has decided to step up instead, against Rick’s wishes.  But no way in hell can he keep her there.  Plus, she’s taking Magna and Yumiko with her, which is fine because I want Magna’s group to get more to do.  I just hope nothing happens to either of them.  Also, Michonne mentions that the Kingdom has its hands full, so keep an eye on the Kingdom going forward. 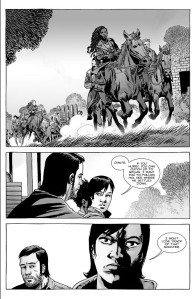 Now, bringing it back to Maggie.  Even though Negan’s proven his worth, she’s not letting him out of her sight.  She tells Dante to follow Negan and see where he settles down. Could be she’s just keeping tabs on and plans to confront him later.  Maybe Negan will wind up in a situation where he ends up saving Dante or another survivor.  Either way, Maggie’s not done with Negan yet and I’m very curious to see where this goes.

“Lines We Cross” was a great read with some strong emotional moments.  People are still healing, but the story marches forward with some Alexandria residents headed to Ohio as The Walking Dead universe begins to expand.