Last season ended on somewhat of a high note for Selina Meyer and company.  POTUS decided to step down, meaning that Meyer herself would become the next President of the United States.  It’s a new day in Washington.

She gets to call the shots and no more fuck-ups for her and her crew.  Of course, by the time we closed out the season, there were just as many goofs and errors for Team Selina, not to mention losing the New Hampshire primary.  So hopefully Team Selina has had a chance to regain its stride, right?  Wait, this is Veep?  What am I even talking about?  Let’s dive right into “Joint Session.”

The season begins with President Selina Meyer addressing a joint session of Congress.  It’s finally here- Selina’s big moment to show the nation and world what she’s capable of.  After shaking hands and greeting many people, President Meyer heads to the podium and begins to deliver the speech that will define her presidency.

But then, in Veep fashion, the teleprompter displaying her speech suddenly shows an emoticon instead.  Ha! 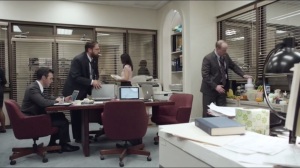 So what led to this moment?  We go back 24 hours earlier as Team Selina works on the President’s upcoming speech.  The problem is that the speech itself is too vague, which Selina apparently wanted.  Luckily, in addition to her team, she has the assistance of a new communications director, who has worked for as many as one president prior to Selina, and even that didn’t work out too well. 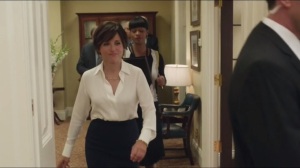 Selina, meanwhile, is leading a very busy life as the Commander in Chief.  She still receives daily updates from Sue and will need to prepare a statement to address two recent fatalities.  She doesn’t even have time to talk to Jim, Dan, and Mike yet.  She wants to, though.

So Selina takes time to do just that- the others even stand when she enters- and tells them to take the cuts section of her speech and put it with spending.  Oh, and some random new girl lets everyone know that three hikers haven’t been found yet.  Who is this new employee?  Who actually knows?  Anyway, Selina plans to say a few words about former President Hughes and then give her vision for the country.

And Selina is so busy with constant meetings that Gary doesn’t even get to tag along at her side anymore.  So he’s left to his own devices while Selina goes into an intelligence meeting.  The bag is welcome, though, but not Gary.  Selina decides against inviting the Vice President to the meeting, as she wouldn’t want them to endure what she did.

Jonah, meanwhile, is now working for the new Vice President and has a fun moment with the VP’s new Chief of Staff, Teddy Sykes, played by Patton Oswalt.  I already like this casting.  Teddy is welcoming, but he’s thrown off a bit since Jonah didn’t let him know that he was coming.  Anyway, Jonah is brought on to spy on the President, since that’s what he’s apparently good at.

As Jonah heads for the elevator, Teddy has a few words for him.  This sort of game takes guts.  To work in this industry, you gotta have balls.  Teddy grabs Jonah’s goody bag just to make sure that Jonah has some.  He does.  Oh, and next time that Jonah wants to swing by the VP’s office, just give some advance notice.  That shouldn’t be too hard. 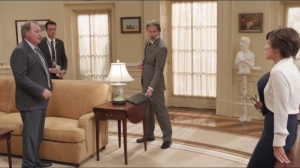 Back to prepping for Selina’s speech.  She isn’t a fan of Hughes’ plan, but she knows that she can’t advocate her Families First bill and have huge cuts at the same time.  Therein is a potential solution: propose cuts to the military.  That should lead to some negotiating if the military doesn’t like that.  Oh, and the Prime Minister of India sent Selina a golden duck.  Selina doesn’t want it.

Even though Selina still wants to find some middle ground, Ben informs her that such a task isn’t easy.  This sort of job never is easy.  What remains to be seen is what the Joint Chiefs of Staff will offer when they hear of Selina’s proposed cuts. 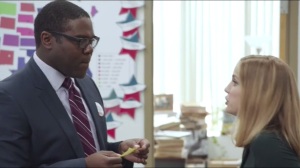 Amy, meanwhile, is stationed at Selina’s campaign office, along with Richard, who I’m glad is still around, if I’m honest.  When Amy learns of Selina’s proposal, she wants to know which will actually go through: cuts or spending.  Mike, however, isn’t sure of that yet.  There’s also a rumor that Joe Thornhill may drop out of the race.

To clarify this, Amy and Bill Ericsson meet up while Richard awkwardly tries to remember what it is that they want.  Anyway, the rumor about Thornhill isn’t completely true.  It’s not Thornhill who may be quitting- it’s Ericsson who could be planning to abandon his position as Thornhill’s campaign manager.  As much as he enjoyed Thornhill as a challenge, he now finds Thornhill boring.  Amy’s position, however, is very challenging.  Hell, if Bill wanted, he could probably have Amy’s job!

As Gary watches Selina from afar, Sue asks him about the location of a certain black binder.  He then gets a surprise from Jonah, who wants information on Teddy Sykes.  Luckily, Gary is already familiar with him.  He’s a great guy and very hands on.  Oh, I think Jonah knows that part already.

Selina meets up with the Joint Chiefs of Staff, who all have their own proposal for Selina: cutting $50 billion.  Holy shit snacks, that’s one hell of a cut!  As soon as the staff leaves, Selina and the team are instantly elated.  That is how you do business.  Sadly, by the time the Vice President arrives, though, the meeting is already over. 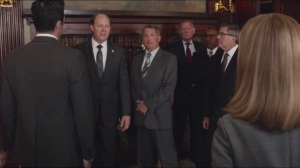 Well, we can’t let this happy moment last for long.  In enters the Military Industrial Complex, or Congressman Furlong, who is livid because the cuts will mean a lot of people in his district will be out of jobs.  He lets Selina know that many of the lawmakers will vote against this Families First bill if the spending isn’t there.  So what happens now?  Time to cut the cuts!

Oh, and just before speech time, Gary takes Selina’s glasses from her since the outline of them make it look as if she has a penis.  That’s always something you need to watch.

But as Selina delivers the speech, the team realizes that the speech displayed is actually the one with Hughes’ plans, which Selina doesn’t want.  As such, Selina asks for a moment of silence to remember President Hughes and his wife.  No, I take that back.  She asks for a long moment of silence so her team of idiots can get the damned speech back up.  It’s worth noting that both Hughes and his wife are still alive.

And even though Selina may have a hard copy of the speech, she can’t read it without her glasses.  Nice going, Gary.  You have officially blinded the President.

So when the speech does come back up, Selina begins to deliver it, until she ends up on “FUTURE WHATEVER” and starts to adlib the shit out of her speech.  She wants to tell the American people who she is and meet them at that train station!  The crowd loves it!  But then the team realizes that Selina mentioned the investment on submarines.  Whoops.  Also, she didn’t announce a dead guy’s plan since Hughes isn’t dead!

Later on, a now livid President Meyer chews out her incompetent team for including spending in the speech instead of cuts.  This was supposed to be the speech that defined her presidency, but now that’s ruined.  She was going to help kids in poverty, but now she’s funding obsolete, giant metal dildos.  Hooray!  Even as Selina sends her team away, they slowly, one-by-one, slip back in with various updates, such as an upcoming campaign meeting, Gary enters and instantly leaves with new glasses, the wrong guy’s truck in Yemen was droned, and the two hikers are dead.  Wait, what hikers?

Veep, never change.  “Joint Session” showed the continuing transition for Team Selina as they move from Vice Presidential duties to Presidential duties.  While it would have been nice to spend more time with everyone and see how they’re adjusting, this episode showed just how fast paced the political world is, even if these people have next to no idea how to competently do their jobs. 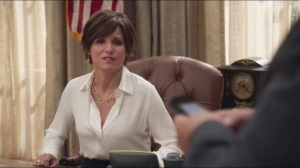 There’s no time to breathe in this episode.  Everything and everyone is constantly moving from one arrangement or meeting to the next because there’s relaxation or grace period.  We got all that in the Season Three finale when Selina and her team headed to Washington, but you have to keep in mind that it’s still time to get down to business.  When Selina was the Vice President, she could have those moments of downtime where she and the team could shoot the shit or go over their next move.  Here, every move is their next move, but because these people aren’t good at their jobs, most of their moves end up being the wrong moves.

And that wrong move could end up costing Selina the job.  We don’t get a sense of how much time has passed since “New Hampshire,” but keep in mind that Selina didn’t win the Presidency so much as just ascend into the position since Hughes resigned.  She still needs to actually win the Primary and be a competent President at the same time.  That’s hard to do when she’s getting stonewalled from all directions, whether from other politicians, her staff, or her own incompetency.

At the very least, we know that Selina has good intentions.  She still wants to push her Families First bill forward, but also has to please the military industrial complex that is at danger of losing many jobs if Selina decides to go with cuts instead of spending.  She wants to do the best job and knows that she and her staff need to step it up because this isn’t the Vice Presidency anymore.  Even still, some things never change.

Whether it’s the team flubbing the speech, Mike not staying in the media loop despite working in communications, or Gary’s meltdown after blinding Selina, we see that, despite Selina being the President, there are just as many, if not more problems than when she was the Vice President.  Gary has now had two major flubs between this and Selina’s duck sounding shoes from the Season Three finale.  I wouldn’t be surprised if Selina decided to give him as even more limited access.

And at least some of the team members do try.  Sue is just as much of a busybody as she always has been and, luckily, doesn’t really muck up compared to the rest of the team. 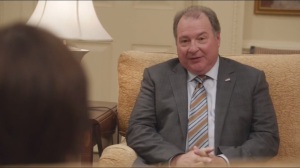 Ben is also a good fit as Chief of Staff, even if it’s a job he didn’t want.  He’s seen what Washington politics can do to people and it’s definitely had an impact on him.  At the same time, both he and Kent bring a certain level of experience and narcissism to the team. 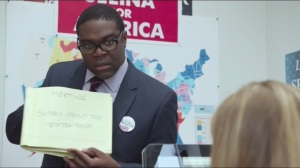 Speaking of the team, I do like the fact that Richard has remained on from last season.  He’s just as bumbling as he was last season and almost makes Team Selina look competent by comparison, but we know that’s not saying much.  At the very least, this provides some continuity between the seasons.  Same with Ericsson’s looming presence and the possibility that he would try and take Amy’s job since he figures himself as a better campaign manager.

And Julia Louis-Dreyfus was excellent during Selina’s speech.  There seemed to be such passion in her improvised speech, even if it was bullshit and she made a major flub in the process.  I actually had my head in my hands as the speech went on because watching Team Selina try to operate is like watching a slow fire build.

Seriously, though, what hikers?