The Walking Dead #139: “From the Edge of the World” is a good way for Robert Kirkman to slowly expand the universe he’s created as society slowly begins to rebuild itself and to show how the world has changed since the time-skip. 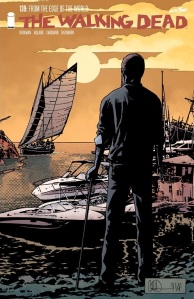 It’s not complete normalcy and we do get some roamer killing in this issue, but I felt this was a good way to catch us up to speed on what’s going on in the rest of The Walking Dead world since we’ve spent a considerable amount of time at The Hilltop.  Plus, the introduction of The Whisperers kept our focus on The Hilltop.

Actually, let’s start with The Hilltop, as this isn’t the main story this time.  Maggie seems to be doing just fine for the moment, but maybe it’s the adrenaline of her concern and anger over Carl’s disappearance.  Given how cordial the exchange was between Maggie and Alpha, she wouldn’t want Carl to ruin any chances of the groups coexisting.  Again, though, that’s a gray area since there don’t appear to be any established territory zones for The Whisperers. 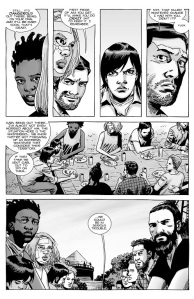 Oh, and for a series that’s as grim as The Walking Dead, I did like Dante’s brief line about Carl chasing a piece of ass like Lydia, not just because the humor is inappropriate, but because he immediately realizes that he’s killing his chances with Maggie, not that he ever had any.  Plus, there’s no way that anyone would know at this point that Carl and Lydia had sex.  I don’t think either one of them would go around boasting.  But the look Maggie gave Dante after his less than well-timed line was priceless.

As for Carl, though, the boy had better consider himself lucky that The Whisperers are being so cordial with him.  Even if he came of his own accord, Carl is still outnumbered, outgunned, and probably doesn’t know the terrain as well as The Whisperers do.  Again, I feel he’s motivated more to get Lydia back and less than getting to the bottom of who The Whisperers are.  At the very least, he seems to be in safe company, but this already isn’t going over well with Maggie, not to mention how it would go over with Rick since he placed Carl under her responsibility. 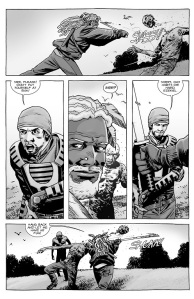 So onto the main plot of this issue, starting with the reintroduction of Ezekiel, Heath, and another character we’ll get to in a second- it’s great to see these characters doing well and just nice to see them at all.  We’ve had slight references to the folks outside of the Alexandria Safe Zone and The Hilltop, but this is, I believe, the first time we’ve seen them or spent a significant amount of time with them since the time skip.

It’s also nice to just see how much these characters have progressed.  For example, we learn from Rick that they’re stockpiling ammunition.  This is a very big deal.  For the longest time, ammunition on The Walking Dead was to be conserved.  You find ways to take care of roamers so you can preserve as many bullets as possible and save guns for worst case scenarios.

It’s something that both the comic and the show have kept true to, but if we’re at the point where the characters have more ammunition than necessary, they’re pretty much able to neutralize any roamer threats they come across for the moment.  It’s a useful advantage that is sure to be a benefit for anything or anyone the characters come across now that they’re able to manufacture bullets at this rate. 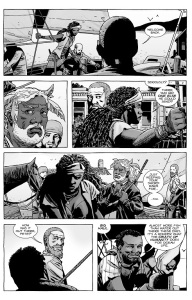 The same applies to the fact that there’s so much fish in the river since there are less humans to explore the water and the roamers, presumably, keep away from it.  It’s morbid to say, but the lack of humanity means much more fish to catch.

In addition, it’s nice that the three communities have found a way to cooperate and trade resources in a much more civil way than Negan tried with his system, if you can even call it that.  I say three communities because, in addition to seeing characters like Ezekiel and Heath again, we get a reference to Dwight, who is apparently able to provide the neighboring communities with lumber.  So it appears that Dwight has managed to reform The Saviors and turned them into a much more productive under his leadership than under Negan.  I’m glad Dwight turned into an ally, as it would have been easy to keep The Saviors as antagonists even if they weren’t being led by Negan.  Now they’re of use to the other communities.

Of course, the big moment of this issue was the return of Michonne.  It’s been a long time coming: twelve issues since the time-skip began and all we’ve had so far has been a brief reference to the character.  Now we see her, she looks great, and has had plenty of time to think while sailing the seas.  I’m looking forward to The Walking Dead spin-off series where Michonne decides to become a pirate.

But the free time on the sea has allowed her to do a lot of thinking and working.  Since her introduction, we’ve known Michonne as the loner, but she’s slowly integrated herself into the group.  However, that doesn’t mean she’s lost her sense of self.  We learn that she just up and disappeared, which concerned Rick, but it still bothered Michonne just as much.  Her relationship with Ezekiel became strained, so she just needed to get away.

As we dig into Michonne’s backstory, we learn that she’s been holding onto a lot of guilt- survivor’s guilt, to be specific.  She grew distant from her family and when the outbreak happened, she wasn’t there.  Sure, everyone has lost someone or something because of the roamer outbreak, but what separates Michonne from someone like Rick is that he saw their loved ones die before their eyes: it’s no speculation- Rick watched Lori and Judith get shot and killed during the Governor’s assault.  There’s no doubt that his loved ones are gone.

But not with Michonne.  Because she wasn’t there, she’s left with the nagging question of whether her family survived, though she’s positive that they’re dead.  There’s no way of knowing it, but this has eaten away at her for so long.  This is a very interesting development for Michonne and I like that Kirkman has given her this added dimension, as we know she’s had a lot on her mind since we last saw her.

This is something that has plagued the characters even before arriving at the Alexandria Safe Zone: is it right to have a do-over at life?  If so, does that mean you’re trampling all over your past life?  Michonne doesn’t want to allow herself to be happy because that would mean she’s disregarding her former life and allowing this new one to take place.  It’s as if she’s died, but would prefer to stay dead instead of having another chance to live.

Michonne could have the opportunity to start fresh, but what good is that life if she’s burying her past life?  I imagine this is something that many of the characters have grappled with as they try to maintain any sort of connection with their past lives.  Think about Rick talking with Lori on the phone.  Sure, he knew that she wasn’t there and it was all in his head, but he had some sort of connection to her.

“From the Edge of the World” was a very good issue that balanced multiple plots very well.  It continues The Hilltop storyline and put Carl in a potentially dangerous place as he travels with The Whisperers and put Maggie in a difficult position.  The world is slowly rebuilding itself and the three communities are working together to keep that revitalization going.  Michonne’s return is a welcome one and I’m glad she’s been able to do some thinking while out to sea.  Hopefully we learn what else she and the others have been up to.

But seriously, when are we gonna get that Michonne pirate spin-off series?