And so it’s come to this: the second half of Veep’s two-part season finale.  Selina Meyer has suddenly been thrust into the presidency while still having to campaign for the coveted spot in New Hampshire.  Maybe now that she’s becoming one of the most powerful people in the world, things will start to look up for Team Selina.

Maybe all the screw-ups are now a thing of the past.  Maybe they will all make a change. Wishful thinking, I know, but I can hope. 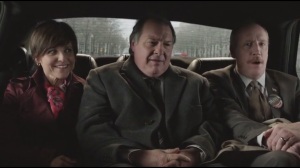 The episode begins with news spreading of Meyer preparing to accept the offer of President of the United States.  Everyone is too busy celebrating the sudden turn of events- Dan even got a voice mail from Beyonce, congratulating Selina on her win.  How Beyonce got Dan’s number is a mystery.  Amy, however, reminds Selina that she needs to return to New Hampshire to continue campaigning. 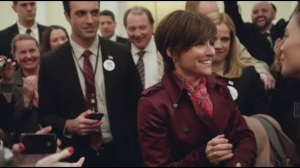 Sorry, Amy, the staff is having too much fun soaking in the moment to even care.  Selina is trailing Chung by a point and Pierce is about to pull out, which leaves Chung, Maddox and Thornhill.  There are more people around since the White House’s staff is now merging with hers.

But on a serious note, Selina needs a moment alone with Ben.  Neither of them expected Selina to win the presidency like this.  Ben also probably didn’t expect Selina’s sudden offer: she wants him as her acting Chief of Staff.  Ben, who has already seen the underbelly of Washington D.C. politics, doesn’t want it.  At all.

The job has already worn and hardened him and he wouldn’t want to go through that again.  But when Selina threatens to bring back Prohibition- she can apparently do that- Ben has no choice but to sign back on board.

With four hours to go until the oath of office, Mike dazzles the press at his very first official press briefing, while Amy returns to New Hampshire and finds…

…Kelly and Richard have returned.  Huh.  I was wondering what happened to those two.  The two are ready to work, but Amy just tells them to find their supervisor, whoever that may be.

Kent brings Dan into a closet with bad news: remember that Danny Chung torture story?  Well, the Chung campaign has traced the leak back to the source- Dan.  Kent gives Dan an ultimatum- six hours to resign.

After having a brief chat with Mike about the amazing press conference he ran on no sleep, Ben runs into Dan, who needs confirmation about the torture story.  But Ben suddenly has no idea what Dan is talking about.  And that is how you backpedal on controversial issues, people.

This leaves Dan with his last resort: Jonah.  He needs Jonah to flat out deny the story and rebuke his followers on the internet.  That the Internet would still consider Jonah credible is questionable, but that’s veering off topic.

On the big day, Selina is prepared to take the Oath of Office.  However, during the oath, Mike accidentally taps some nearby glass. Oh, Veep, never change.  Jonah, meanwhile, has a job in the White House again, but it’s not a job he’d want, so he wants a new deal.

Gary, meanwhile, has been saving a particular pair of shoes for Selina.  She puts them on and prepares to give her first presidential address.  Problem is the shoes squeak like ducks with each and every step.  And it doesn’t help that the squeaks can still be heard when she’s done giving her address.

When Selina returns to her team, she is livid.  Any and every screw-up that happens from now on will be a part of her legacy, so no more screw-ups!  Lady, do you have any idea what show you’re on?

Oh, speaking of screw-ups, the Iranians are pissed that Selina let go of Leslie Kerr from the State Department instead of Leanne Karr from Energy.  Easy mistake to make, right?  These kinds of goofs were easier to avoid as the Vice President, but now that Selina is the center of attention, everyone is gunning for her, hard.  Maddox withdraws from the race, so there’s that, but Chung is still trouncing her in the polls.

There’s still Jeff Kane, who controls the senior vote.  Dan goes to Jonah, who wants a new deal that includes an assistant, but not someone named Jonah.

One day left until the New Hampshire primary.  Maddox and Pierce have endorsed Chung, meaning Selina has no choice but to go to New Hampshire to campaign.  The team has a meeting set with Jeff Kane, who would like to see Selina embrace social security reform.

Everyone heads to a uniform factory in New Hampshire and the bad news train begins to roll on through: Ben tells Selina that she technically isn’t President because she didn’t say ‘preserve’ during the oath.  Thanks, Mike!  She’ll need to head back to D.C., but ther’s no time, so the plan is to have a local judge administer the oath.  However, Catherine’s not there to hold the Bible, so there’s one more inconvenience.

It gets worse.  Iran is still super pissed about Kerr’s firing, and this could a spike in gas prices. 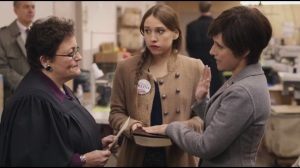 Catherine arrives, Uncle Jeff agrees to back Selina and the oath is redone.  So all is well, right?

Wrong.  Chung wins the New Hampshire primary.  The season comes to a close as Selina’s staff leaves the Vice President’s office and heads for the Oval Office.  I’d say it’s smooth sailing from here, but no.  Just no.

Ah, Veep, you never cease to make me laugh.  Combined with “Crate,” “New Hampshire” was a strong way to end the season.  In fact, I’d go as far to say that these were definitely my favorite two episodes of the entire season if only because everything built to this moment.  Granted, it wasn’t done in the way I had expected, but Veep has a habit of throwing a wrench into any plan you can think of.

So now that Selina is the President, the show’s very title is outdated.  Yeah, super minor and not even a nitpick, but can the show even be called Veep anymore?  Will it be called POTUS?  Can television shows even change their titles during their run?

There’s a real sense of optimism as Team Selina looks toward the horizon and heads to 1600 Pennsylvania Avenue, but for us viewers, there’s the possibility that Selina may actually turn out to be a damn good President.  This is something Selina’s wanted for as long as we’ve known her.

She’s been shafted left and right whenever the President makes a bad decision, her staff is completely incompetent and the day-to-day handlings of a Vice President aren’t all that exciting.  It’s realistic for her to think that once Selina became the Commander-in-Chief, things would get better.

But things don’t get any better for Selina once she becomes the President.  In fact, I think they actually get worse.  If she’d worn squeaky shoes and delivered an address as the Vice President, some pundits and sites may have gotten a laugh, but now she’s under a much larger microscope and every single move she makes will be scrutinized, criticized and analyzed to a greater extent.

But she tries to absolve herself of any blame, such as when she called the team a pack of idiots during “Crate” and telling Kent here that he should have questioned her authority when she removed Leslie Kerr instead of Leanne Karr.

Having to retake the Oath of Office and losing the New Hampshire primary don’t help, either.  There was genuine truth to when Selina told her team that any screw-ups would become a part of her legacy.  She can’t afford to have someone muck things up for her, but it’s going to and already has happened right out of the gate.

The joy she and Gary felt when they first learned that she would become President dissipates by season’s end when nothing changes.

We do still get to see the honeymoon period where Team Selina relishes the good news.  Mike was absolutely giddy during his performance as Press Secretary and got big laughs from the journalists.  But once things go awry for Selina, he becomes more antagonistic.  While Mike seems to be on board for the long haul, you could hear the disappointment in his voice when he learned that Selina would gain the Presidency.

I get the sense that he’s just tired of politics in general and would prefer a less stressful job.  That or live out his life in peace with Wendy and his kids.

And Gary just can’t catch a break.  Rachel Hordenthal told him to find a job he’s halfway decent at and throughout the season, he’s gotten progressively worse, even if Selina still considers him her right hand.  Then he gets left in New Hampshire, the first time Selina’s ever left him, and the shoes flub just created more embarrassment.  I loved Gary’s breakdown when he beat himself up over Selina’s squeaky shoes.

I’m curious where the show will take Dan and Amy.  It seems like Dan is back to his old self, as seen through his spats with Jonah, and now that Selina might not need a campaign manager, where will the show take him and Amy? 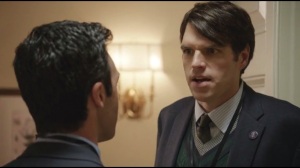 Speaking of, Jonah’s come a long way since the season premiere.  First, he got fired.  Then he tried his own blog and ran into conflicts with the Washington political elite.  Then Team Selina realized he was the linchpin to the senior vote.  And despite joining Team Maddox, the campaign went under.  And after all of this, he’s now back in the White House.  Of all the performances this season, Timothy Simons was definitely my favorite.

There is no joy for Selina Meyer and company, or any love in politics.  She becomes the President, but the daily problems continue.  In fact, I have to wonder if Selina will even still want the Presidency at this point.  This has been a very good season for Dreyfus, as she’s shown us Selina’s quiet moments of reflection and quick moments of anger.

Now she’s one of the most powerful people in the world.  Will it be what she expected?  If the season finale is any indication, it may just end up being more of the same for her and her ragtag team.  But that’s why we love Veep so much.  No one is promised happiness.