And so we’re back on the campaign trail as Veep wraps up its third season in a two-parter.  And what a two-parter it was, as we got a surprise turn of events. 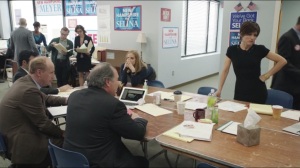 The episode begins with just four days left until the New Hampshire Primary.  Team Selina is watching Thornhill’s speeches and amazed at how someone so average could get a crowd fired up.  And yet Thornhill is killing in the polls because people like someone who comes off as normal.  Selina, eager to get away from politicos for a moment, believes that she can be folksy.

All right, I guess.  The team plans to plant her on street corners, malls, schools and on local call-in shows in order to get her in touch with the proletariat. 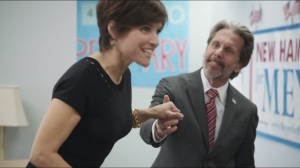 Kent has a genius idea: a heavy, reinforced titanium crate that Gary struggles to take out of the box.  However, he won’t be able to watch Selina give her literal stump speeches.  He’s headed back to D.C. to the President care to the First Lady.

From this, we get a brief montage of Selina delivering stump speech after stump speech- along with Dan briefly congratulating Amy on the campaign manager position.  Well, at least he’s not bitter. 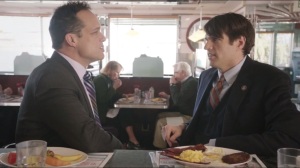 We revisit Bill Ericsson as he sits down to have breakfast with Jonah, who has bad news: the Maddox campaign is floundering and everyone is ready to abandon ship.  Jonah brags about having offers, but the truth is that he has none because, as Ericsson points out, he has no skills.  Jonah’s only useful because his uncle has the power to sway the senior vote.  In the end, Ericsson offers Jonah nothing. 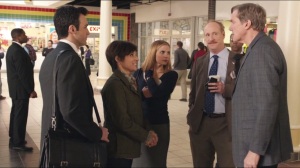 Selina meets with voters at a mall before her meeting with Quincy Carter, played by Nick Wyman: a writer at a local newspaper who can swing the vote, which is why he’s known as The Endorser.  He comments on the $1200 price tag for the crate.  Did that come out of Kent’s wallet?  Amy tells Dan to go grab Mike. 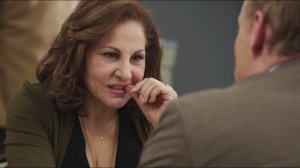 Mike, getting literally a few moments away from the campaign, speaks with Wendy about their future.  Though Mike at first can’t fathom the idea of leaving Selina, the prospect of him and his family having their home away from the world of partisan politics is tempting.

But Dan arrives and takes him away from his momentary happiness to bring him to Selina.  By the time they do, however, the reporter has already agreed to do a more substantial interview at another time. 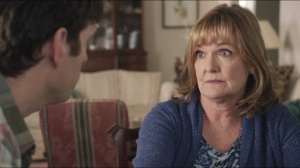 Three days until the primary, Jonah makes phone calls while neglecting to help his mother, played by Nancy Lenehan, sort out her pills.  Dick.  Jonah admits that he has no D.C. friends- they just call him names behind his back.  Literally behind his back so he can hear them.  All the times they called him names to his face must not count.  But what he could use now is a phone call to Uncle Jeff. 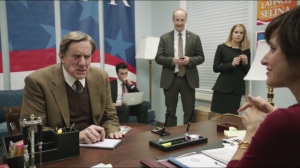 During the one-on-one interview, Carter asks Selina three quirky questions he asks all people he interviews: who, dead or alive, does she most despite?  She tries not to hate anyone, but turns out most people would just go with Hitler.  Second, if she could alter one personality trait, what would it be?

Selina responds that she can be a bit impatient- Mike fully agrees- and turns out that Neil Diamond had the same response.  Finally, why does God allow suffering?  Mike tries to help out by asking Siri, but Selina’s response about childhood cancers will have to suffice.

Carter leaves as Ben and Sue enter.  Sue, as has been her job this episode, delivers more news of campaign donations.  The team talks of the various names they give to particular donors who they feel don’t donate enough money, such as GUMMI: Give Us More Money, Idiots.  Dan just calls them dicks.  It doesn’t stand for anything, though. 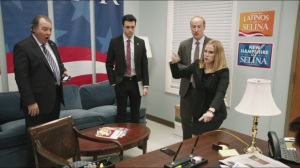 And it’s at this point that Amy draws their attention to Carter’s phone, which is on the table and still recording.  They scramble to cut it off or, at least, delete the recording, but end up getting locked out after too many password tries.  Gary tries to stall for time, but Carter returns and reclaims his phone. 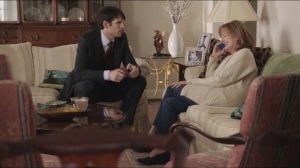 Jonah’s mom makes a call to Uncle Jeff to apologize for their spat, though she’s mostly there to help Jonah get a job with the Chung campaign.  All seems to be going well until mom and Joe fall back into their arguments, which leads to Uncle Jeff hanging up. 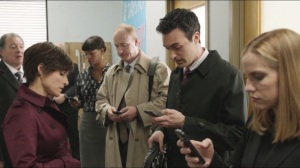 At Selina’s New Hampshire campaign office, the team learns that Quincy ran a piece on what Team Selina really makes of its donors, some of whom have withdrawn their donations.  After a long silence, Selina acknowledges that there’s no way out of this for a sitting Vice President who is on the verge of losing New Hampshire.  But no, she’s not to blame.  Her team of ragtag morons is! 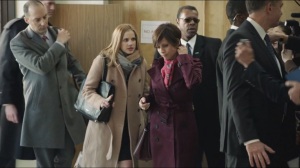 So during the next stop on the campaign trail, Selina and company are swarmed with questions, left and right.  She eventually gets to a room with some quiet and meets a couple from Syria.  Their conversation is cut short by the return of Kent who, as Amy notes, is acting weird. 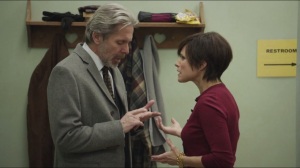 Kent reveals that the First Lady is not in a good place.  The President is going to resign in order to spend more time with her.

In other words, Selina Meyer is about to become the President of the United States. 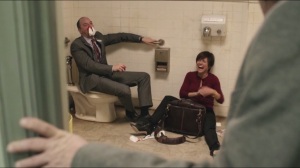 Selina, clearly overcome with emotion, enters the nearest restroom.  Gary soon joins her and when he learns of the good news, he gets a nosebleed.  The two are overcome with elation and start laughing as if they’re on some kind of drug.  Whatever it is, I want some.

Word passes down the Veep grapevine.  Though the plan is to return to D.C. as soon as possible for the swearing-in ceremony, Amy points out that Selina is technically still running for President, so someone has to remain in New Hampshire and be the face of the campaign.  That someone is none other than Gary.

Jonah gets the news of Selina’s ascent.  It’s as if someone just flew two planes into his career.

With the odds heavily against Selina, “Crate” was mostly about setup.  I won’t address much of what I liked and disliked about it because I feel it would go along much better in the second half of these two episodes.  However, I will say that this had all the trimmings of any presidential campaign: stump speeches, going to local newspapers and media, and trying to appeal to the everyday voter.

Team Selina, as usual, finds ways to screw things up.  It’s just in their nature that things will go wrong. 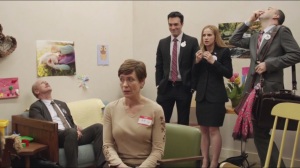 And Selina’s rise had some negative implications for some, such as the aforementioned Jonah, but even Mike, who looked to be on his way out to spend more time with his family, is now drawn back into the fray when his boss gains the Presidency. 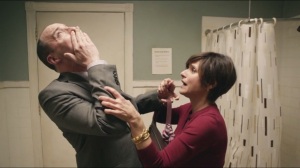 The highlight of this episode had to be Gary and Selina’s overjoyed reactions in the bathroom.  And it all felt natural, as if they’d just been told to react to receiving the greatest news ever, and it was great.  Gary ending up with a nosebleed, coupled with there being no toilet paper and his bag having tons of tampons made the scene funnier.

Again, there’s much to say about this episode, but we’ll save that for Part Two.