Even in another country, Vice President Selina Meyer has troubles all around her.  Learning that your campaign manager pimped you out is probably the biggest way to ruin your trip to London, even more so when you didn’t make any money out of it.

“Special Relationship” takes Team Selina to London, where they’re to meet with the Deputy Prime Minister.  Dan continues his work as campaign manager, but when he’s speaking quickly and downing Red Bulls to fuel himself, you know he’s headed for a crash.

The episode begins in London, where Super Campaign Manager Dan relays information to the team in D.C. about Selina’s upcoming visit to a pub.  Did I say super?  I meant on edge, as Dan is talking more frantically than before and downing Red Bull to give him a boost. 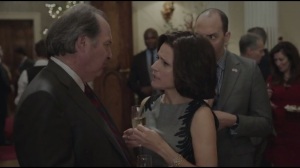 At the Deputy Prime Minister’s Reception, Selina receives an update from Ben on the President’s status: he would have attended, but he had to remain in the states in order to close a deal with China. 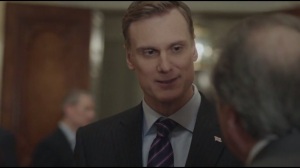 When Selina meets with the Deputy Prime Minister, he asks her about the accusations that the United States has been spying on them.  Huh.  That’s something I never read about in the Snowden leaks.  But no, Selina says, the United States doesn’t spy on other nations- they collect data.  There’s a difference. 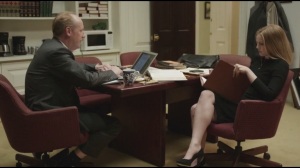 Mike and Amy don’t get to attend, though.  Mike’s preparing a speech for Selina and Amy is…well, Amy. 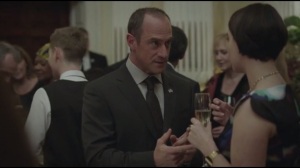 Oh, and Ray’s not doing the team any favors, either. 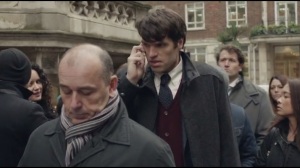 Jonah’s also in London because Jonah wills it, I guess.  But actually, he’s there spying for Maddox.  Kent, who is also in London, reports back to the team. 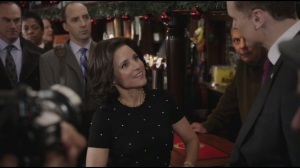 During the pub visit, Selina manages to hold onto her liquor longer than the Deputy Prime Minister, which is great, but it’s not so great when Selina repeats “Daniwah” over and over after hearing the crowd cheer it.  It’s actually “Down and one,” according to Amy, but whose keeping track, really?

Of course, with the speed at which news moves, the term trends on Twitter in no time.

The main event is Selina giving a speech to commemorate fallen World War I soldiers.  Gary chooses a relatively small hat, but Ray also isn’t a fan of that or Mike’s speech, which he feels is too wordy and could be simplified.

Amy, meanwhile, slips off to make a call to the German Chancellor, when she actually calls Jonah.  I’m not sure why she or anyone else on Team Selina would have or keep his phone number, but anyway, in a faux British accent, Amy tells Jonah that she has juicy details about a damaging story regarding Selina Meyer. 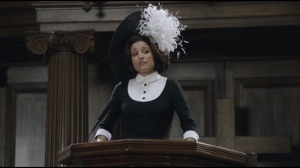 So when Selina gives her speech, not only is it overly simple in its style, but the hat Ray chose for her is anything but. 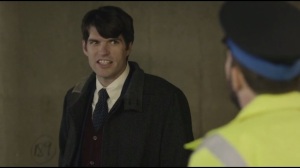 Jonah, thinking he’s walked into All the President’s Men, waits in a parking garage for his informant.  A man waiting in a dark garage for another man is already questionable by itself, as indicated by the look the nearby security guard gives Jonah.  When Jonah gets a call, he doesn’t help himself out by saying the words “Deep Throat” over the phone. 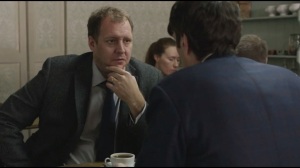 So he meets a journalist from The Daily Mirror at a coffee shop, even though the journalist insisted on a pub, and wasn’t keen on meeting in a garage.  Jonah mentions that before Ray was brought onboard Team Selina, he had a blog that has since been deleted.  Through Jonah’s expert research, meaning that he went on Google, he found screen grabs from the site: among the many things Ray wrote about, one of them was that obesity was a punishment.  Well, that could be a problem.  Jonah believes that the site could really hurt Selina and though the journalist isn’t originally interested in the story- you know, he has actual journalistic standards- he eventually jumps on board. 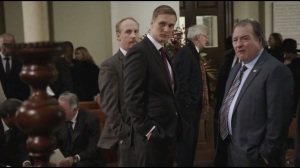 The Deputy Prime Minister congratulates Mike and Gary on Selina’s speech, though the Vice President is nowhere to be found.  He suspects that Selina is going to meet with the German Chancellor at a nearby chapel, and is proven correct when he can see the silhouette of Selina’s hideous hat through a window.  Hey, if Mike and Gary can’t see it, then the hat’s not there. 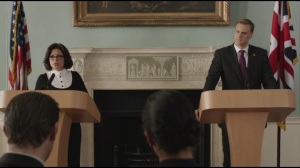 During a press conference, Ray’s blog is the main topic and Selina is unable to avoid it.  Hell, she’s forced to admit to the press that she was once a fat child.  Unlikely, but sure, let’s try and sympathize with Meyer for a moment.  That sympathy goes away when she learns that Ray wrote about obese children being possessed by devils. 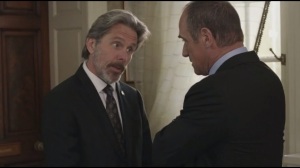 Kent fires Ray, and that gets no argument from Selina when she returns.  She’s not too concerned about the fat remarks.  Fat people don’t even vote, right?  Even though Selina had already planned to drop Ray, she soon makes another big decision when Gary tells her that Dan only hired Ray as a sex slave for Selina.  Yup.  The Veep just got pimped out and everyone knew about it. 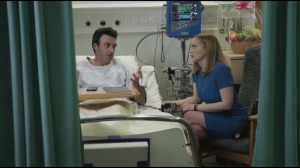 At the United States Ambassador’s residence, the team learns of tragic news: the first lady tried to commit suicide through a combination of vodka and overdosing on sleeping pills.  Kind of makes your problems seem not so big, huh?

Oh, and Amy’s the new campaign manager.  I guess that’s something.

Not even abroad can Selina Meyer ever catch a break.  This was another fun episode that, in Veep fashion, shows just how freaking hard it is to be Selina Meyer.  Anything, and I do mean anything, that could go wrong does go wrong.  Trouble follows her everywhere she goes, and finding out that Dan hired Ray as a sex slave was the final straw as far as whether Selina needed Dan as campaign manager anymore.

You get the feeling that she’s really fed up with her team.  Maybe it’s time she took Ericsson’s advice and got rid of her crew.  Keep valuables like Ben, Kent and Sue along since they actually get things done.

The only people who really come out on top this week are Amy and Jonah, but that happiness probably won’t last long. 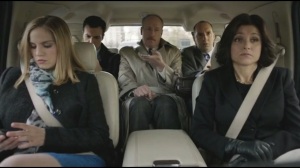 “Special Relationship” took a break from the fast paced world of American politics to the slower paced world of British politics.  With this came a lot of poking fun at American misconceptions about another culture, such as Selina debating with the pub owner about football and soccer.  There was some great real life humor as well, such as the revelation that the United States had been spying on other nations.

Because how could a superpower as noble as us do something like spy on others?  We’re completely transparent!  Just when we’re not.  I did also get a laugh when Selina said that the crew needed to drive back to the airport at Diana speed, but a little more careful.

Though the episode had its fair share of comedy, it wasn’t without its developments, as we see with Selina dropping Ray, dumping Dan for Amy, and learning of the First Lady’s condition.  For all the terrible things that happen with Team Selina, it is nice that they took a moment to reflect after learning about the First Lady’s condition.  They’re not completely selfish and out to satisfy their own needs and vanity.  Not completely, I said. 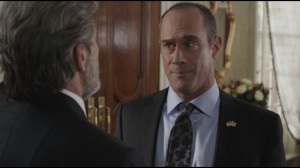 If this is the last we’ll see of Ray, I am glad Christopher Meloni brought some energy to the show.  Much more animated and light hearted compared to the gruff, more serious performance we’d seen him give on Law and Order: SVU.  Given how Ray was brought on to distract Selina from Andrew, does this mean Andrew will eventually be reappearing?  I mean, Selina did say she wanted him on board, but neither he nor Catherine appeared this week. 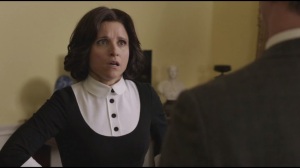 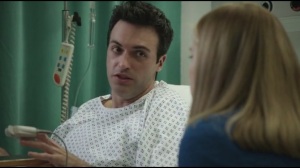 As for Dan, I guess the pressure just got to be too much for him.  He was already frantic last week, but the stress of the job collapsed under him.  Hiring a sex slave for Selina didn’t help, but his self-destruction was fun to watch.  Hell, his overreaction during the abortion debate telegraphed that someone like this would happen.  Hopefully he bounces back, but judging by the preview for next week’s episode, he appears to have mellowed out. 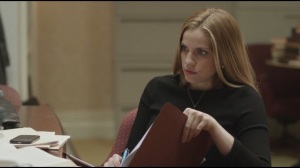 So, will Amy, ultimately, be any better of a campaign manager than Dan?  Maybe, but I doubt it.  I mean, I like Amy and I’m sure that, buried beneath all that self-centeredness she shares alongside the other characters, there’s some semblance of a hard worker, but hey, now it’s her turn.

I think she may last longer than Dan, but I’m just waiting for her implosion.  Hopefully that won’t also involve Jonah showing up to rub it in, as he did with Dan.  Her celebratory dance may be one of the last happy moments she has once her job as campaign manager kicks in.

The beauty of Veep is showing how such a group of clearly talented individuals all fall apart when they’re put together.  The turbulent world of politics just turns their days upside down even quicker.  Nothing ever goes according to plan, there’s always someone with a camera or recorder nearby, ready to record your every single moment, and you just can’t catch a break.

But Veep makes it so much fun to watch these characters implode and crumble that you put aside your politics and just enjoy the ride.

1 thought on “A Look at Veep- Season 3, Episode 7: “Special Relationship””