So Robert Kirkman has taken us two years past the events of “All Out War” and shown us what life is like for the folks in Alexandria.  The end result is a full-fledged, progressive community that shows signs of civilization coming back from extinction for the moment.  As is always the case with The Walking Dead, peace comes before danger.

However, I welcome the time skip because it allows us to see how these people can manage in a zombie apocalypse through hard work and commitment- exactly what Rick told Negan that the people would do.  Despite taking place so long after the previous issue, it’s tied directly to the events of “All Out War” both by the world that the people have created and the ending scene with Carl.

Now that they have a community, they have the opportunity to make it thrive, to achieve some semblance of what their lives were like before the world went to hell.  Obviously roamers are still a threat, but given how quickly Jesus and Heath were able to lure them away, it’s clear that, for the time being, roamers are becoming less of an issue. 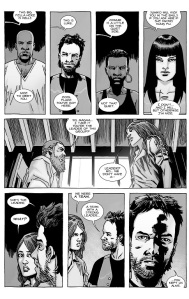 To awkwardly segue onto the newcomers, I’m interested in how well they’ll be integrated into the group.  They have every reason to be suspicious as to why their weapons are confiscated, just as much as the Alexandria folks have every reason to withhold details about their location.  Any tidbit of information is valuable and can easily be turned against you when you don’t know who you’re dealing with.

You take weapons away from strangers because you don’t know them.  You don’t give away your location because you don’t want the possibility that they’ll try to overrun and take it over for themselves.  However, the fact that Magna and the rest of her team are willing to prove themselves by staying shows that they don’t distrust strangers just because their weapons have been taken away.

This leads me to Rick, who has really matured into a seasoned leader even though, as he states, he was uncomfortable with the position.  His leg hasn’t fully healed since his fight with Negan and he now has a prosthetic for his right hand.  Despite his handicaps, Rick maintains the commanding presence he’s had throughout the comic’s run.

He comes off as wiser in two years time in that he’s willing to have a civil conversation with the survivors rather than just turning them away outright.  He tells them that taking their weapons was non-negotiable, and given everything that Rick and company have been through, before and after meeting Negan and The Saviors, they have every reason to be on their guard. 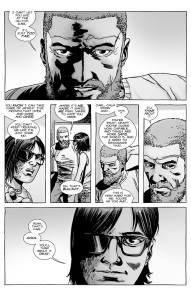 But Rick at least has time to still be a father, though he’ll have to play a more active role now that Carl has grown up.  He’s a teenager now, but he still looks younger than his TV counterpart.  As such, Carl’s slowly maturing into a man and wants to take responsibility by taking up a trade.  Admirable, but obviously Rick would want to keep his son around.  Since Rick left behind the phone he used to speak to Lori, he’s left that part of his life behind him.  He wouldn’t want his son to suddenly leave with the possibility of never returning, even though he knows that Carl is capable of handling himself. 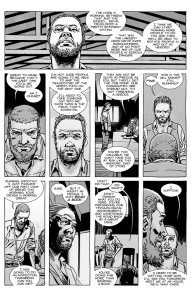 I like how Eugene is slowly being greater importance.  He started off as a liar, but now he’s becoming vital to the group’s survival, as we see when Rick stresses that Eugene cannot go out anymore.  I guess if he sticks around, we’ll eventually find out what the issue is between him and Rosita.

As for the ending conversation, I’m surprised how Negan didn’t drop a single swear during his talk with Carl.  From how the two converse, I get the impression that Carl’s been coming down to talk with Negan for quite a while.  Makes sense.  I’m sure there are things Carl just can’t talk about with Rick or Andrea, not to mention anyone else in the area.

Negan is imprisoned and not the same man he was before, and he did try to have a heart to heart with Carl during “All Out War,” so I sort of understand why Carl would confide in him.  Though since Carl still wants to kill Negan, it’s clear that he hasn’t forgotten about what led to Negan’s current imprisonment.

“A New Beginning” was a nice change of pace that advanced the storyline and put these characters on the path toward rebuilding civilization.  Sure, there are things that we haven’t seen yet: Michonne and Ezekiel are not here or mentioned at all and we don’t know whatever became of The Saviors.

Also, neither Maggie nor her baby that I assume she’s had by now are here, but it is mentioned that Maggie is still at the Hilltop.  However, trying to cram every single storyline into the first issue of a time skip would be unnecessary.  The new status quo has been established and now we just watch how everyone pulls their own weight and works toward bringing back the civilization they once knew.