You can’t really call Rick Grimes a reluctant leader. As an officer of the law, it’s in his nature. So when people approach and say he should lead, they’re not doing it just because they’re impressed with his leadership abilities. That’s part of it, yes, but more than that, Rick knows how to take charge of a situation and turn it around. It’s why so many look to him for guidance even when it’s not his call to make.

While he did have the idea of taking over Alexandria, he and his did assimilate within the community. The Commonwealth, by comparison, is not his home. Could he lend a hand in running things? Sure. But he’s not looking to rule it. We know that. Whether Governor Pamela Milton knows that is another thing. 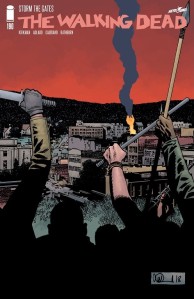 We ended the last in a similar position to one before where Mercer believes Rick is the leader that the Commonwealth needs and deserves. Given how things are coming apart at the seams and growing distrust among the residents, it’s not hard to understand why Mercer needs change to happen right now.

In Mercer’s mind, Pamela at least respects Rick and sees him as one of the elite. Part of that is true. Pamela does respect Rick, but Mr. Grimes hardly sees himself as part of any elite. As he’s explained before, everyone in Alexandria does their fair share, him included. Just because he leads doesn’t make him any more valuable than anyone else. He cares for people, but doesn’t see himself as any better than them.

That’s not how things operate in the Commonwealth. Plus, it seemed for a moment that Pamela could warm up to Rick’s way of thinking. After all, she joined him in helping clean up the city. Rick is valuable to Pamela, but her soldiers are expendable. More than that, with everything that’s happening, Mercer knows that people don’t trust the guards. To him, if there’s going to be change, it should happen sooner rather than later.

Doesn’t really work that way for Rick. We’ve seen a few interactions that he’s had with citizens, but that’s about it. In addition to his speech, the Commonwealth citizens may have a general idea of how Rick Grimes operates, but they haven’t spent any real time with him. It takes time to change, but they may not have that luxury.

Michonne, meanwhile, rushes to Elodie and finds that she and her friends have taken up arms. They’re ready to go out and fight. I don’t know who thought his plan up, so I’m just going to assume that it was Elodie. Anyway, they’re fed up and are willing to put their lives on the line. How very noble of them. But Michonne shuts that shit down immediately.

The woman just got reacquainted with her daughter. She’ll be damned if Elodie is ripped away from her because something of something stupid. So Michonne basically tells them all to sit the fuck down and stay out of it until she says otherwise. Trust Michonne to be the protective Mama Bear. Now I’m sure Elodie and her friends would be able to handle themselves, but Michonne isn’t going to take that risk. I doubt any parent would.

Perhaps after time had passed, but not right after they’ve just been reunited. Rick, for example, would have no problem letting Carl go out into battle, but they’ve had years to fight alongside each other. Not the case with Michonne and Elodie. Not yet, anyway. 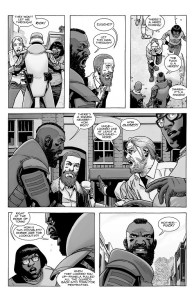 Having escaped the approaching herd, Eugene and Stephanie arrive in the city. Before this, we get a brief scene of Stephanie explaining to Eugene that there have been rumblings about overthrowing the current power structure. She figured that’s why there was smoke, but it turns out to be, I’m guessing, from when Mercer’s cell was blown open. But the two manage to inform Rick and Mercer about the approaching swarm.

See, there are supposed to be lookouts, but apparently all of the guards were pulled into town after Mercer was arrested. This would just fuel Mercer’s argument that change needs to come fast. No one was watching the city, so how can Pamela be trusted to rule when no one is keeping a lookout when roamers approach? Rick’s idea of negotiating with Pamela slowly doesn’t look like it will work.

Really, it’s time for everyone to gather together, as Michonne meets up with the group from Hilltop. From there, she, Carl, and the others join up with Rick just as the swarm approaches. Like in “No Way Out,” Rick instantly takes control of the situation, as he and Mercer have everyone get inside and keep down. That way, then can at least wait out the swarm.

By the way, it’s brief, but I did like Rick telling Carl that he wishes they got to meet up under better circumstances. It’s easy to forget that Carl has found a new life for himself at the Hilltop, so it’s always good when he gets to meet up with his father. Sure, the circumstances aren’t idea, but the two still get a chance to reunite, however brief. 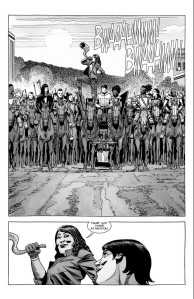 But then the literal cavalry arrives. Maggie has arrived with backup from the Hilltop- Magna even uses the same horn that was used to distract roamers in Alexandria. With this show of force, the Commonwealth citizens can see for themselves how these other communities operate like a well-oiled machine. Rick didn’t know Maggie was coming, but he’s certainly not going to turn down the help. 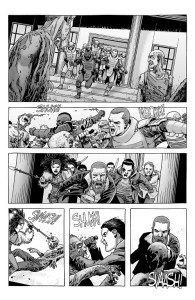 Plus, hey, another reunion. So once the herd is thinned out, it’s time to take out the stragglers. Mercer’s group heads out first for good reason. As we’ve seen, their armor protects them from roamer bites and scratches. Rick and company follow soon after in a pretty kick-ass sequence that I wish had gone on for a little longer.

Hell, I think you could’ve ended the issue with everyone standing victorious over the roamers. But there’s no conflict from that. I did enjoy Rick’s brief talk with Maggie, with her confirming that yes, she only came to Commonwealth based on a hunch. For what it’s worth, that hunch ended up panning out for the better. Though her arrival proved beneficial, it couldn’t have come at a worse time as far as Pamela is concerned.

As I said, ending the issue victoriously leaves us with no conflict that tides us over into the next issue. Instead, we get Pamela arriving and…acting quite delusional, if I’m being honest. She turns on Rick, saying that this was part of some grand plan to usurp the power and leadership from her. The fact that this new army has arrived and is allied with Rick just helps her argument.

Of course, Pamela is flat-out wrong, but she’s not going to give Rick the time to explain. She’s not manic or anything. It’s just that she isn’t getting the full picture. There could be time to explain everything, but Pamela is too focused on this supposed betrayal. Now that she’s got the Greenville army standing behind her… 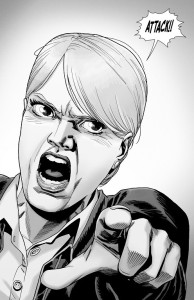 …she orders them to attack. This bears some similarities to when the other Governor arrived at the prison and ordered his followers to open fire on Rick there. I’m curious if these guards, like Mercer, may also be ready for a change in leadership. Could Pamela’s irrational behavior be setting her up for a fall? Possibly, but we’ll see if we’re headed for more explosions in the next issue.

Overall, this was a great read. Enjoyed seeing the characters from Alexandria and Hilltop reunite and come together to deal with the swarm. After dealing with Alpha’s massive herd, this was a walk in the park by comparison. But how will everyone contend with Governor Milton? We’ll see.