I guess the roamers are quieter than we thought.

So we left off the last chapter with Mercer being imprisoned, Rick trying to calm the approaching storm, and a group from the Hilltop arriving at the Commonwealth. During their arrival, they run into a small herd and managed to lead them to a rail yard. The same rail yard where Eugene and Stephanie are working without protection.

But hey, roamers tend to make a lot of noise, in particular when they’re moving in a crowd. So of course Eugene and Stephanie would hear, smell, and outright see the herd before they’re within striking distance, right? For something otherwise to happen would be ridiculous and unrealistic, even for a comic series involving the literal walking dead.

Son of a-come on, Robert Kirkman! Rick talked before about hearing an ocean of the dead when dealing with Alpha’s massive herd. You’re telling me that Eugene and Stephanie can’t hear the sound of a much smaller group of roamers just a few feet away from them? Not until the very last second? Not even a bit, but very ridiculous. There’s no reason that the two of them shouldn’t have heard or seen those roamers.

Whatever. Anyway, Eugene and Stephanie find themselves surprised by the herd, so they take shelter in one of the train cars. But don’t worry about them, folks. They’ll be just fine. I still think Kirkman is trying to add tension when there shouldn’t be since there’s no way in hell Eugene and Stephanie shouldn’t have heard that. Regardless, we’ll return to these two later. 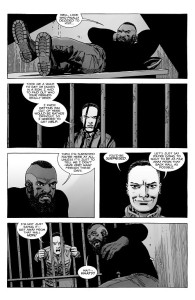 So Laura is picking up the pieces from where Dwight left them. We last saw her coming face-to-face with George, introducing herself as a friend of Mercer’s. Now she’s arrived and both she and George manage to blow a hole in Mercer’s cell.

While Mercer acknowledges that he doesn’t have many friends, he has enough allies to help him kick start the plan to liberate the Commonwealth. George notes that he may have overdone it a bit, so I’m wondering just where in the hell he managed to get his hands on that kind of firepower.

The explosion is heard throughout the Commonwealth, from Michonne and Elodie to the Hilltop group and, of course, Rick and Pamela. Whatever sort of quiet there may have been at the time is now gone. While things were still tense from Dwight’s death, as well as the riot from not too long ago, the situation in the Commonwealth has literally exploded. 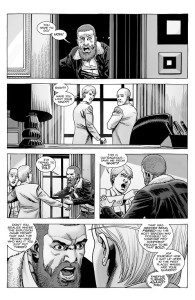 Given how much blame he has placed on himself for the escalation, Rick takes control of the situation and goes straight to Pamela. While the Governor has already been told off by Mercer, she’s probably not thinking that a coup is underway. But Rick has seen enough betrayal to let Pamela know that no, the guards have turned on her. He even made sure to barricade the doors on the off-chance that people came for her.

Wouldn’t you know it? That’s exactly what happens, as Sebastian notes when he enters. Trust Rick Grimes to have every possible angle examined, you know?

Then comes what might be my favorite part of the chapter: Rick telling off Sebastian. Seriously, I doubt anyone likes this little shit. So when Sebastian gets mouthy, Rick shuts him down and starts to choke him, saying that everyone hates Sebastian’s family, but that they hate him most of all. Like Rick choking Brandon, this feels so satisfying to see someone like Sebastian put in their place.

Unlike Brandon, though, Rick doesn’t threaten to kill Sebastian. I imagine he would like to, though, and I don’t think anyone would blame him. But hey, no point in making more enemies. Pamela doesn’t bite Rick’s head off for choking her son- she merely wants him to stop. Though one wonders if she wouldn’t mind Sebastian getting smacked around a bit for being such an asshole to…well, just about everybody.

Something to consider, Governor Milton.

But either way, Rick leads the Governor on the road, where they run right into the Hilltop group plus Princess.

Back in the train, Eugene makes a way out for him and Stephanie by pulling a MacGyver. Or rather, he combines tape and a fire extinguisher in order to have the spray distract the roamers. It’s an ingenious plan, to be fair, and given Eugene’s knack of getting out of a jam through his ingenuity, it was just a matter of time before he figured out how to get him and Stephanie out of this mess.

But more than this, the scene is important for Eugene helping Stephanie get some courage, as well as remembering how he grew out of his own cowardice. Eugene references the events of “No Way Out” and how Rick rallied the residents of Alexandria to battle the dead.

What seemed like an impossible undertaking, between the snow and the roamers ended up becoming a great victory for the Alexandria Safe Zone. Rick led the charge and everyone, Eugene included, followed his lead. It marked a turning point for everyone because this was when they stopped running. They fought to protect their home.

With Eugene in particular, he learned to control his fear and use it as a tool. Him being the handy man, as this chapter showed, he can turn practically anything into a tool. With that, he’s able to encourage Stephanie to buck up and fight. It succeeds, as the two manage to escape the train car and flee to safety.

We get a brief, but nice conversation between Rick and Carl, with Rick telling his son that he shouldn’t have come, given how bad the situation. I always enjoy any time we get to see father and son spend time together, but what I enjoy here is that, despite his warning, Rick isn’t talking down to Carl. He’s not telling his son to go back to the Hilltop or stay out of the situation.

Quite the opposite. Rick knows by now that his son is more than capable of handling himself. So when Carl asks his father what he can do, Rick tells his son that he will know what to do. Rick doesn’t need to give his son instructions. I like this. Again, it’s good to see Rick having a chat with his son, but also just an acknowledgement that Carl is more than capable of making up his own mind.

But Rick eventually manages to confront Mercer, who is having trouble handling the situation. While some of the citizens have turned against the guards, that doesn’t mean that they’re on Mercer’s side. The unrest does not subside. In fact, this coup could probably lead to more unrest. Hell, based on Rick’s observation, it already has.

Mercer even threatens to shoot the citizens after one of them throws a bottle at him. He may think that things are going to get worse, but they already have. He just needs to look around him.

Then comes the ending that we’ve sort of gotten before. Mercer says that if the people won’t accept him or Pamela, maybe they’ll accept Rick. We’ve gone down this route before with Mercer saying that Rick is the leader that the Commonwealth needs, so this isn’t exactly new territory. It puts Rick in an even more uncomfortable position than he’s already in right now.

But with Mercer free and his coup out in the open, what will happen now? I don’t think Pamela would have him killed for treason. Exiled, maybe, but she could still find some use in him. As for Rick, I don’t think he would accept leading yet another community. Alexandria is enough, but a community miles and miles away? Not a chance.

But we’ll find out how the Commonwealth moves forward with this coup next time. See you in April.