Time for escalation. Pick your side. 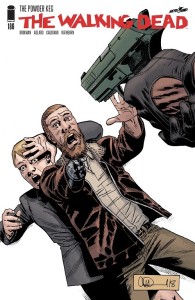 When characters are killed off on The Walking Dead, you have a certain reaction based on the character and circumstances, like the border in issue #144. But there are occasions where the plot and everything surrounding the death leave you a bit conflicted. That’s where I am right now with this issue as Rick and company continue to express skepticism towards the Commonwealth. But I’m getting ahead of myself. 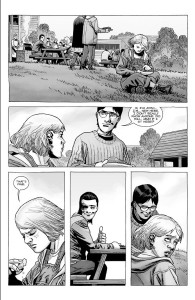 We get some brief follow-up on Sophia’s [mis]adventures of getting laid as we see Josh, one of the former Whisperers, trying to talk with her. And while Sophia isn’t exactly enamored with Josh’s innocent intentions, I do love Carl’s smirk as he watches from afar. Perhaps he’s trying to set the two up? It’d be kind of cute watching him play matchmaker if that’s indeed what’s happening. 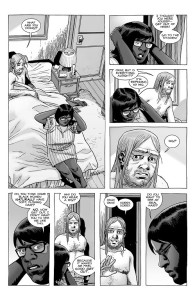 We get a very brief scene between Eugene and Stephanie after their kiss and it’s mostly just Stephanie showing her real hair. Yeah, she wears a wig. But she seems a bit embarrassed at first, while Eugene is fine with how Stephanie looks either way. 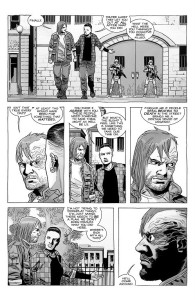 Take Alexandria, for example. Sure, Rick realized upon arrival that there was a prime opportunity to take the place, but he didn’t do it on Day One or Two. He bided his time and got to know the people there. He became acclimated to Alexandria. Dwight, though, isn’t in the mood for waiting. He believes that there’s enough unrest in the Commonwealth that people will flock to his side.

He’s not completely wrong. Dwight saw for himself how people reacted when he was taken away by the guards. The people are tired of the authority figures pushing them around. So while Dwight’s eyes are open and he can see the bigger picture, he still should be cautious with how he proceeds. Even if he thinks that Rick will come around, a plan like this can’t just be done overnight. 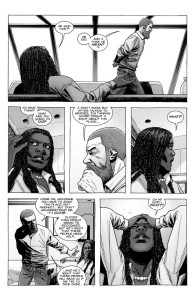 And while Rick may agree with Dwight’s overall plan, he disagrees in execution, even after Mercer called Rick the leader that the Commonwealth needs. As he tells Michonne, the people there need help and they would no doubt back Rick if he joined Dwight in a takeover. He’s already explained how he’s not a fan of the Commonwealth’s class system and believes that things need to change.

Michonne agrees with that much, yes, but the stakes are different for her compared to Rick and Dwight. She’s been reunited with her daughter after so long. And from the trial, she’s become more acclimated to the community than either Rick or Dwight. So it makes sense that she’s being even more cautious than Rick, saying that people need Rick’s mind, not his violent tendencies. Show the people a better way and they’ll follow.

The problem is that Dwight might be too hot-headed for Rick to even have the time to show the people a better way.

Plus, we see the ramifications of how Michonne’s actions are affecting people’s attitudes towards Elodie. I’m not showing the panel since it’s not necessary, but we see Elodie having lunch with some friends. They inform her that since Michonne defended the guards, people are pissed off and want to know what side Elodie is on and where she stands. Not that Elodie even saw it as sides until now.

At this moment, she may be forced to make a choice. 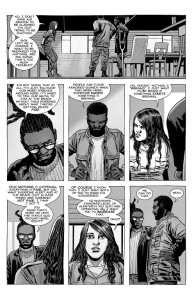 Our one and only scene at Alexandria involves Magna telling Heath and Vincent to up the security. Not that there’s any danger, but just in case. It’s so people can stay alert even though it’s pretty quiet at the Safe Zone right now. This feels a step away from Negan’s plan for Rick to turn the Whisperers into this scary boogeyman- get the people in a frenzy and make the threat seem larger than it is.

But in this case, I suppose Magna just wants the people to feel even safer than they already area. Though I have to wonder why Rick left Magna in charge of all people. I love Magna, don’t get me wrong, but why not someone with a bit more seniority? Why not Heath? Especially since he’s from the Alexandria Safe Zone. 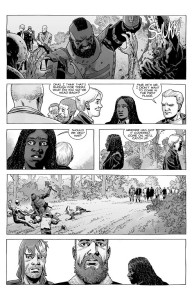 Whatever. Back at the Commonwealth, Pamela leads a group out on what Mercer later refers to as a hunting party. As in Pamela guns down a roamer while Mercer takes care of the rest in order to create the illusion that Pamela’s doing something. Well, that’s one way to distinguish yourself from the others for sure- refusal to get your hands dirty.

This is weird. I mean, not only is it deceptive, but we saw Pamela willing to get her hands dirty when she helped Rick clean up after the riot. She didn’t have to do that, but she choose to take part. So why even continue this sort of charade? If anything, I would think Rick’s way of thinking would make her even more inclined to be more active. Nonetheless, it’s all a ruse.

It’s like when a politician says that they’re one of the people, but after their rise to fame, you barely see them return to their roots. They’re too good for that. And it appears to be the case for Pamela as well. You leave out a few stragglers for the boss lady to get so people get the impression that she’s actually doing something. All an act, but as Mercer tells them, it’s past time for a change. 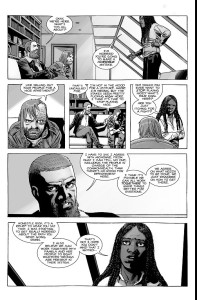 So Michonne summons Rick and Dwight to squash any potential beef, but Dwight is still too far gone at the moment. With some persuasion, Rick could probably calm him down, but Michonne actually agrees with Rick in that things need to change. They don’t agree on what to do, but acknowledge that things should be different. 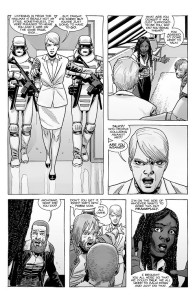 But then Michonne takes it a step too far by actually inviting Pamela to this meeting. First off, why? This would only lead to more problems, and as you’ll see, it does. Bringing Pamela would justify to Dwight how Michonne isn’t seeing the bigger picture like he and Rick do. And Pamela not just tells Dwight to leave the Commonwealth, but brings along her guards as a show of force.

If Dwight needed any more of a reason to distrust Pamela and, now, Michonne, then the gift has been wrapped and hand-delivered to him. 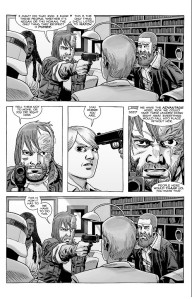 I do like Dwight acknowledging what he’s learned from past power-hungry people, like when he acknowledges Negan’s actions, and how people like them only respect power. To Dwight, the only way to remove a tyrant from power is to kill them. This sort of thing can’t be done diplomatically, more so when Michonne surprised them by inviting Pamela to this discussion.

But right now, Dwight is a loose cannon and pointing a gun at Pamela, the leader of the Commonwealth. How do you solve something like this without things possibly getting worse? 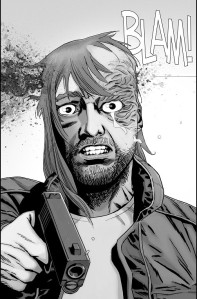 You shoot and kill Dwight. That’s what you do. 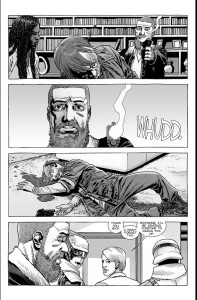 And it feels like a spur of the moment choice for Rick, who doesn’t look satisfied at all by what he’s done. But then, he didn’t seem to have a choice. Had he shot Pamela, the guards would’ve probably killed him and Michonne. And again, while Rick agrees with Dwight, he doesn’t think that he should be moving this fast as far as changing things.

It seems that Rick only shot and killed Dwight just to keep things from escalating further, and I get that, but I’ll get into my issues with it in a bit. 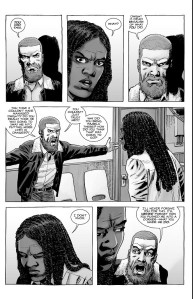 Actually, right now, because the only other thing that happens between now and Rick confronting Michonne is learning how heartbroken Laura is over Dwight’s death. So Rick chews out Michonne for inviting Pamela- which was a real dick move- because he believes that with some time, he could’ve talked down Dwight and made him calm again.

Indeed, even when Dwight first proposed taking over the Commonwealth, Rick had a very civil conversation with him. They disagreed, yes, but at least they talked out their differences. And Dwight is one of those characters who could ride the line between good and bad, more so when he was a full-fledged Savior. Here, he’s not acting out of villainy, but his frustration with Pamela’s rule. He wanted to upend the system overnight.

Rick saw a reason to change things, but Dwight was moving too fast. And in a quick decision, Rick had no choice but to put Dwight down. But had Michonne not invited Pamela in the first place, Dwight would still be alive. In a way, yes, Dwight’s death is Michonne’s fault because she didn’t tell Rick and Dwight that Pamela would be attending that meeting.

So this major turn of events will just drive a wedge between Rick and Michonne, who are already on rocky ground based on how they both perceive the Commonwealth. Michonne’s actions, as far as Rick is concerned, pushed him into a corner. Yes, Dwight was unhinged, but Rick could rationalize with him. Michonne tells Rick that killing Dwight just stopped a war, but to Rick, he may have already picked a side.

Just like Elodie’s conversation, it’s becoming increasingly clear that the lines are being drawn. I’m not happy that we’re getting this conflict at the expense of killing Dwight, mostly because this could’ve been avoided altogether, but now I’m just curious if the bond between Rick and Michonne will crumble going forward. We’ll hopefully find out next time. See you in issue #187.