Time to head back to Alexandria.

But before doing that, we have to address that cliffhanger from last issue, and we jump right into that with the survivors from Alexandria learning what Elodie meant when she said that people have to know their place. 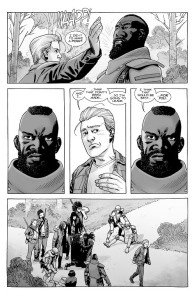 So it is indeed about rank and class, and Sebastian, being the shithead son of the governor, throws around his weight and can get away with striking anyone he wants and is free to, as his mother says later, fuck his girls. He’s that spoiled brat that you have to endure because he’s related to someone much more powerful, and you can’t retaliate because you know it will come back to bite you in the ass.

I wager that a little shit with Sebastian no doubt has a lot of enemies in the Commonwealth. And I’ll go even further and guess that Pamela knows about this, but doesn’t do much about it. That would explain why Mercer was blowing off some steam. Even though Mercer may hate Sebastian’s guts, he sure as hell doesn’t fear him.

In fact, it’s the other way around when, after striking Mercer to prove a point, Sebastian goes off, realizing that he’s probably seconds away from getting his ass handed to him. Mercer may be sitting on a lot of anger but, as Elodie says, he’s not interested in running things, so at the very least, he’s not planning a coup of some sorts.

Following this, we get a proper explanation of the class system from Stephanie and Elodie. And it’s a system that divides people, yes, but in the grand scheme of things and in terms of rebuilding society, it makes sense. In essence, your position at the Commonwealth is based on what you did in your previous life. If you had a high ranking or paying position, that translates to becoming part of the upper class.

Rebuilding the world would involve at least some continuity from everyone’s previous lives since, once the world went to hell, everyone is pretty much in the same boat. Most of the time. But, moving on, you’re not stuck in your status, as people have the opportunity to grow and move up after their evaluations. It’s kind of like getting a promotion, but just in life. It gives people a goal they can strive to attain.

And if you’re going to try and recreate the old world, then people will inevitably be separated into classes or statuses.

But it’s Magna who is the splash of cold water onto everyone’s faces. She abhors this idea of haves and have nots-  going as far as reminding Michonne, who seems on board with this, that she was a lawyer in her previous life. Magna’s anger is justifiable. Why separate people into classes and sew more division among people? It sounds pretty screwed-up from her perspective.

But, as is pointed out, the survivors do already have something like this in play. Not everyone at the Hilltop lives in the mansion. Hell, the structure at the Sanctuary with the Saviors was partially built upon this, as not everyone there was a fighter. Some were workers, some of the women were Negan’s wives, and many were just regular people living their lives.

So, in a way, the survivors already do or have experimented with a system, just with a much less formal structure. If society is to rebuild from the ground up, something like this may be unavoidable. Even still, I like that Magna is the lone, dissenting voice because people would take issue with an outdated structure that splits people by class. 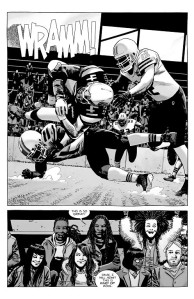 Following this, we get a nice little montage of the survivors enjoying life in the Commonwealth and learn more about the community. For one, remember how Princess easily took care of the guards in the last issue? Well, turns out that those guys are merely trainees. Okay, I suppose that makes it somewhat easier to swallow that she dispatched of them no problem.

They’re quick moments where the characters just enjoy life for what it is. Elodie figures that each day where you don’t die means you deserve a cupcake, Stephanie shows Eugene around, and everyone gets to enjoy a football game- and this is where Magna starts to come around. Imagine that. Football in the apocalypse. Never thought I’d see that.

But anyway, soon enough it’s time to head back to Alexandria, with Pamela going with the survivors. Her conversation with Sebastian is telling. She knows about the shit he pulls and, for the most part, doesn’t seem to do much to stop him, but she also knows that her son is capable of more. She doesn’t put him in his place, but does acknowledge that he hasn’t found his place.

And, to Sebastian’s credit, he also acknowledges that he’s not applying himself. He’s still acting like an ass, but at least he’s aware that he isn’t living up to his potential. I suppose that has to count for something.

Meanwhile, not all of the survivors are going back to Alexandria. Given that she’s reunited with her daughter, it makes sense that Michonne would stick around. Hell, it’d be more of a surprise if she left, or at least didn’t bring Elodie with her. But she’s back with her daughter. Nothing between Earth and hell would keep them apart again.

And, as her conversation with Lance indicates, she could be of some good since the Commonwealth could use a lawyer like Michonne. So when Michonne gives her sword to Eugene, she’s leaving that part of her life behind. I’m sure that at some point, and if the plot demands it, Michonne will eventually return to Alexandria and reunite with the others. Would be a long journey, but the option is there.

What follows is the journey back to Alexandria, and then I’m reminded that yeah, Princess hasn’t been to Alexandria either because the others met her on the road. So this will be as much of an introduction for her as it is for the people from the Commonwealth. Though I do like Magna saying that it’d probably be better if Princess lived at the Hilltop instead of the Safe Zone.

Side-note, I am very curious to see how every reacts to her just as much I’m looking forward to seeing Rick come face-to-face with Pamela. I could see Princess trying to be buddies with Carl and Sophia.

Even though we’re outside the Commonwealth walls, you still have Pamela living a step above the other survivors, who are sleeping outside. That in and of itself isn’t an issue because they’ve probably slept in worse conditions. But look at Pamela’s tent. No doubt she’s got room to fit everyone else inside, even if they squeezed together.

But inside, Pamela and Mercer are discussing the survivors and their usefulness, Eugene in particular,as his smarts could prove resourceful for the Commonwealth. Given how Eugene got the radio to work, kicking all of this off in the first place, that makes sense. And with Stephanie at the Commonwealth, Eugene would have another reason to return. 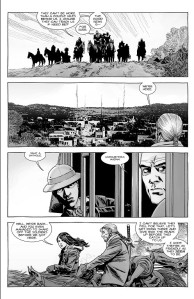 Before that, though, we have to return to Alexandria, and we’re left on what I guess is supposed to be an ominous cliffhanger, as we have Eugene and Magna riding ahead to warn Rick about the Commonwealth folks approaching. It helps to give the people in Alexandria enough time to prepare for these strangers entering their territory.

Sure, there’s no reason to think that the Commonwealth folks are bad people- if not just a bit snooty if they’re in the upper class- but it doesn’t hurt for Rick to at least be aware that visitors will be approaching. Eugene saying to Magna that the visitors should be friendly for their own sake just feels like ending on a dramatic moment. I doubt any sort of negativity rising from this confrontation would end in a standoff or gun fight.

But hey, we’re back in Alexandria, Michonne has made the Commonwealth her home for the time being, and Rick is now aware that visitors will soon be knocking at his door. How will this confrontation go? We’ll find out next time.