But…what do you mean by knowing your place? 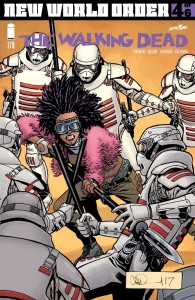 There’s a constant to these new communities, whether it’s the Hilltop, Woodbury, or Alexandria when Rick and company first arrived. Everything seems peachy-keen, fine and dandy, but there’s this feeling of dread that there’s a seedy underbelly amidst all the supposed peace and calm. The same applies to the Commonwealth.

Even though the survivors coming into the community have every reason to be suspicious right off the bat, they seem, at the moment, to be growing accepting of what the Commonwealth has to offer, especially in light of Michonne reuniting with her daughter. 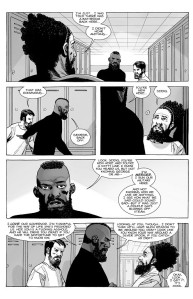 It’d be easy for Siddiq to believe, based on what he heard, that George and Mercer are planning to start a revolt, but good on Mercer to shut that shit down immediately. They see right through Siddiq’s bullshit, but don’t make things confrontational. This could have escalated right here and now or Siddiq could have alerted the others based on incomplete information, but nothing gets out of hand. For now.

Plus, Siddiq isn’t really one for confrontation. Put Rick in Siddiq’s place and there’d probably be a standoff here, but this is Siddiq, so Mercer can tell that Siddiq won’t be a problem.However, Mercer does point out that Sebastian probably won’t be around someone like Siddiq. More on that in a bit. 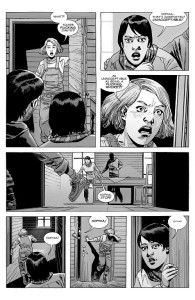 The bulk of this issue is spent at the Commonwealth, but we do go to the Hilltop to follow up on Maggie’s time with Dante…and Sophia discovering it. Now, even taking into consideration that she called Maggie a whore, Sophia is way out of line. She rightly states that while Maggie isn’t her blood mother, she’s come to accept her as Mom, just as Carl did with Andrea.

She’s just a child and there’s a lot she doesn’t understand. In her mind, Maggie’s heart should still only belong to Glenn. There’s nothing wrong with holding onto the one you love even after they’re gone, sure, but like Maggie says, Glenn has been dead for a long time. Maggie loved him and she’ll never forget him, but Maggie is at the point where she wants to be happy with someone else.

She can’t do that if she’s still pining for Glenn. That part of her will never go away, and that shouldn’t inhibit her from being able to feel for another person. Plus, Maggie is still trying to make sense of her relationship with Dante. She hasn’t thrown Glenn under the bus. She’s just finally at the point where she can open up and be in a relationship with another person.

It’s easy to understand why Sophia is angry. Particularly considering that she had to find out based on gossip instead of Maggie telling her. But again, Maggie is still making sense of this. It’s not like she intentionally withheld information from Sophia. Plus, in the grand scheme of things, who Maggie gets in a relationship with isn’t really any of Sophia’s business. But hey, she’s protective of her mother.

She just has a lot to learn about all of this and isn’t comfortable with her adoptive mother being in the arms of another person. When she later talks about this with Carl, she learns just how different the two approached this. Unlike Sophia, Carl wanted his father to be happy. Andrea wasn’t Lori, but she made Rick happy and that’s all that mattered to Carl.

Pity that now neither Sophia nor Carl is alive on the television show, so we probably won’t get something close to this unless it’s remixed.

But back to the Commonwealth. We get a brief conversation with Elodie telling Michonne that, for the longest time, she still harbored anger towards her mother for abandoning her. But despite all the rage Elodie felt, despite how she may still not want to see her mother, and despite all that she’s been through, Michonne isn’t going anywhere.

Michonne accepts her past sins, and Elodie is certainly able to move past them as well. After all, as she said, the moment she reunited with her mother, all that anger dissipated. Her mother is back and she’s not letting her go again.

Eugene also gets an opportunity to speak longer with Stephanie, who I’m guessing was out in the sun a bit too long since her complexion is completely different. What happened? Did she go for a tan between her introduction and now?

Whatever. Anyway, she and Pamela make it very clear that there are rules in place, especially in regards to the radio. Neither Stephanie nor Eugene immediately told anyone if they encountered a new person while they were communicating.

We also learn around this time that Pamela herself will be going to Alexandria…which is a bit odd. After all, that’s the leader of your community. Anything could happen between the Commonwealth and Alexandria. I get that Pamela will want to see the Safe Zone for herself, but it’d be better if she just sent an envoy in her place. Hell, send Mercer or even Lance, given that he was the one to first meet the survivors.

Plus, if Pamela gets killed, then that could easily be spun into saying that it’s because of the people from Alexandria. No need to send your leader when you’ve got plenty of people who would also be willing to make the journey.

Hell, send Sebastian. Maybe he’ll get killed on the road or get put in his place. So he shows up to cause some drama by putting the moves on Yumiko. When that doesn’t work, he ends up shoving Magna. I’m not sure what Sebastian’s upbringing was like, but it’d be an understatement to call him a spoiled brat. He’s an outright ass who oversteps his boundaries.

Or maybe Pamela hasn’t just whooped Sebastian’s ass in a long time. Either way, this kid needs to be taken down a peg because he walks with this air of superiority, as if he’s above everyone he encounters, even Mercer and his own mother.

And while I understand the survivors not wanting to rock the boat since they’ve earned some goodwill, remember that Princess herself is still a newcomer, both to our group and the Commonwealth. So she’s got no problem picking a fight, both with Sebastian and the guards.

The fact that she takes out as many guards as she does, though, makes them look pretty weak. Princess makes an offhand comment about the armor, and while that could slow them down, it’s disappointing that they’re dispatched of so easily by a newcomer. It doesn’t make Princess look like a badass, so much as make the guards seem incompetent.

But luckily, Mercer shuts that shit down immediately. The other guards might be a pushover, but he isn’t. Even still, Sebastian doesn’t buckle, going as far as saying that he’ll throw them all out, including Mercer. And when Elodie tries to help him up, he attacks her as well. Sebastian is a loose cannon who would probably talk himself into getting killed.

This is the point when Michonne is just about ready to intervene, but Elodie stops her, saying that they need to know their place. What in the actual hell? Mercer hinted at this when he said that Sebastian wouldn’t be around Siddiq, while Stephanie mentioned to Michonne that things work a certain way in the Commonwealth…so is this a class issue?

Right now, there doesn’t seem to be any kind of socioeconomic divide between the citizens here, but then, we’ve just scratched the surface in the Commonwealth. So I’m trying to make sense of what Elodie meant by people knowing their place. Are people seen differently based on class? Upbringing?

I can’t fathom such a way of thinking would exist in the apocalypse, but hey, even the Saviors were divided into different classes, so it’s not uncommon. Still, this sours what was initially a pretty good impression of the Commonwealth. How will Michonne and the others respond to this? And could this sour the potential trip to Alexandria? Because you know that Rick Grimes wouldn’t stand for this.

Hopefully we find out next time..