After the revelation from last issue concerning Michonne’s daughter, Kirkman follows up in this issue with a heartwarming reunion as the survivors head into the Commonwealth. Let’s jump into issue #176. 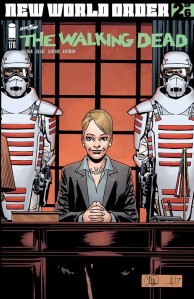 What I like about this issue is that while the prevailing thought at the front of my mind was learning more about Michonne’s daughter, we also learn more about and meet other members of the Commonwealth. After all, this was the original plan starting from Eugene’s radio conversations with Stephanie. That Michonne’s daughter lives here is a one in a million odds, but not impossible.

But this being as important as it is for Michonne, it makes sense that this would become the priority. At least, for her. Even if it turns out that her daughter wasn’t here, it’s some semblance of hope for her, probably the most hope any character has had in this series for a long time.  Anyone would demand to see their loved one even on the smallest chance that they might be alive.

Lance, for some reason, downplays it, which is odd because I figure he would know if Elodie is indeed alive. At the same time, he does quickly acquiesce and continue taking everyone to the Commonwealth.

And it’s inside the community where we get our first, albeit brief introduction to Stephanie. It’s quick, but enough to establish that there’s a hierarchy at work here and she stepped out of line with her unauthorized radio usage, according to Lance. Seems she’s not the one who is supposed to build trust, so like Eugene had done in Alexandria, Stephanie spoke to someone else without seeking permission.

We meet some other members of the community and it feels similar to when Douglas questioned Rick and the others when they arrived in Alexandria. In this instance, though, Mr. Maxwell Hawkins asking about everyone’s professions proves important. It’s Michonne’s background as a lawyer that allows her to meet the woman on the cover of this issue: Pamela Milton, Governor of the Commonwealth.

Huh, this place also has a Governor. Imagine that.

Before focusing on this conversation, it’s worth noting that some of the returning soldiers mention a man by the name of Mercer. I assume he’s the man who either trained them or is some sort of high-level ranking authority in the Commonwealth. Hopefully we get to meet him. 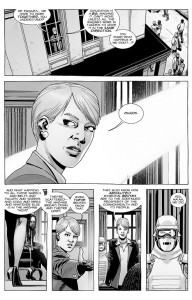 But onto the meat of the issue. Pamela really feels like a seasoned leader here and someone who understands the risks and responsibilities of leading a community of 50,000 people. She’s not antagonizing or patronizing to Michonne. In fact, just as Michonne sizes her up, Pamela understands right off the bat that Michonne is an engine, not a cog.

Pamela separates people into leaders and followers, saying that civilization is a machine. Without law and order, there would be chaos. That said, she doesn’t feel like a disciplinarian at all, just a person who gets that being in charge is a huge task. To her, the Commonwealth rising from the ashes of a ruined society is a sign that the world can return to order.

Now, Kirkman could’ve spent the bulk of the issue here, and I would’ve been fine with learning more about Pamela. But I like that when Michonne breaks and demands to see her daughter, Pamela, a mother herself, immediately softens and personally takes Michonne to the bakery where Elodie works. This shows that Pamela isn’t, as far as I can tell, a hard-ass.

After all, she easily could’ve just kept Michonne there. She is a stranger to the community, after all, and Pamela could’ve feigned ignorance or claimed that Elodie was dead. But she doesn’t try to deceive Michonne or dance around the issue. She just stops what she’s doing in order to help Michonne. 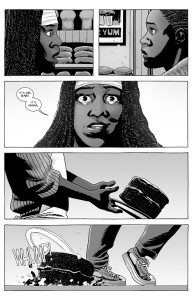 And it’s at the bakery where we indeed get the reunion between Michonne and her daughter. 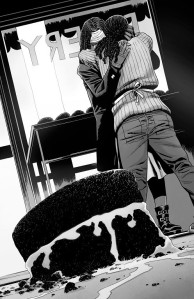 Think about this. The world has gone to hell, you’re separated from your loved ones, but join a new family in the meantime. Not that you’ve given up, but moved on with living in this new world. To learn that there might even be a one percent chance that someone in your family is alive and looking for you might be a reach, but could provide enough hope that you start looking for them.

Again, the odds of this are slim. What are the actual chances that not only someone in Michonne’s family was alive, but never gave up looking for her? Now sure, we don’t know if Elodie gave up and just moved on, but that photo represents how she never stopped hoping that her mother was alive. It’s not entirely impossible for the lost to become found again, even well after people have stopped searching.

I say this all to say that Michonne reuniting with her daughter is a very heartwarming moment worthy of a series where characters face so much loss. Sure, Michonne has family and friends in Alexandria, but here is her actual flesh and blood. No amount of new friends can replace that, even though you’ve got characters like Carl and Sophia seeing women like Andrea and Maggie, respectively, as their mothers.

So now that Michonne has reunited with her daughter, what I would expect going forward is that we learn more about the Commonwealth from Elodie’s perspective. Since she’s Michonne’s daughter, obviously I’d expect Michonne to side with her versus someone like Lance or Pamela, even though right now they haven’t given Michonne a reason to distrust them.

Though issue #169 was a fast read, the introduction of Pamela Milton helped us learn more about the Commonwealth. And the reunion between Michonne and her daughter was a great moment and fantastic way to end the chapter.