The episode begins in the darkness as a bound Rick stews inside his trash cell, which is soon opened as he’s summoned outside.  He tells Jadis that his offer still stands: join or die.  But Jadis just snaps some pictures of Rick instead, which are for after.  And with that, Rick’s cell is shut again.

Furthermore, the Sanctuary is all over.  Food and water is low, the workers are angry, the Saviors are angry, and soon enough, the Sanctuary will fall.  To be on the winning side, all Eugene has to do is wait and let this play out if he’s capable of doing that.  And Eugene has seen what happens and heard the screams.  Eugene knows this isn’t perfect, but they are Saviors and their job is to save.

Again, Eugene tells Dwight that his cloak and dagger are on the QT, but also hopes that Dwight’s actions don’t bring harm to anyone else in the Sanctuary.

Eugene then meets up with Laura as the two stare at the walkers outside. It’d be an understatement to state that the walker situation isn’t getting an better.

Then Carson calls him to take a look at Gabriel.  He’s stabilized, but Carson needs some medicine.  Eugene says that Gabriel brought his situation on himself.  As Carson prepares to head to the marketplace for some goods, he tells Eugene to stay, given that he knows Gabriel. Though Eugene would rather not, he ends up staying anyway.

Gabriel then weakly tells Eugene to sit next to him and again asks if he’ll help him get Carson out of the Sanctuary, even though the building is surrounded.  He wants Eugene to do the right thing, though Eugene isn’t sure what that means.  Gabriel says that it requires faith and trusting yourself, believing that God is inside of you, guiding you, and knowing that he has a plan for everyone.

Sounds absurd, but hey, Eugene is a man of science.  When the time comes, Eugene will know what to do. Eugene then eyes the paint on his finger. 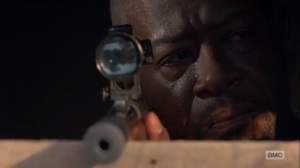 Morgan scopes out the Sanctuary from afar while listening to radio transmissions from the Saviors.  He then spots the garbage truck that Daryl’s driving. 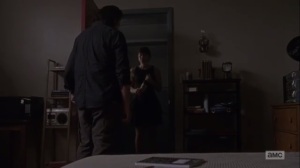 Tanya pays Eugene a visit for her radio, but he hasn’t finished fixing it yet. She gives him until tomorrow, but Eugene still wants the bottle of wine offered.  Tanya tells him that he could’ve changed the Sanctuary when she last came to him, but he only cared for himself.  Then Laura enters to tell Eugene that Negan wants him. 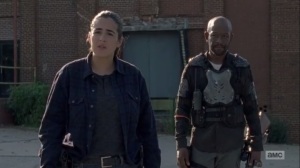 The foursome of Daryl, Rosita, Tara, and Michonne scope out the Sanctuary and make a plan to crash the truck into the Sanctuary.  It’s risky and the Saviors could see the trucks coming, and then Morgan joins them that there are other snipers who will cover the four if the Saviors see them coming.  Rosita would rather wait, but Tara wants to do something now, given that she missed her chance to get the weapons at Oceanside.

However, Rosita decides to sit this one out.  She used to believe in going in, but now believes in Rick Grimes.  But she wishes that it didn’t take Sasha walking out of that coffin to realize that. 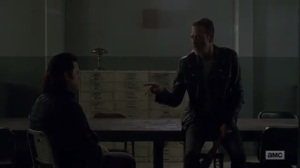 Negan tells Eugene that if things aren’t fixed soon, people will die.  But not Negan, he’s too good at this.  He doesn’t want to see people shot, bitten, or killed.  Plus, he knows that Eugene is strong.  He want to make sure that Eugene is aware of that.  Negan brings Eugene to his feet and shakes his hand, as that’s a sign of mutual respect.  Not many people get that from Negan.  Eugene then heads off to get work done.

And maybe to think about the fact that he almost kissed Negan’s hand.

He gets to work before he pulls out a particular part of what he’s repairing.  He then explores a basement and happens upon the coffin that housed Sasha.  He opens the coffin and pulls out the iPod Sasha used. 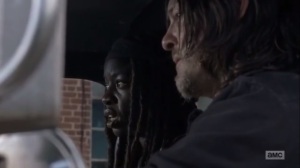 So Daryl tells her that she shouldn’t.  With that, she exits the truck and heads off.  But hey, Tara is confident that they’ll be fine.  After all, they’ve got Morgan covering them. 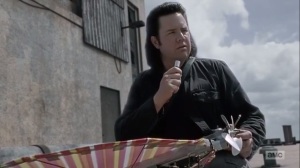 Outside, Eugene has his recorder prepared as he works on his audio glider, which is a kite with the iPod fashioned to it.  And he’s certain this will be successful.  So someone at the Sanctuary is a fan of kites.

While Tara, Daryl, and Morgan take their positions, Dwight surprises Eugene and tells him to back away from his device.  Eugene’s defense is that he’s saving other people, though Dwight is confident that Negan will kill the others anyway.  He admits that he’s working with Rick and the others to get rid of just Negan.  Eugene could take the chance and get rid of the walkers or get shot in the head.

He plays the music and sends the kite flying- Dwight can’t bring himself to shoot, so he shoots the kite instead. 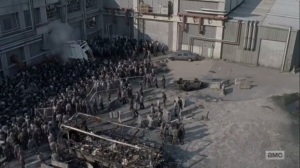 Eugene retreats and angrily tells Gabriel that he won’t help him.  He will make sure that Carson remains at the Sanctuary because he will survive. 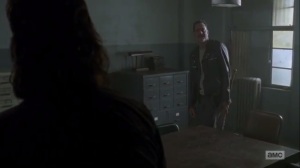 He then heads to Negan, who is ready to dump a huge shit storm on Rick in retaliation for this. Negan asks how Eugene feels to be the second most important person at the Sanctuary and to save so many people.  But Eugene has something else for Negan. 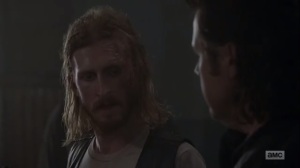 Before he can reveal it, in enter other Savior lieutenants, Dwight included, who arrive just in time to hear Eugene’s big plan: he can fix the intercom system which would improve communications. 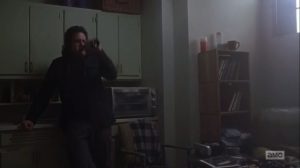 Later, Eugene waits in his room as he hears the gunfire from the ongoing firefight against the walkers.  He then drinks some wine.

Rick is again brought out of his cell to face a walker, but he fights off the Junkyard Gang and pulls the head off of the walker.  He begins to choke Jadis and tells the members that he’s leaving.  He promises that he’ll attack someday.  Regardless of what he’s endured, he’s still leaving.  After that, he tells the Junkyard Crew to run.  Jadis instructs her followers to back down. 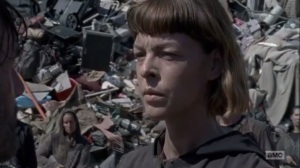 She then vows to help.  As for the Sanctuary, Rick wants Jadis to join her there and they’ll ask the Savior lieutenants to surrender.  Then Rick and Rick alone will kill Negan.  After Jadis’ terms, she’ll agree.  Rick wants his boots and clothes first, though.

Soon enough, the Junkyard Gang brings Rick to a spot in the road where he finds walkers feeding on the remains of someone hanging from the ladder.  He tries radioing to anyone who can hear him, but gets no response.

But when Rick looks through the sniper scope at the Sanctuary, he finds it completely bereft of walkers.

For an episode that’s leading into the mid-season finale, this felt pretty underwhelming. Not bad, but not all that memorable, especially compared to the last recent episode where we spent a good amount of time at the Sanctuary. 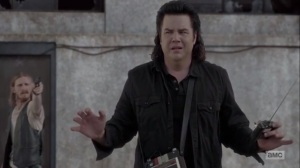 We seem to be at a standstill with Eugene.  Josh McDermitt is good with the material he’s given, showing Eugene’s mounting frustration at the situation, but at the same time, his character is at a standstill.  He’s showing loyalty to Negan and making a lot of inroads with the Saviors.  He appears to have converted, and yet we see him refuse to sell out Dwight, opting to keep his double-agent status a secret.

So Eugene is in this wishy-washy, will he won’t he state where his loyalties are blurred.  He’s not ratting out Dwight, even though he probably would have had the Savior lieutenants not entered the room.  He’s playing along, but not fully leaning one way or the other.  That’s a bit frustrating because while there could be some interesting things done with this, it just feels like Eugene is stuck.

However, it’s nice to see him coming up with ideas and putting his knowledge to use instead of just drinking and waiting for the inevitable.  The idea of luring the walkers away with the iPod on the kite seemed pretty interesting and had Dwight not interfered, I would like to have seen that plan play out. 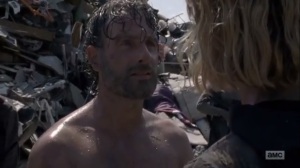 So it seems that Rick didn’t have much of a plan when he went to visit Jadis.  Again, wouldn’t want to put anyone else in danger, but going at it alone was risky, if not stupid. And he once again had to negotiate with Jadis…while in his underwear.  Sure, it was cool to see him use that walker to fight off the rest of the Junkyard folks, but this is Rick. There was never a chance he’d be in any real danger.

But now that he sees that the walkers are gone, chances are he may be ticked off at Daryl for messing with the plan.

Speaking of, I feel that Daryl’s plan is going to get someone killed.  Obviously it didn’t this time since Rosita and Michonne decided to bail.  Never did I expect Rosita of all people to be the voice of reason, but hey, her previous actions against Negan got Olivia killed.  She’s learning not to just jump into a situation because she thinks she can win. Good on her, even though this mission ultimately didn’t require either her or Michonne.

Daryl, though, even he and Tara succeeded in opening up the Sanctuary, I feel that this is somehow going to backfire on them down the line.  Not to mention Tara’s confidence. Yes, Morgan had your back, but who knows?  He could’ve walked away and gone to Fear the Walking Dead ahead of schedule and you’d be out of luck.  Now I know that’s not the case, but a plan like this won’t be without its repercussions.

And with the first half of the season coming to a close soon, with the ongoing war and Saviors certain to retaliate against the other communities, we’ll see what those repercussions are.  While “Time for After” wasn’t a bad episode, it was pretty sluggish at times and didn’t have the momentum one would expect as we head into the mid-season finale.