So about that hole on Andrea’s neck… 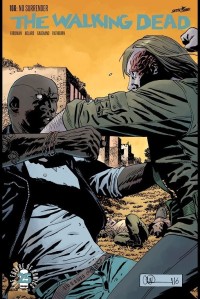 So Kirkman left us at a cliffhanger last time on two fronts: Sherry and the Saviors confronting Dwight and the survivors, and the mark on Andrea’s neck.  While I wanted to hold out a bit of hope that it might have been a gunshot wound, I was wrong. 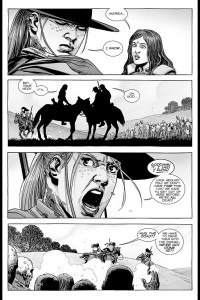 But even if it turned out to be a bite mark after all and it happened off-panel, Andrea isn’t bogged down by it.  Everyone has reason to be concerned, but there are bigger concerns to deal with between the walker herd and the Saviors.  So my hope is that even though her life is on the clock, Andrea goes out fighting.  Based on how this issue ends and looking at the cover for the next one, that may not be the case, but we’ll get to that. 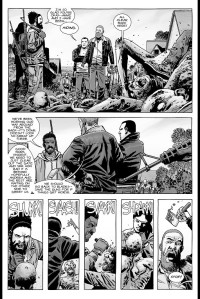 In Alexandria, we’ve got the survivors further thinning out the herd to the point that the people can come out of their shelters- or as Negan says in regards to Siddiq, hiding– and reunite.  For as big as the herd seemed to be when it stormed Alexandria, the survivors have done a good job diverting and conquering if they’re able to walk in the open so soon. 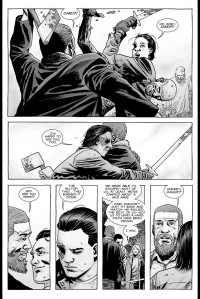 And in the middle of it, we get a Carl and Rick reunion, which is nice as Rick now learns how his son has been leading some of the Hilltop residents in battle.  More than that, I like how Rick immediately wonders where Maggie is, especially given the Hilltop’s fall.  Sure, Carl is good at leading, but losing Maggie would a huge setback for everyone, so of course Rick is going to be concerned for her. 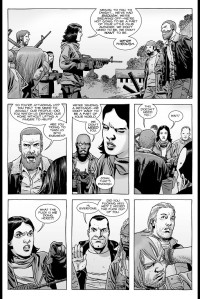 Then the Saviors show up at Alexandria and we get a standoff.  This is where we get to see just how much pull Rick has or believes he has when it comes to diffusing an explosive situation.  While Dwight has every reason in the world to want Sherry dead, and judging from the tear in his eye, we see how much it would hurt him to kill her, Rick still wants to play negotiator.

If there’s one thing I wish we got more of before the talks, though, it’s everyone reacting to Negan being out and helping Rick.  Sure, we get Sherry’s reaction, but you’ve got Carl and everyone else being nonchalant, as far as I can tell, to the fact that Negan is out of his cell and allying with Rick.  And Maggie isn’t here, so we don’t see her reacting to this, but I thought we’d get one survivor at least surprised to see Negan free again. 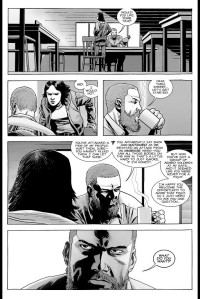 But then we get to the meat of this issue.  The bulk of this read centers around Rick and Sherry trying to come to a mutual understanding.  Well, Rick wants an understanding while Sherry is hostile from start to finish.  And we’ve seen Rick lose his shit before, so I’m surprised that he’s so patient here.  But then, he acknowledged that the Saviors hadn’t killed anyone, so maybe no need to lash out at Sherry just yet. 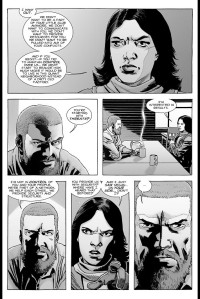 So Sherry and the Saviors don’t want to work with Rick anymore.  Okay, that’s not really an issue, but as Rick says, he’s not in charge of them.  Alexandria, the Kingdom, the Sanctuary, the Hilltop, Oceanside- these communities all work together.  We’ve seen many people defer to Rick’s leadership, but it’s not like he’s making these people bend to his will.

In addition, the Saviors haven’t been keeping up their end of the bargain, anyway.  Under Dwight, maybe, but with Sherry leading the group, the Saviors have just sat back and watched events unfold without lifting a finger to help.  They can opt whenever they want and the fact that Sherry still came to tell this to Rick in person shows that the Saviors at least want to make their terms known.

After all, if they wanted out, they could just stop lifting a finger altogether and ignore any requests from the other communities.  Also, the Saviors aren’t in much of a position to make threats.  Now I don’t know how many Saviors are left, but for Sherry to threaten to take over Alexandria, she’d damn well better have a ready army.  And even if she did, the Saviors would still be taking on the other communities as well as Alexandria. 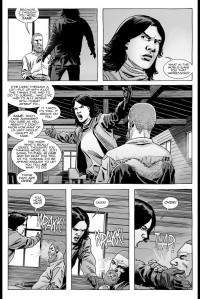 Maybe Sherry knows this and she’s just making an insane ploy that she knows could fail. She talks of her rough life, how it’s taken a toll on her, and saying that there are no sane people left in the world.  Perhaps she’s right.  In her mind, maybe the Saviors have no reason to cooperate with Rick.  They could go back to the way they lived under Negan and be a threat again to other communities foolish and suicidal as that sounds.

But after submitting herself to Negan, Sherry sees no goal in serving Rick, even though, as he states, he’s not trying to control her.  Dwight and Negan chose to help Rick by choice, but the Saviors have rebuffed most offers of cooperation between them and the other groups.  And not like the Saviors have ever been afraid of Rick.  Despite Negan not leading them, the Saviors’ demeanor seems no different than when we first met them. 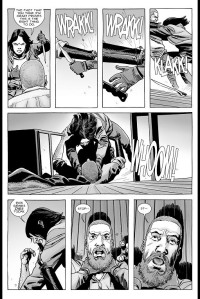 As I said, there’s still that hostility factor, and it’s cranked up to 11 when Sherry starts slapping Rick.  She says that Rick calling her crazy justifies this, but we know that she’s been planning all along to try and take over Alexandria.  Killing Rick would just be icing on the cake.  And it’s on this page here that we’re just waiting for Rick to strike back so we’re not left looking at his face as he’s getting the life choked out of him. 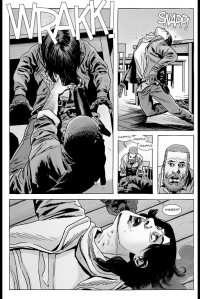 And then she dies.  I don’t think Rick meant for this to happen.  Looks like an accident. But still, how hard did Sherry’s neck hit that table?  Rick would have to have thrown her off of him and it doesn’t look like he put that much force into it.  Still, Sherry is now one less headache for Rick and the Saviors will no doubt have to hold tryouts for a new leader.  I’m still curious how the Saviors will factor into the story and where they go from here. 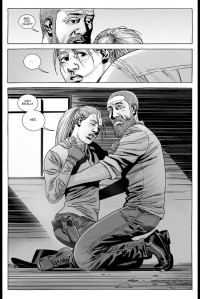 Oh, but Rick’s unfortunate day isn’t over yet.  That’s when Andrea comes in and it does indeed appear to be a bite mark after all.  She’s sweating and stumbling, both signs of being bitten.  So now it’s just a matter of time before Andrea leaves us.  But still, “No Surrender” was a good read that broke down negotiations between Rick and the Saviors.

I still hope that we get some kind of reaction from the others when they see Negan free, but that may come once Maggie comes face-to-face with Negan again.