The Whisperer War arc is over.  But the fighting is far from done… 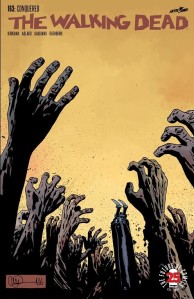 The long-lasting effects of the Whisperers and their massive herd are still being felt with the massive heard unleashed on the Alexandria Safe Zone residents.  Beta and the remaining Whisperers don’t even need to engage Rick and company right now.  The roamer herd will do the work for them. 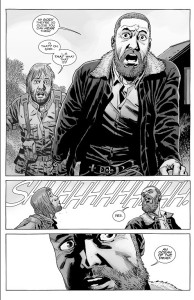 There’s no time to breathe or blink in this issue.  Right from the start, Rick and gang are mounting an offensive to stop this oncoming rush of the dead.  That by itself is an uphill task, and this herd eclipses what the residents had to deal with back in “No Way Out.” There, the numbers were huge, sure, the survivors could contain and gradually thin out the swarm of roamers.  Not so much here. 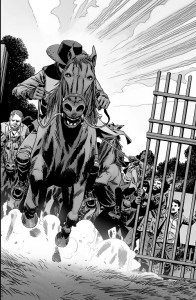 So of course we’re gonna be concerned about anyone going out to try and take this threat head-on, but I love the fact that Andrea, Eugene, Dwight, Michonne, and Jesus- did I miss anyone?- are going to the herd to try and split it apart.

It’s not a bad idea in theory, but in execution, even though it’s the best this group can offer right now.  And this squad does figure out early on that there’s almost no way to lead this many roamers away from Alexandria, especially when the herd is headed in a straight line.  It would take precious time that this group doesn’t have when the herd is already within striking distance of Alexandria.

With that in mind, I like the idea of divide and conquer.  Every little bit lessens the impact the herd will have on the Safe Zone, and if anything, this lets Michonne and Jesus be the badasses we know them for as they get to work cutting down a few roamers at a time. 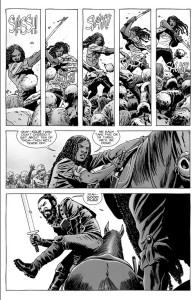 It hacks away at the herd even further and gives this group an opportunity to eliminate some of the roamers instead of just leading them away.  I’m still concerned for this group, though.  Eugene was exhausted last time, but he tells Rick that he’s ready for this battle. And I’m hoping the energy Michonne and Jesus are exerting while cutting down roamers doesn’t inhibit their ability to escape.

Now let’s get to the Safe Zone itself.  There’s some great tension and fantastic imagery here.  Between Cliff Rathburn, Stefano Gaudiano, Charlie Adlard, we get some good visuals of the herd pressing towards Alexandria.  It’s much more claustrophobic, I feel, than the herd in “No Way Out” just due the size and volume of the herd ready to break down the gates.

But Alexandria has defenses to keep the roamers at bay, and while it’s good that Alexandria has spikes to impale roamers, I wish the residents here took a page from the Saviors.  Remember, roamers are kept in place in traps right outside the Sanctuary, and that particular scent of the dead keeps away other roamers. 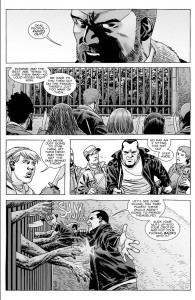 Enough about that, though.  Let’s talk about Negan and his rallying call.  Here’s a guy who has brought terror to the Alexandrian residents, but now, after proving to Rick that he wants to change and going as far as killing Alpha, there’s no fucking way Negan will sit out a battle.  I wager they would have rallied behind Rick and stabbed the walkers anyway, but Negan gave them that extra push.

And the look on Rick’s face right he implores the residents to “Listen to the man” is beautiful.  Thinking back on what these two have been through and done to each other, it’s a new development for them.  Even if Rick hates Negan for what he’s done, he did go to Negan for advice on convincing the residents to crush the Whisperers, and Negan had many opportunities to screw over Rick and leave, but he hasn’t.

Perhaps he’s changed.  Maybe he could turn over a new leaf.  As much as we want to hate Negan for what he’s done, the man has shown that he has a calmer side, as we saw with how he treats his wives, apologizing to Carl after making him cry, or how he bonded with Alpha…before he killed her, anyway.  Point is, in this one moment, Negan, not Rick is the one who led the charge.  And rather than shirk away, the people listened.

Obviously it wasn’t enough, but it was one of two things I didn’t think I’d see from Negan. The second came from Negan rescuing Rick.  Again, he saved Rick.  This is the same guy who is responsible for breaking Rick’s leg in the first place and now he’s goddamn saving his life.  That is just great.  And I love how in-character it is, as Negan still says “You’re a hard fucking man to please, Rick Grimes.”

And watching this all from the outside are the Saviors, who are still in wait to pick up the pieces once the herd is done with Alexandria.  What I wonder is how long the Saviors will keep up this stand.  I’m sure Sherry is a competent leader, but she’s not Negan.  And do the Saviors want to risk losing more of their numbers by escalating another battle between them and the other communities?

That’s not to say the Saviors, like the remaining Whisperers, couldn’t just slip into the background and reappear at an inconvenient time for the survivors.  Hell, the reason the Saviors aren’t striking out at Rick now is because they’re letting the Whisperers wear him down.  Whether they’ll have a similar impact to when they were led by Negan, we shall see. 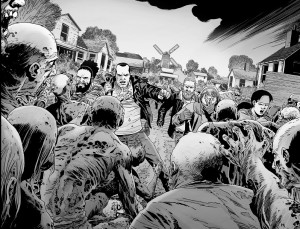 “Conquered” was a good read and over pretty quickly, now that I think about it.  But it was a fun one nonetheless and with the herd breaking into Alexandria, Rick’s group is now separated from Andrea’s as they continue to combat the sea of roamers.  Negan stepping up and not just helping, but saving Negan’s life was a surprise, but after all he’s done to prove he’s changed, it felt earned.

And now, these two enemies have no choice but to join together and deal with a mutual threat.  Complimented by some great artwork, issue #163 was an enjoyable issue.  And hey, for only 25 cents this time around, you can’t go wrong with this one.