So we are indeed headed to war with the aptly named “The Whisperer War.” 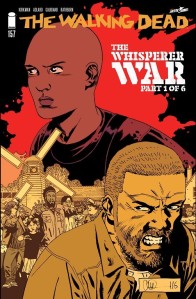 Right off the bat, I’ll say that this was a fun read.  It once again managed to balance multiple storylines and give us just enough of different locations without making the issue feel stuffed.  And the meatier parts, namely Negan’s talk with Rick and Andrea, held more weight because Negan will likely play a key role in this war.

But we’ll get to that in a bit.  I’ll start off with the Whisperers themselves since we get a snippet of what they’re doing in light of Alpha’s death.  Despite losing Alpha, Beta remains fiercely loyal to her, which I like because it would have been easy for him to step into that leadership role.  But no.  He shuts down any possibility of someone taking Alpha’s spot and rejects the notion that Negan was ever one of them.

So more than ever, Beta has motivation to retaliate not just against Negan, but all of the survivor communities.  We know that he has the roamer army to do so and the Whisperers have already shown how they can blend in, so an attack is inevitable.  And like Alpha, it’s a nice change of pace to see the Whisperers grieve and show emotion.  At the same time, they still don’t show much to keep up appearances.

Meanwhile, we get a brief moment of friendship between Dwight and Magna, which I like because it helps develop Dwight’s character since his turn to the allies and it gives Magna something to do since she and her team still haven’t been featured all that much.

I also liked Dwight’s immediate reaction to Negan approaching him.  Don’t even give the guy a chance to talk- just shoot on sight like he’s a roamer.  Nice moment of levity right there, followed by his dripping gift for Rick.

And despite all the terrible things that he’s done, Negan makes a damn convincing case to Rick and Andrea.  Has the man changed for the better?  It’s better for Rick to assume not, but at the same time, Negan has had now two opportunities to break free or strike back at the survivors.  He stayed in his cell when it had been left open for a bit.  He didn’t take charge of the Whisperers to lead a revolt against Alexandria and other communities.

Even if Rick and Andrea may hate Negan, he’s shown that he deserves the smallest bit of trust because, hell, he literally gave Rick the head of the Whisperers.  And given what Alpha did, you couldn’t ask for a better present.  So maybe Negan is biding his time to rise again or he does now believe there’s a better way to survive than how he lead the Saviors.

I don’t think Rick has any choice but to trust Negan at this point.  It wouldn’t be like him to have Alpha’s head delivered to him by Negan, and then just throw him back in jail without a thought.  This is the same man who sought out Negan’s advice for how to lead his people.

So even if it’s minimal, I believe that Rick is slowly changing his tune towards Negan. He offers Negan the bare minimum to survive and promises that he won’t lead another group, so Negan won’t have much when this is all over, but it’s better than nothing and preferable than a jail cell.

Whether Negan stays on his best behavior, we’ll see later, but I find it fitting that Rick would assign Dwight to watch Negan.  Not just because of their past during Negan’s reign, but this shows Rick’s trust in Dwight, as well as how much Dwight has changed since his time with the Saviors.  I think he may hate Negan more than Rick, and he has every reason to, but for Rick, he’s willing to put that aside to keep watch.

This is the same man who, under Negan’s orders, took part in attacking the survivors, but years later, he’s proven himself reliable and trustworthy…now that I think about it, this is exactly like Negan’s situation right now.  Huh.  Suppose this ends up being the case: Negan has already delivered Alpha’s head, but he could go further and be a key asset in the war against the Whisperers, thus setting him up to be a true ally to Rick.

Hey, it worked for Dwight.  Anything is possible. 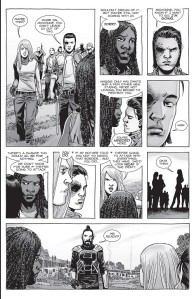 Keep an eye on the Hilltop, by the way, because while they’re gearing up to help out with the impending war, Maggie tells Michonne that she can’t give up more people.  So I’m wondering if this means that the Hilltop’s defenses are weak right now.

Maggie isn’t stupid enough to give away her best or all she has, but the fact that she says she can’t give up more makes me wonder if the Hilltop could have saved those men to defend the community.  But even then, she’s still got Carl, who is more than ready to fight, even Michonne won’t let him come with her.  There’s also Lydia, who has lived among the Whisperers, so she can probably provide intel for Maggie in case the Hilltop is attacked.

We haven’t spent a lot of time at the Kingdom since the time skip, but we get enough here to see that there’s some inner conflict and how some residents haven’t warmed up to Michonne.  It makes me wonder whether the Kingdom will defect or decide to stay on the sidelines during this war.  Since Ezekiel’s death, they still seem to be in disarray, so now we’ll hopefully see how they factor into the Whisperer war. 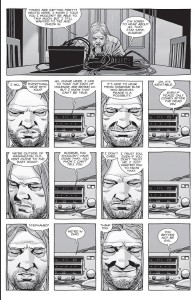 Then you’ve got Eugene still talking on the radio to Stephanie and giving away his location. Could be problematic.  Could be even more problematic if Stephanie is lying about where she’s based.  There’s no indication that she is, mind you, though it doesn’t hurt to be cautious all the same, like Rick and Daryl initially did with Jesus on “The Next World” from Season Six, when they at first said they didn’t have a camp. 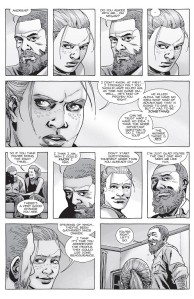 Back to Rick and Andrea, who are taking a backseat approach with this war.  Well, more so Rick than Andrea since she’s still an excellent sniper.  To be honest, Rick has earned this.  Not just with his injury from Negan, but he’s given orders and been on the front lines so many times that he should dial it back for once.

And even though he’s second guessing himself, he’s always got Andrea to snap him back to reality.  But even still, the two of them realize that they need to be extra cautious about Negan.  He’s proven he can be reliable at times, but they know Negan too well to just accept him with open arms.  But like Andrea said, she may not know if she can trust Negan, but she can at least trust Rick. 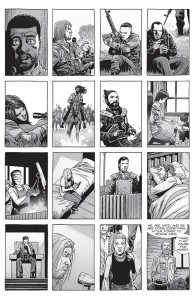 But with the war coming, this issue was the calm before the storm.  That final panel of the various communities, coupled with Rick telling the people at Alexandria that there is no cause for worry goes against Gabriel spotting that approaching herd of roamers and possibly Whisperers.  And that could just be the start.  Either way, get ready, because we’re headed to war.  Great issue.

Also, keep an eye on Aaron and Jesus.  Something may be brewing there…