After making the tiniest bit of progress during “Congressional Ball,” Selina Meyer decides to take her family away to Camp David for some relaxation and to escape the busy world of politics.  Just ignore the Chinese delegation to your right. 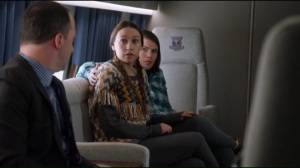 The episode begins two days before the New Hampshire special election.  Selina is raging at Amy and Dan due to Jonah’s poor debate performance.  This, in turn, hands New Hampshire to O’Brien, but now, Selina can spend time with her family…and Gary.  Catherine is just happy her family can get to know fun Marjorie.

The group arrives at Camp David, while Selina tells Gary about her meeting with the Chinese, who, who want complete secrecy.  So Gary is tasked with keeping the rest of the Meyer clan away. 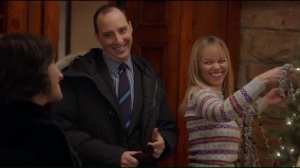 Inside, Monica is decorating the Christmas tree with some popcorn ornaments.  Catherine tells Selina that Marjorie is a raw vegan, and she’s turned Catherine into one as such.  Andrew thought Marjorie was Selina.  Easy mistake.  Also, in light of the estate, Catherine is unsure how to spend the money.  Andrew wants her to sell, but Selina wants no talk of money.

Ben and Kent tell Selina that the Chinese are en route.  In exchange for lifting sanctions, a plant will be built in Ohio and another in North Carolina, which would go for Selina.  Mike has a press release ready.  Oh, and Sue tells Selina that not only will the Chinese be coming to Camp David, but Minna Häkkinen as well.  Indeed, the Finland Prime Minister does arrive.

While the Ryan campaign deals with flailing numbers, Selina and Minna talk the Chinese deal.  Minna tells Selina that, during negotiations, she needs to stand her ground also bang the table, which Selina never does.

The Chinese soon arrive and Minna introduces them to Selina, all while Gary tries to whisper facts.  The Chinese present a photo of a sad piglet, which apparently looks like Catherine, but the gifts don’t stop.  The Chinese also present silk and a tapestry, which is a symbol of royalty.

Selina, in turn, only has one gift: a geode that represents the solid foundation between the two countries.  It also sparkles.  Gary then arrives with another gift: two bottles of wine.  The wine is at least an acceptable present.  Unfortunately, the President of China does not drink.  But wait, Selina has a final gift: Catherine’s goddamn pen.  This the Chinese accept.

Selina is upset that the Chinese out-gifted her.  There’s more bad news, sort of, when Dan reports that Jonah literally shot himself in the foot, which is actually hilarious.  He’s is in critical condition.

The President of China requests a nature walk, and though Selina doesn’t want it, she starts walking the Chinese delegation around the camp.  Mike asks one member from the Chinese team for a piece of gum.  He’s presented with…something and ingests it.  His phone thanks the man in Spanish.

That evening, the family plays Monopoly when Gary and Selina arrive.  Catherine thinks that Gary has Marjorie’s gift, which ends up being the silk from the Chinese.  That silk is apparently government property.  This might also be the most emotion Marjorie has ever shown yet.

The next morning, Amy pops by in some very conservative looking pajamas to tell Dan that the NRA has issued an attack ad on Judy Sherman.  Dan then spots an NRA poster outside.  It’s a Christmas miracle.

Back at Camp David, Mina interrupts Selina’s meeting, which is apparently about Kuwait and not New Hampshire.

Minna leaves to take the Chinese for a walk when they spot Catherine and Marjorie, wearing the silk, kissing.  However, because Marjorie’s back is to them, Minna and the Chinese think that it Catherine is kissing Selina.  Whoops.

So the Chinese change their terms and want the United States to hand over the islands.  They were offended by the incident with Selina’s daughter.  But hey, Selina had to let Catherine finish.  Because Selina and Minna don’t get specific, they don’t know what the other person means.  And Mike learns that he’s been chewing nicotine gum, which he continues to eat because why the hell not?

The Chinese and American meet to negotiate their terms.  Per Minna’s instruction, Selina declares this unacceptable and storms out when the spots Andrew talking with Catherine.  Andrew talks about his plans to destroy a Brazilian rainforest in order to start up a resort when Selina arrives and tells her daughter to talk to her about money concerns.

The Chinese economy is in a poor state.  If the United States lifts the sanctions, the Chinese might be prepared to discuss Tibet’s potential independence.  Selina would play a role in that, and this is some man-on-the-moon legacy shit.  Minna tries to explain some conditions because this deal just includes potential talks, but Selina is too ecstatic about Tibet.  Mike, by the way, gets the good news that the surrogate is pregnant with twins.

As the special election commences, Selina tries to tell Catherine about her good news, but Catherine only wants to talk with her father. 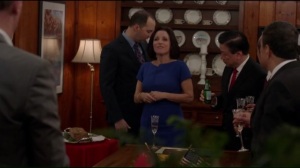 So the Chinese/American deal goes through at long last.  Selina presents the traditional Christmas meal: a freedom log.  The Chinese don’t want Selina to deliver a statement on a sensitive issue, though Selina wants the world to know her accomplishments. 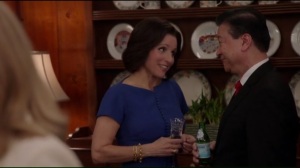 Oh, and the Chinese are aware that Selina lied about the Chinese hacking her servers, even though they really did.  They even have Selina’s emails to prove that she lied.  Selina wouldn’t want word about that to get out, would she?

Mike smokes up and learns from the Chinese that he’s going to have a Chinese baby due to the adoption papers going through.

Selina asks Andrew about his investments when Ben and Kent burst in to tell Selina that Judy Sherman has conceded.  As such, Jonah has won the race and will be voting for Selina, which would hand her the presidency.  Selina hangs up before Jonah can talk more about the issues.  As Amy and Dan realize that they just elected Jonah to Congress, Jonah calls out the various people who did not vote for him.

Jonah will be sworn in with the rest of the freshmen.  Catherine tells Selina that she’s keeping the beach house and turning it into a sanctuary for rescued farm animals.  Okay, sure.

I don’t want to say that “Camp David” feels like a filler episode because it isn’t.  It advances several plotlines that we’ve been getting throughout the season and continued to show Selina working hard on both the domestic and international front.  I can’t put my finger on why the episode feels a bit disjointed compared to others this season because I did still like it, but it felt a bit underwhelming.

Maybe that’s because it didn’t utilize everyone so much as just show them.  If this is a family affair, I’m not certain why Selina’s team had to come to Camp David, more so since they had almost nothing to do.  Almost.  It was fun to hear Ben air his grievances with the Chinese and I’m glad that Mike got a plethora of good news, but other than that, this episode didn’t need any of them.

Instead, let us spend more time with Selina’s family- and Gary- and see how they interact.  Hell, let this be an opportunity for Selina to operate without her entire team at her side.  Plus, they would just be a phone call away and if they needed to come up, then no problem.  My issue is I don’t think they needed to appear in this episode for as long as they did if they aren’t utilized as well as Veep uses its cast.

The same applies to the New Hampshire team.  First off, Jonah seems to have bounced back from his gaffe off-screen.  His victory seems to come not from the team, but from his own blunder.  So really, Amy didn’t even need to make the voyage to New Hampshire.  The team calls out Jonah on his shit, which is what anyone would do, but in hindsight, Amy didn’t bring much that Dan, Jeffrey, and Richard accomplish.

However, it’s going to be interesting to watch Jonah as a Congressman.  Granted, he’s still a placeholder, but his bump in the polls has come from him railing on Selina’s record.  Of course, he’s pledged to back her, but I wonder how the people of New Hampshire will react when the man they elected to Congress ends up supporting the very politician that he attacked.

As for the actual Camp David storyline, it says a lot about the quality of a character when Minna Häkkinen has only appeared three times and still makes every appearance memorable.  She’s the opposite of Selina: polite and diplomatic.  And she comes off as uncorrupted by the political process.  A great counter to the harsher, blunt Selina.

And even her advice ended up working in Selina’s favor.  It was funny that, despite the setbacks, being out-gifted, having to maneuver around Andrew to talk with Catherine, and trying to balance work with family that Selina got some semblance of a win.  She’s got Jonah in her pocket and is on the verge of helping foster independence in Tibet.  However, the Chinese also assume that she kissed her daughter, so you can’t win them all.

So really, like “Congressional Ball,” Selina comes out of this looking like a winner.  A wounded winner because she can’t escape a situation unscathed, but a winner nonetheless.  And don’t get me wrong.  My criticisms of this episode don’t take away from another funny episode.

Whether it’s Gary whispering to Selina as she’s trying to hear Minna, Selina scrambling to find a new gift, or Catherine and Marjorie’s continuing relationship, there was a lot to find funny this week.

Though it does leave me wondering who would be a better parent for Catherine.  I’m glad we followed up on her inheriting her grandmother’s estate, but she can’t even enjoy that.  It’s clear here that Andrew is willing to listen to Catherine, but he also wants her money.  Selina, by comparison, can never give Catherine the time of day, but at least wants to make sure she’s not being tempted. 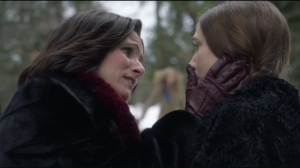 You know, scratch that.  Andrew and Selina are both bad parents.  Plus, Selina gave away the very gift that her daughter gave her.  And of course that pen ended up being the one gift that the Chinese loved.  Even at Camp David, Selina Meyer can’t catch a break.

But again, she scores a win by hopefully having a hand in Tibet.  And with Congressman-elect Jonah Ryan headed to the House of Representatives, she has the vote needed to secure her Presidency.  Despite the blunders, things are looking up for Selina.  So she must be headed for a misstep soon.