Sometimes, you just need a little task force in your life.  Just ask Selina Meyer as the still-sitting President of the United States engages with bankers, swats away her Vice President, and gets some good news from the team in Nevada.  Oh, and hi, Catherine. 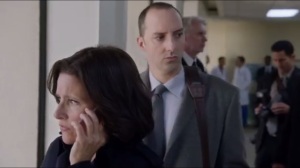 The episode begins in Carson City, Nevada, at the ungodly hour of 5:02 am.  Selina calls Amy and wants to know about removing Native American precincts- she’s having reservations about reservations.  How’s that for a cold open? 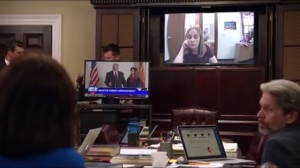 Later, at 6:43 am, as Amy, Dan, and Richard work with the election team in Nevada, the others convene at the White House to video call Amy.  At the same time, Senator O’Brien announces on the news that he’s tapped James Whitman to head up the recount team in Nevada.  Ben suggests his old mentor, Bob Bradley.

Sue enters to let Selina know that the Chinese hackers have breached White House employee files.  As for her docket today, Selina has a thank you meeting with campaign volunteers.  She wants Tom James to do it, but he already has his banking task force meeting.  Since that’s more alluring than anything she’ll be doing, Selina now wants dibs on that instead.  Tom won’t be happy about that. 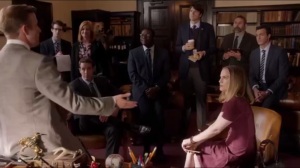 Back in Nevada, the campaign teams meet with the state’s Secretary of State, played by Matt Oberg, to go over the recount rules.  Following the meeting, an eager Richard tries to talk to the press when this is all over, but Amy and Dan whisk him away before he can say too much. 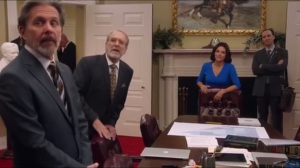 Selina meets with Bob Bradley, played by Martin Mull, and introduces him to the team in Nevada.  He suggests doubling the number of lawyers they have before going off to make a million phone calls.

Ben later speaks with Bob, who does remember Ben and the many nicknames folks used to call him when he was younger.  Also, Bob remembers Sue and how she’s still there.  Just how old is Sue?

While Team Meyer and O’Brien work with the recount folks, Cliff, Jonah, and Richard meet with voters whose mail-in ballots were disqualified because the signatures didn’t match the voter rolls.  They make no progress.  Jonah suggests doing things his way, and that also goes nowhere.  The only things that gets worse are Jonah’s feet due to his shoes.

Selina and Tom attend the Banking Task Force Meeting, though Tom knows that it’s a meaningless photo opportunity.  She sends him off to meet attend a volunteers’ brunch.

Selina then meets with the various CEOs, geniuses, and everyone else in room.  One in particular is Charlie Baird, played by John Slattery, who donated to both the Meyer and O’Brien campaigns. Selina didn’t like Baird talking about her financial acumen, but then, Baird’s friend, Katie Gross, and a past acquaintance of Selina, called Selina’s financials a lot of fakakta.

On behalf of Bob Bradley, Congressman Furlong arrives in Nevada to dazzle these so-called ‘armadillo fuckers’ with his political star power.  Furlong ends up being more of an asshole than anything else to the vote counters.  Amy and Dan don’t do much to help when he leaves.

Kent tries to confirm Sue’s age.  He gets nowhere.  Selina meets with some bronze Olympic medalists.  Also, Catherine out again.  Selina wants to do another Banking Task Force and is interested in Charlie Baird in particular, though Ben feels another Task Force isn’t necessary, especially if she’s on the verge of being reelected.  Or at least a discrete Task Force.  Selina is only human and just needs a little Task Force in her life. 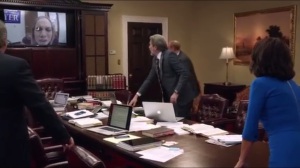 Amy calls in, but the connection sucks.  The team has 512 votes, so a full state recount is a go.  For once, Catherine is not around to record.  Selina wants Gary to bring in Charlie Baird. 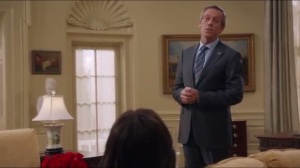 So Kent, Ben, and Selina decide upon surrogates for the Sunday talk shows.  Tom James arrives to explain that he gets why Selina is taking charge, but it’s a bit passive-aggressive.  However, he doesn’t want to be asked to be the United Nations ambassador because he still has some pride.  Ben thinks that Tom believes Selina will win Nevada.  And if Selina takes that to mean she’s going to win.

Selina meets with Charlie Baird again and takes him on a tour of the West Wing, even though there might not be time.  She shows him around, including the closet where Warren Harding apparently fathered a child with his teenage mistress.  She then takes him to see the residence.

In Nevada, Amy and Dan are quite pleased with their work and realize that their hotel rooms are right across from each other’s.  Amy is sharing a room with her sister, Sophie.

So after Baird and Selina finish Task Forcing, she needs him gone.  After all, she’s not that kind of a President.  Gary arrives as Baird makes small talk and gets to know him.  Selina asks Gary to take Baird to take him to the Southeast gate.

Later, Selina and Bob go over recount precincts and where to focus their priorities.  Bob leaves while mistakenly saying that he’s headed to Nebraska.  Then Selina learns that Senator O’Brien has tapped Charlie Beard for Treasury Secretary.  As the team watches the announcement, Catherine knocks over Mike’s bottle.

Selina confronts Charlie, who says that the offer was a preliminary meeting and scheduled before Baird even met Selina.  Plus, if Selina wins, the offer won’t matter.  Selina says that this thing between them is over, even though this wasn’t really a thing in the first place.

Mike then heads off to talk with the press to talk about the economy.  He takes a sip of water and tries to answer why Selina met with Charlie Baird, but since he can’t give a coherent answer, the buzz now is that Charlie Baird is fucking the President.

In Nevada, Amy and Dan talk at a bar before Amy heads off to her room.  Sophie then talks with Dan and tells him that she works at CVS.  Dan apparently would like to work there.  I think Dan misheard her, but let him figure it out.  She then asks if they want to get outta there.  After all, she’s got her own room.

The episode comes to a close with Baird facing a mob of journalists who are interested in the nature of his relationship with President Meyer.  Amy, meanwhile, repeatedly texts ‘Nightcap’ to Ben, who is in D.C.  He eventually responds.

If history is any indication, it’s that things can only go so well for Selina Meyer and company before they hit a brick wall and suffer a huge catastrophe too big to handle.  Not really the case this week. 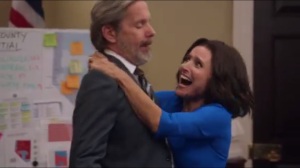 Right now, Selina is doing pretty well, all things considered.  The team is headed for a recount, Selina has kept Tom James on the ropes for now, and she even got her rocks off with Baird.  Sure, that last one is debatable of whether she’s doing well, but for the amount of stress she’s always going through, she got to take advantage of some free time. 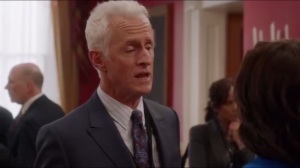 What we’ll find out later is how, if at all, this quick fuck with Charlie Baird will affect both her and O’Brien, since he tapped Baird.  John Slattery is fine in his initial appearance and I like how Baird can go toe-to-toe with Selina instead of folding under her profanity and temper.  Even in the face of a breakup, over a one-time fling, he doesn’t buckle.  Rarely does Selina face that kind of confidence from her own team, let alone a romantic interest.

Speaking of confidence, Tom James’ tone this episode was interesting.  Last season, he had no problem calling out the team on their shit.  Here, he accepts being replaced on the banking task force and bends to Selina’s will.  More than the possibility of Selina winning Nevada, I’m wondering what Tom knows.  He’s a smart guy who knew that he could eventually become President if the race tied.

Is he still thinking a few steps ahead of Selina and just trying to play along?  Given his past, I would not be surprised that he’s playing the long term game.  I will enjoy seeing how his relationship with Selina continues to develop throughout the season. 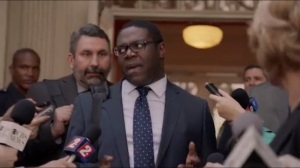 And though Selina’s team is still a bumbling mix of fools and jerks, they got the job done and will now get a recount, even if they were unconventional in their approach.  Richard’s willingness to help out, as well as his habit of speaking before thinking, has gotten him in trouble with Team Selina before, but on his own, he can’t get much done because he’s not as abrasive as Amy or Dan.  Maybe that’s because he’s actually a good person.

Though I did find the part about voter ballots being disqualified noteworthy, especially given how often in our own elections we hear talks of voter fraud, disenfranchisement, and a reminder that it’s less your ballot who counts and who does the counting.

But that’s getting off-topic.  For whatever reason, there are people who want to see Dan and Amy as an item.  I can’t imagine why, but I prefer them as competitive friends.  That and they’re both incredibly toxic.  But for a moment, there appeared to be a glimmer of hope for them until Sophie arrived and threw a wrench in a potential opportunity for more task forcing.

And if anything else, I’m waiting for the moment when Dan’s enthusiasm for Sophie’s job wanes.  I understand he’s in a bar and those tend to be loud, but how do you mix up CVS with CBS?  If Sophie worked at CBS, I think Amy would have mentioned it by now.  Hell, maybe she’d be handling communications on Selina’s team.

Because if there’s one thing that didn’t go well across most of the team, it was the communication.  Whether Catherine not telling Mike about spilling his master cleanse drink, Amy sending her late night texts to the wrong person, or Baird not informing Selina that O’Brien had tapped him, this episode had an ever-present failure to communicate. 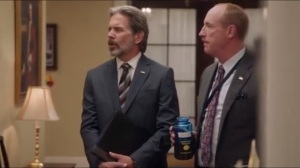 All the while, I do like the progression of several character’s storylines, like Mike trying to get fit for his future child, the Chinese hackers, and Kent’s ever-curious interest in Sue, who could potentially be the oldest person on the team or just doesn’t age at all.  And we’ve still got Catherine recording in the background, so count on this footage to be critical later. 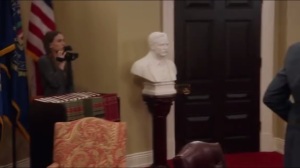 Minor thing, while I like Selina calling out Catherine at several points, I do wish that, at times, she was just hidden and in the background, like when we saw Ben talking to Bill Ericsson in the premiere.  But then, I missed her that first time, so who is to say I didn’t miss her again?  Either way, it’s a nice way to keep Catherine involved by giving her something that ties into her mother’s work.

And keep an eye on Gary.  As protective as he is of Selina, there was a noticeable shift in his demeanor when Baird started getting to know him as a person instead of a bag man.

“Nev-AD-a,” or however the hell they’re pronouncing this one, was a good episode for the team and Selina Meyer in general.  She got to get her rocks off with Baird, Nevada is poised to hold a recount, and she’s keeping Tom James at bay.  Of course, for Selina to be on such a high, she’s got to be headed for a low soon.