So after Rick’s call to arms, we have issue #151, titled…well, “Call to Arms.”  There’s a lot of nice character building in this issue that I enjoyed and overall, it was a good issue. 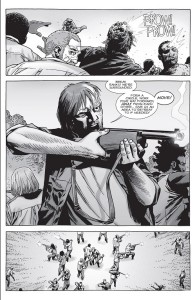 We build off of Rick rallying the communities by having them out in the wilderness, fending off roamers.  While I don’t necessarily think it was the best idea to be grouped together and fire their weapons since those sounds can draw in even more roamers, I like that we got to see the people training, rather than it all happen off-panel.

As we’ve seen both earlier in this comic and similar to what’s going on in the midst of the sixth season of The Walking Dead, Rick wants these unassuming, non-threatening people who don’t often see action to be prepared for when they take on The Whisperers.

But Rick has realized that all of his police training comes with a limit.  His style of training doesn’t mesh well when preparing for an army of people who dress in roamer skin.  And I doubt that Rick’s instructions would boil down to ‘Shoot to kill.’  That’s where Dwight comes in.  And I really like that, despite Dwight’s continuous objections, Rick sees leadership in him.  Again, Dwight took up the mantle when Negan was defeated, but he’s since had second thoughts.

The fact of the matter is that, in this charged atmosphere, he doesn’t get to just quit.  He’s already left The Saviors to avoid responsibility, but as Rick points out, he’s already a leader.  In my opinion, I think that even with Dwight’s reluctance, he may capitulate to Rick pushing him to lead because he values his opinion.  It’s an interesting way to force Dwight to grow.  He left to escape leadership and ran right into a scenario where his expertise proves valuable.  Here’s hoping he finally steps up to take charge.

As far as other characters go, we learn that Maggie is about to return to The Hilltop, while Jesus remains in Alexandria.  By the way, I love Jesus’ remark in response to Rick asking Maggie if she can spare more people, to which Jesus said that he’s staying, so how many more would Rick need.  It’s brief, but effective because it continues to show how much of a badass Jesus is, but also just how useful he is as an ally to Rick and Maggie.

We also finally get to spend a bit of time with Father Gabriel, who hasn’t had much to do since the time-skip.  Yeah, we’ve seen him here and there, but this is the most, if any, dialogue he’s had.  And it’s about him wanting to step up, which I like.  Gabriel isn’t a character we’d assume would normally be out killing roamers, but he did step up during “All Out War” and he realizes that it’s time he did more than just work to save people’s souls.  Good on him.

Now the most interesting part of this issue, to me, came from Rick’s conversation with Josh’s father.  Despite almost being killed, and even though Josh’s father wasn’t the one who did the attacking, Rick is taking a humane approach to dealing with people who do bad things.

He says “Doing a bad thing doesn’t make you a bad person.  If we wrote you off after that one mistake…think of all the good you’re going to do that would be erased.  Don’t you get it?  That’s what we’re doing.”

Take a close look at Rick’s face right after he says this.  It’s brief, but effective, as if Rick has just had an epiphany.  Following this, he goes to check on Negan, as if he intended to say something to him, but just left.  Negan embodies that person who has done a bad thing.  Not to say that Rick would suddenly forgive Negan for killing Glenn or for any of the horrible things he’s done, but consider that Rick went to Negan for advice on leadership.

Part of me thinks that maybe Rick is starting to see Negan as more than just a prisoner, but a valuable resource.  I won’t go as far as saying this is the first step in Rick considering the possibility of releasing Negan, but maybe he’s wondering if what he’s doing, keeping Negan imprisoned, goes against what he said to Josh’s father about undoing the good that Negan could do. 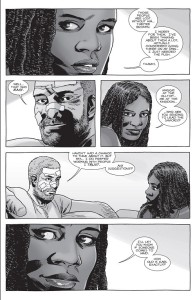 I always enjoy Rick and Michonne’s interactions, and this issue was no different.  It makes sense that, despite Michonne wanting to head back out to sea, Michonne realizes that she’d be of great use at The Sanctuary.  And we know that she already thought about going there, anyway, so all Rick needed to do was what he does best: give people that extra incentive to step up and lead.

It’s interesting watching our characters that we’ve watched grow, now become leaders.  You’ve got Rick in Alexandria, Maggie at The Hilltop, Michonne possibly heading for The Kingdom, and the possibility of Carl leading the Saviors.  That last one is a stretch.  Carl may be hardened due to his injury, but I don’t see anyone at The Sanctuary taking their orders from a kid.

Finally, there’s the end with Eugene managing to make contact with someone on the radio.  The comic has been building this for some time and it’s a nice way to end the issue.  It seems like there’s a glimmer of hope, but as of now, it’s just a voice.  Who’s at the other end?  Are they trustworthy?  So many questions to come out of this, which is a good way to keep people invested until the next issue.  Good ending to a good issue.