There’s been a lot of speculation regarding Negan’s role in the television series.  Casting, level of brutality, how would the show handle his frequent use of the word ‘fuck,’ when would he appear.  All this before we got any official or even rumored casting.  Even leading up to the announcement of Jeffrey Dean Morgan, we heard other names in contention. But now, we have official word.

Negan’s reputation in The Walking Dead is well known to many, primarily, I feel, because of his very first action that we witness.  It not only leads to the death of a character, but shows that he’s a very serious threat and should not be taken lightly.  The same could apply to the Governor, who also had a mean streak.  This is the man who took great pleasure from raping Michonne, after all.

But Negan’s actions left a lasting effect within the universe and even for comic readers.  So let’s take a stroll back to see his first on-panel appearance to see just what made this guy such a threat.  It’s important to keep in mind that the previous issue, The Walking Dead #99, gave no indication that something this would happen.  Then this comes out and fans go nuts over what Kirkman did.

So at this point, we as an audience still don’t know everything there is to know about the Saviors, except that they’re bad.  However, as Dwight learned the hard way, you don’t underestimate our main characters.  While Alexandria may have softened the people already within the community, as we’ve seen in both comic and show, Rick and his crew, though weakened at times, refuse to break their resolve.

I like the false sense of security built up to the showdown.  Rick and company have traveled at night before, despite the dangers.  It’s not unlikely that they’d choose to camp out in the middle of the night just in case something bad happened on the way to the Hilltop.

There’s a bit of optimism going into the night and we all know how that works on The Walking Dead.  But then, there’d be no immediate reason to think that something bad would happen.  These people can handle walkers no problem.

Know why?  Because walkers make noise, but people?  They know how to keep quiet, and that’s what leads the group to being surrounded by the Saviors.  It’s pretty clever, I must admit, especially since the Saviors probably expect the people from Alexandria to be alert.

Here’s the scary thing about Negan: he’s physically imposing, carries a lot of presence, has a deadly weapon in his hands…but unlike the Governor, the man has a sick sense of humor.  The amount of fucks that the man drops in the span of an issue is impressive and it makes me wonder how the show is going to handle him, given how even on AMC, they wouldn’t be likely to drop multiple F-bombs.  I could be wrong.

Having never seen Breaking Bad, if I’m not mistaken, that show could get away with saying ‘fuck’ at least once per season, but Negan is a different sort of motherfucker.  And the man has every reason to be pissed at Rick for his group killing off some of the Saviors.  But no, he’s calm.  Why?  He has the advantage of numbers, weapons, and up until now, he’s existed as a ghost.  All Rick and the others know about him has been through word of mouth.

But when he appears, he carries as much influence as Rick has been led to believe.  His plan is outrageous: the residents of Alexandria have to surrender half their items to him.  They answer to him because he has the numbers to take them down, if necessary.  It’s insane, but this is just the start of learning what makes Negan so threatening and how he can be so easygoing when he’s about to commit homicide with a bat wrapped in barbed wire.  Hell, Lucille is a character in and of herself.

Often, when the villain has the heroes cornered and could kill them at any moment, they waste their time talking.  There’s a category for this on TVTropes: “Why Don’t You Just Shoot Him?”  Negan could just kill everyone present, but there’d be no fun in that.  Negan needs to make a lasting impression, so he draws this out for as long as possible, coming up with reasons like sparing Carl because his story isn’t over or leaving Heath and Michonne alive because of the race card.  Of course, Rick is the obvious choice, but I’ll get to that later.

So, after drawing out this process and deciding on making a game out of this, you all know where he lands: Glenn.  A character who has been with us almost from the beginning.  He’s been there so many times for the group, has an ongoing relationship with Maggie, and the comic just killed off Abraham, so you may be thinking there’s no way that Kirkman would kill off Glenn.  You want to hold out hope that somehow, someway, a light will shine through the darkness and someone will swoop in to save the day.

Maybe on the show, where Judith actually survived, you could have that sort of optimism, but this comic pulls no punches.  So when Negan brings the bat down on Glenn’s head, you know that Glenn’s time is up, even if you’re still rooting for someone to rise up and be a hero.  The group is surrounded and was unprepared for this assault, so all they can do is watch.

It’s a gruesome moment made worse by the fact that Negan is merciless in his attack.  This was pretty depressing to read, I’ll admit.  But at the same time, it’s a well done moment full of tension and dread about Glenn’s ultimate fate, not to mention that Negan takes no mercy, especially when he faces little to no resistance from Rick.

And when all is said and done, Negan not only takes great glee from what he’s done, but because he’s so certain that Rick has no comeback for this.  He just brutalized Glenn right in front of him.  Even if Rick somehow managed to attack Negan, he’s still surrounded by Saviors that would rip him and the others apart.  Rick has usually lived up to his threats, but now, threats are all he has.

Right now, Rick can only listen.  He can snarl, yell, threaten to kill Negan, but right now, this is Negan’s time to shine as he speaks of a new world where Rick Grimes isn’t the big shot leader that he’s been portrayed as for so long.  With his message clear, Negan leaves the broken group behind with the body of their dead friend before them. 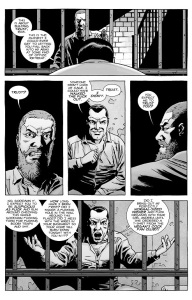 So let’s take a minute to exhale and go forward for a bit before jumping into this issue.  It’s interesting how the dynamic between Rick and Negan has evolved from Negan’s introduction to now.  The two are complete opposites of one another and Negan is a different sort of evil from the Governor.  Despite having him as prisoner, Rick still won’t kill Negan because he wants to prove that his method works.  He refuses to cross a line because there is a line.

Rick is idealistic, despite living in a pessimistic world.  Even if he can’t solve all of the world’s problems, he can at least prove that he’s not as bad as Negan by keeping him alive.  In effect, he wants Negan to suffer all by his lonesome while the world changes around him.

Back in issue #100, though, Negan is more sadistic.  He also won’t kill Rick, but not just because he wants Rick to suffer- he wants to break him psychologically and make him feel weak.  Negan knows who Rick is and uses his leadership to his advantage.  It’s not just that Negan killed Glenn- it’s that he killed him with no mercy, on purpose, and did in front of the others, who could do nothing but watch.

Negan won’t kill Rick because that could spur the other communities into action.  Douglas had already given Rick leadership over Alexandria and at this point, people know of Rick’s fortitude.  Granted, his reputation would grow even more after the time-skip, but here, killing Rick would have the opposite effect of what Negan wants, which is paralyzing the communities through fear.  To casually kill Rick martyrs him, which would be his victory.

Killing someone else neutralizes any immediate threat from Rick, keeps Rick alive so he’ll remember what happened, and shows everyone just how brutal Negan is as a villain.  It’s a strong introduction to his character and Robert Kirkman knows just how to leave you stunned at the end of an issue.

Again, Glenn has been with us for so long, you don’t expect him to be killed.  Especially when you consider that Abraham was killed only a few issues before this.  So that’s two main characters that have died in a short amount of time.  It wasn’t the first and wouldn’t be the last time Kirkman killed off more than one main character in a short amount of time, but I certainly didn’t expect another main character to die so soon.  Someone from Alexandria, maybe, but not a mainstay and certainly not Glenn.

Even still, a very powerful moment.  When Lori and Judith were killed, it was a big deal.  Carol, Hershel, Tyreese, Abraham- it’s not uncommon for this series to kill off main characters, but to have one beaten to death in front of the others further proves that, in this world, no one is safe. 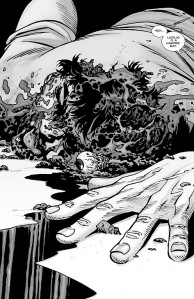 Negan left a strong impression with his introduction and I’m always wondering whether the show will translate his first brutal attack from comic to screen.  Now that we have an official casting, there’s bound to be more speculation talk.  Until then, we appear to now have a face for our foul-mouthed, bat wielding motherfucker.  Now we just sit back and wait for him to appear on screen.  This will be fun.