#144 was no doubt a game-changer for The Walking Dead.  So Issue #145: “Blood for Blood,” is an appropriate follow-up that is less about action and more on reflecting, reacting, and regrouping in light of what Rick and company have discovered.

And one of the better ways to do that is by having almost no dialogue in the issue’s first few pages.  We can read the horror and sadness on the characters’ face, particularly Michonne.

She, I feel, had the most impactful reaction because she realizes what she’s lost.  After spending so much time as a loner and even more time denying herself the happiness that Rick said she deserved, Michonne didn’t accept how good she had it until she saw Ezekiel dead before her eyes.  One of the few times she would have been willing to drop her defenses and pursue a relationship, and now, she will never have that chance with Ezekiel.  She had a great life, all things considered, but she didn’t truly appreciate what she had.

And with that bond gone, it makes sense that Michonne would lash out at Lydia.  But I’ve gotta give credit where it’s due: Lydia handled that situation well.  We know how much of a cold killer Michonne is, and Lydia knows next to nothing about what Michonne is capable of, but she’s ready to defend herself and kill Michonne nonetheless.  Even though Lydia has pulled this innocent routine so far, it’s nice to see that she isn’t helpless.  And it’s interesting to learn from Lydia that even this level of brutality is far from what she expected of The Whisperers.

Again, this could potentially ruin the peace and stability Rick has fought hard to maintain.  The three communities may not see eye to eye on everything, but they’re a lot better now than before the time skip.  These 12 murders will lead to people wanting to retaliate.  Rick is trying to be diplomatic about this because he doesn’t want to start another war and he knows that Alpha has a massive swarm of roamers waiting for him.

But I like how Michonne calls out Rick’s double standard, and Rick even agrees: if it had been Carl or Andrea’s heads on one of those spikes, he’d be more willing to take a stand, and he knows that.  But he has to consider what he stands to lose, particularly his position of leadership and respect he’s earned from the people.  People like Michonne and Andrea just want to act on instinct- not because it’s right, but because it will make them feel good for what The Whisperers did.  That temporary bliss would lead to more suffering when, not if, The Whisperers retaliate. 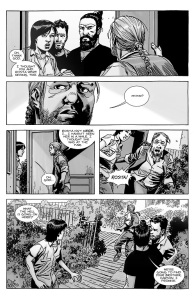 And just like how Maggie hasn’t told Rick about what happened to Gregory, this revelation is sure to cause a split in their friendship.  But then, no one knew just what The Whisperers were capable of- Lydia even points out that they’d never encountered a group of Rick’s size before. 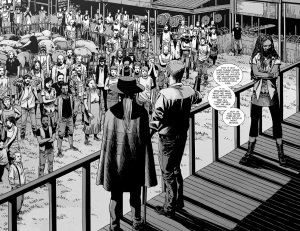 So now Rick is about to deliver some of the most devastating news he’s ever had to tell a group of people who will no doubt be thirsty for blood.  Everything: community stability, the peace, and cooperation are now in jeopardy of collapsing in wake of The Whisperers’ crime.

How will this affect things?  We’ll find out next time.  “Blood for Blood” did not need to be fast paced or have any action.  After the discovery at the end of #144, this issue needed to just give us character reactions and let them take in the full weight of their current circumstances.

The twelve murders have already put people at odds, with Michonne and Andrea wanting revenge, Rick trying to maintain some calm, and a group of townspeople unaware of what has happened to twelve of their loved ones.  Sure, Negan and the Saviors were a force to be reckoned with, but the surrounding communities managed to band together to overtake them.  Here, all of said communities have been affected and Rick’s leadership, like Maggie, is sure to be called into question.

Looking forward to September when we return.  If the previews are any indication, it looks like Rick and Maggie will come to blows.  That’ll be fun.