The Walking Dead #140: “Life and Death,” continues to open up the world that Kirkman expanded upon in the previous issue.  However, with the ongoing situation at The Hilltop, Carl traveling with Lydia and the rest of The Whisperers, and a surprise change of events in Alexandria, we’re building up to will probably be some hairy situations. 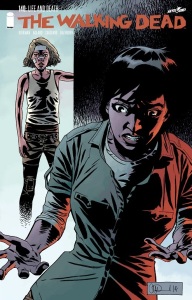 Ever since Negan’s defeat at the end of All Out War, society has slowly rebuilt itself.  As far as we know, there haven’t been any serious conflicts comparable to All Out War, but we could be building towards one.

Continuing with Maggie’s troubles at The Hilltop, she finds herself in a somewhat tricky predicament on how to deal with Gregory.  He tried to poison her, but Maggie isn’t completely sure how to make an example out of him- at least, not at first.  Gregory is quite the slimy and tricky individual when it comes to fanning flames.  He’s never really been a fan of Maggie’s leadership and has been the one to try and incite everyone against her.  Rather than own up to his attempted coup, he cowers behind lies.  Again, I have to wonder how someone like Gregory was once in charge or how some of these folks wanted him to be the next leader.

This puts Maggie in a difficult place because she hasn’t had to make the same number or level of difficult decisions that Rick has.  She wants to follow the example he set by keeping Negan alive- even though that may end up biting everyone in the ass down the line- and wants to stick to this no killing code.  However, as Jesus correctly points out, Gregory is a different sort of creature than Negan.

With Negan, what you see is just what you get.  He will always put himself on the frontline and make his presence known.  If he needs or wants something done, he could do it himself.  Sure, he had The Saviors at his beck and call, but Negan was a leader who took the charge when necessary. 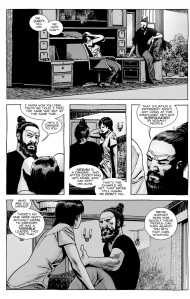 Gregory, on the other hand, may have the potential to be a great leader, but he cowers behind others.  If he was so hell bent on getting rid of Maggie, he could just do it himself.  Instead, he takes a more manipulative approach by trying to turn some of the Hilltop residents against her.  All Gregory needed was the right and ripe opportunity, which he got when Carl retaliated against the local boys who attacked him and Sophia.  When that happened, all the citizens needed was a little push.  My hope is just that, should Maggie go through with this, Gregory doesn’t become a martyr since some of the folks on The Hilltop do respect him.

I like how much of an advisory role Jesus now has.  We know he’s a bona-fide ass kicker, but he’s also sort of the anti Dale.  Instead of suggesting the most peaceful or diplomatic situation, he recognizes the severity of a situation for what it is and will advocate force when necessary.  He’s proven to be vital when Maggie may start to second guess herself.  She needs to put her full focus and attention on the current situation.

Unfortunately, this means abandoning the search for Carl, who we don’t get to see a lot of, but we do get a glimpse of The Whisperers’ territory.  It’s simplistic, but the numbers are vast from what we see and they appear very civilized.  Though the numbers don’t seem to be as great as we’d previously heard, there are plenty of members who probably could have overtaken The Hilltop if they wanted.

Briefly on Rick and Michonne, as their conversation kicks off the issue and picks up directly from the end of the previous one.  Michonne still talks about the life she deserves to have, which isn’t one of happiness.  She’s not wallowing in pity, but she isn’t embracing the current lot that life has given her- a second chance. 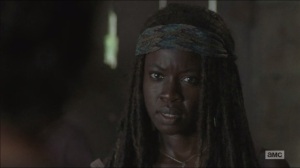 It’s the flip of what Michonne is going through right now on the television series, as she was the one pushing the group to take Aaron’s advice and head toward the Alexandria Safe Zone.  She believed that the group needed this, which they did.  Here, it’s the opposite.  Oh, and I did like the banter between Rick and Michonne.  It’s nice to have the two interacting again.

Now, as for this ending- Robert Kirkman once again throws in another curveball.  So Negan gets cleaned up a bit.  Okay, that’s fine, but then the lock on the cell is off and the man is free.  I don’t know how that happens without someone noticing, given how on guard Andrea and the others were when cleaning down Negan.  Though I’m sure Rick would be aghast that Negan was even let out at all.  Now, however, he’s apparently free. 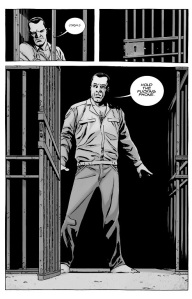 I’m sure this will be explained in future issues, but for the moment, it’s an interesting twist since Negan is still probably just as much of a threat now as he was before.  No, he doesn’t have The Saviors with him, but his presence alone is intimidating and everyone in the Safe Zone is fully aware of what he can do.  What will Negan do?  Was it internal sabotage that got him out?  We’ll see.