Welcome back to House of Lies, as our favorite management consultants return for the show’s fourth season. At the end of the last season, Jeannie dethroned Marty as head of Kaan & Associates and ended up sending him to the slammer, but obviously things wouldn’t stay that way forever. So let’s see what happens when Marty returns from his soul searching in the desert. 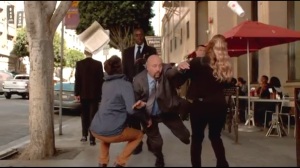 The season begins with Marty still in the desert, but before you know it, he’s back in a suit and walking the streets like nothing happened. Enlightenment just wasn’t for him. While some people believe in dharma, he more believes in the dharma of search and destroy, taking no prisoners, and kicking ass.

At Kaan & Associates, the main pod makes preparations for attending a funeral and claiming their target, even though there’s only word that he will be attending. Doug got a sympathy card, but no one’s on board for that. Go figure. Meanwhile, Jeannie- now eight months pregnant- has to contend with a certain Rat Man, as she already has 15 new messages from him.

Kaan & Associates has become a bit more recreational since we last saw it, but Marty still commands respect, as seen when he coldly stares down an employee who yells out “What’s up, my nigga?” The music stops and Marty’s stare could pierce the poor guy’s soul.

On the flip side of that, Clyde tries speaking with another employee, Kelsey, played by Valorie Curry from The Following, about her many tattoos, but she shuts him down, saying that he’s secretly just threatened by strong women. 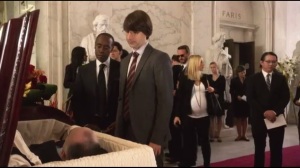 We follow the pod to a cemetery and see one attendee exiting a police van and having his cuffs removed. This is Ellis Gage Hightower, played by Demitri Martin. Hightower is the CEO of Gage Motors: inventor, bad boy, godhead of electric cars, and tax evader. Ellis goes inside and pays his respects, all while taking time to spit at the body. Time freezes. Marty explains that the pod is desperate to close on Ellis. Doing this will the pod legitimacy, street credit, and salvation.

Ellis runs into his number two, Bruce Karp, to discuss their new product, not to mention that it cost Ellis a lot of money to have it FedEx’d from prison. Bruce isn’t pleased with Ellis’ recent behavior, stating that Ellis just thinks about himself. The plan was to position the Phoenix release with his prison release, but Ellis says that he is the product.

And Bruce isn’t blameless, as he apparently collected the profits that were the result of Ellis design work on lithium technology, which could get him the Nobel Prize. And what does the pod think of this? It’s nice. Bad is better than good because they can fix bad.

All right, time to deal with Rathman the Rat Man, an exterminator who finds the pod’s expansion models lackluster. As such, he’s cutting the pod’s fee by half. If they aren’t satisfied with that, Rathman offers to go across the street and work for Monica. He doesn’t have much faith in Kaan & Associates, as he feels that they’re circling the drain.

Marty lashes out at Rathman, prompting a flashback where a drunken Jeannie showed up at Marty’s and tried to have sex with him. After all, she wasn’t wearing panties. The two start to get it on, but Marty’s conscience gets to him and he tells Jeannie to leave. That’s tough. Kristen Bell shows at your place not wearing panties and you’ve gotta turn her away? Hard decision. 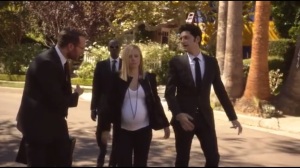 Back in the present, Jeannie tries to appeal to Rathman, at first, but then she lashes out at him, too. Doug is worried- the pod is broke and they can’t afford to lose this account, no matter how shitty. He wants to go back and sort it out, but when he begins to, the rest of the pod drives off. Poor Doug.

Jeannie and Marty get some work done, but Jeannie wants to talk. She’s surprised that things are going so well- soon enough, they will have some billable hours this month. She thought that things would be harder for them, not to mention her pregnancy and how awkward things between the two of them could be. Things look to be going well.

Marty, however, disagrees. He admits to needing her, but he can’t get over what she’s done yet. What they’re going through is a transition. Once the transition is over, Jeannie needs to leave. She’s surprised, given how she owns 50 percent of the company, but Marty is convinced that her actions trumped her intentions. This process for the two, Marty says, is cyclical- they’ll work, then hurt each other, get over it, and then do it all over again. It’s like having a wound, and then pulling off the scab. 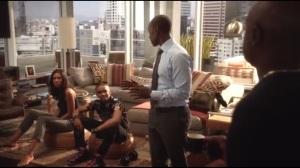 At House Kaan, Chantelle and Roscoe play a video game on Roscoe’s brand new Xbox One. Roscoe’s been quite busy, recently. His father texted to see if he wanted to see a movie, but Roscoe just hung out with Greggo, Skyler, Ethan, and Tom-Tom. Also, the Xbox One is something that Roscoe would have gotten for his birthday, but he had enough leftover Christmas money from Monica, who is trying to buy his love.

When Roscoe lashes out at both Jeremiah and Roscoe, Marty reminds him who is in charge and tells him not to be so upset over what happened last year, but Roscoe brushes it aside and heads out.

We follow Roscoe as he heads to a shop, purchases a ton of purses, and then meets up with some other teens, where he sells the purses for a profit. Oh, and they smoke pot. These folks are already better than Lex.

The episode then flashes back to Jeannie visiting Marty in prison. They won’t talk regrets. Marty accepted a plea deal so he can get back to work faster. As the two look through financials, Jeannie drops the bombshell that she’s pregnant. After her drunken encounter, she met up with an old college beau- Edwin. They’re going to try and make things work, even though he lives in New York. She also plans to keep the baby.

She never thought her life would play out this way. After all, she froze her eggs in hopes that she would eventually find the perfect sperm that had all of the characteristics she lacked. That, in turn, would cancel out her flaws. But then, she ran into Edwin. The idea of having a baby trumps her idea of a perfect life. It’s not Marty’s business, though, as he shows no sort of response until prompted. Congratulations.

Oh, Ellis is also in the same prison as Marty. Go figure. The two get to work.

The episode comes to a close as Marty lets out an enraged yell in the desert.

I’d like to think of “At the End of the Day, Reality Wins” as House of Lies in a transitional state. It deals directly with the fallout from the end of the previous season, as well as how Kaan & Associates has suffered for it. During Season Three, they were working their way up as their own management consulting team. Now, however, they’re broke and must scavenge whatever they can to help rebuild their reputation.

The look and feel of Kaan & Associates is different. Before, everything was businesslike and professional, but now it looks almost like a playground full of 20-somethings and millennials that are eager to please. I do have to wonder how K&A managed to pay for this, given the financial state it’s in right now. I assume more explanation of that will come as the season progresses, as well as the whereabouts of Caitlin, Jeffrey, and Will. I assume they’re still around, but maybe off working on something else. After all, they were the original pod members of K&A with Marty, so it would seem odd for the show to just bump them off now that we have the original team back together.

Key players this premiere were Marty and Jeannie, as both must come to terms with Jeannie’s power play last season. Jeannie looks to acknowledge that what she did was wrong, and she never meant for it to come to Marty going to prison, but actions speak louder than words. As Marty told her, her moves trumped her intentions. Marty and Jeannie are toxic together, but they acknowledge that they do need each other in their lives.

I can’t get enough of their scenes together, and Kristen Bell and Don Cheadle have been at this for so long that their conversations feel natural as opposed to acting. The moment where Marty told Jeannie that they just go around in a painful cycle hit hard because it shows their inability to reconcile.

They can’t because they end up hurting each other all over again. It’s painful and part of them would probably like to pick up the pieces and start over, but Marty looks to be past the point of forgiveness at this point. He’s not shutting Jeannie out. In fact, they tag team to lay a verbal smack-down on Rathman the Rat Man. But things won’t go back to the way they were. 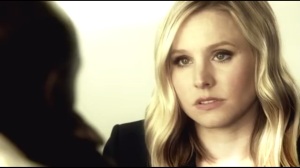 This episode dealt a lot with characters accepting that life wouldn’t play out the way they hoped. Jeannie had her whole life mapped out ahead of her, yet the idea of having a baby trumped her vision of a perfect life. In this fast paced world of management consulting, when the impossible can and does happen, there’s no point in trying to plan things out ahead of time. Rarely do they go according to plan.

And Marty would like to have a simple family life, but there’s still tension between him and Roscoe. This would be surprising, but Roscoe has been presented as a rebel from the start, so I’m interested to see what the show will do with him this season. That confrontation between Marty and Roscoe was tense and I keep wondering if these two would ever come to blows.

Side-note, I’m fine with Chantelle still being around, as she’s there as a companion for Jeremiah, but also a constant female figure in Roscoe’s life since Monica is trying to buy his love with money.

Demitri Martin had a good start this episode. He plays the part of the smarmy know-it-all very well, but he looks to be more calculating and intelligent than let on. And given how he and Marty are in the same prison, it’s only a matter of time before the two start talking.

So this was a good start for the season. The pod isn’t fully in disrepair, but they’re trying to mend their own broken fences. For Marty and Jeannie, however, they may be far too gone for that.