One of the biggest strengths of The Walking Dead has been how it tackles moral ambiguity. At what point is it acceptable to kill? Is it even acceptable? 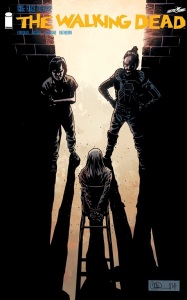 Rick and company have been willing to kill many times before, whether to protect themselves, instinct or force of habit. However, as both the comic and show have pointed out, there comes a point when characters have to stop and question who they are and what they have allowed themselves to become.

Having too much power, control and the ability to take a life can turn you into someone you’re not. Go too far and you become a monster. We’ve seen this with characters like Negan and the Governor. People like Rick and Carl teeter dangerously to crossing that line, but they manage to bring themselves back.

And though Kirkman has slowly given us more information regarding The Whisperers, Issue #135: “Face to Face” mostly deals with the aftermath of Carl and Sophia being attacked by two neighborhood boys. More than that, it gave a great deal of focus to Carl and Maggie as they deal with the Hilltop residents.

I was a bit surprised to read that both of the boys might live, despite their injuries. Not that I expected them both to die, but given how hard Carl went to town on those two boys, I thought one of them would bite it. Again, at least they know not to screw with Carl. 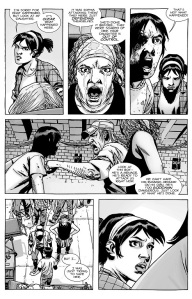 That said, I’m not a fan of how the parents react to what Carl did. They have every reason to be upset at what Carl did, yes, but they’re overlooking what their boys did to Carl and Sophia. For Tammy to claim that Sophia brought it on herself, saying that Maggie cares more about her own child than the rest of the Hilltop and acting like Carl is the only one at fault already makes me dislike her. Carl is also in the wrong, to an extent, but I’ll get to that in a second.

These parents seem like the type that would coddle their children and are convinced that their precious angels could do no wrong. Did she not see what they did to Carl and Sophia? The parents call Carl a menace and say that Sophia is out of control, never admonishing their own kids for what they did.

These are not good parents. There’s no doubt that they care for their boys, but they are not saints. They cannot be shielded from harm forever. Hell, I wonder how many times these parents may have overlooked what their kids did. 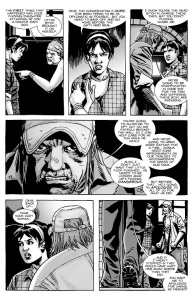 And they are overstepping their boundaries to suddenly demand compensation from Maggie. I assume Kirkman doesn’t want us to like these people because they take no responsibility for what their kids did to Carl and Sophia. They’re way too rash and quick to react without considering the possibility that their kids instigated the violence. 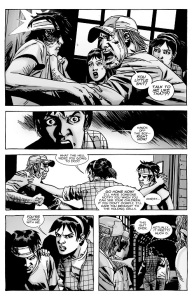 At the very least, Maggie is willing to see both sides, even if she is being bombarded. Maggie is not Rick. We know that. But at the same time, she doesn’t have to be. She’s being as assertive as possible, but also showing some diplomacy since, as pointed out, she wasn’t elected to this position. As much as I like Maggie, this is not a role that the residents of the Hilltop chose to give her as much as she just inherited it from Gregory, who did not want to stand up to Negan.

Yet, given how peaceful life has been in the Hilltop since the time skip, Maggie looks to have done a good job. No one has rebelled and society is productive again. Sure, her laughing off Gregory last time wasn’t exactly the best way to react, but she’s limiting resources for when they’re most needed.

Regardless of how good of a job she may have done, Maggie’s abilities as a leader have now been called into question. And given Gregory’s plan at the end of the issue, whether serious or not, it looks to me that some folks in the Hilltop look to rise against Maggie now that they feel she’s not fit to be in charge.

Maggie is trying to put out as many small fires as possible because any mishap will ruin the vision she and Rick share: a return to civilized society. They are still a far ways from that, but the two are taking a daring stance by declaring that they will no longer kill anyone. Given the horrible things these people have done to survive, it’s strange that they suddenly want to take the high road. Maybe they had a change of heart after Negan bashed Glenn to death, but it’s a big shift, to say the least.

Or maybe I’m looking too deep into this. It could be that Rick and Maggie realize that having more people alive means more people can pull their weight and contribute to a thriving world. Perhaps Rick still wants to prove to Negan that people can thrive on working together, not fear.

This sort of pacifist attitude is not one that I expect Maggie to stick to. Not in The Walking Dead. Her daughter almost died, yet she still sees the two attackers as becoming productive members of society when they grow up. A bold prediction to make, Maggie. Let’s just hope it doesn’t come back to bite you in the ass. 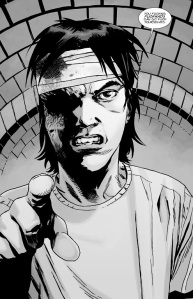 Carl Grimes is going to a very dark place. He’s showing shades of both Rick and Negan in his personality. He acknowledges that he went overboard, but he is not about to let these adults push him around. Carl is no pushover, but he has to realize that his brash actions have consequences.

That’s why he could not fathom why Maggie would lock him away when all he did was defend Sophia. In his mind, he did the right thing. He took it too far, he admits, but he doesn’t regret it. The problem is that he did not stop when he could and should have. And telling the adults to go fuck themselves just paints him as a violent brat in their eyes. 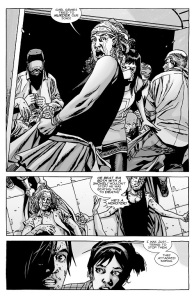 Still, his actions make sense, as crazy as that sounds. He cares for Sophia and he would not let any harm come to her or Maggie, if he can prevent it. Rick would be no different. Hell, Rick may have killed, if he wanted to. In my opinion, if Carl should apologize for anything, it’s for going too far.

I don’t think he should have to apologize for what he did, though. Keep in mind that he and Sophia were ambushed and Carl still only has one good eye. He’s already at a disadvantage in a fight and taking him off guard from behind does not do him any more favors. He didn’t think straight in the situation- he just acted. 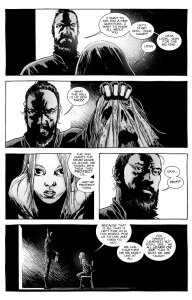 As for The Whisperers storyline, which I don’t have a lot to say about, newcomer Lydia keeps Jesus in the dark, for the most part, by not giving him straight answers. The Whisperers live everywhere? That’s pretty vague. But I do think Lydia looks pretty clean for a teenager who had been wearing the skin of a roamer and lurking amongst them. Again, there’s still much more to learn about this group.

So a good issue. Tension is building at the Hilltop due to Carl’s actions and some folks look ready to overthrow Maggie by any and all means.