An issue of The Walking Dead without Rick Grimes in it? Blasphemy. 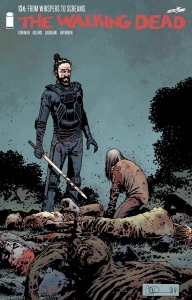 But on a serious note, I didn’t mind the lack of Rick in this issue of the series. Issue #134: “From Whispers to Screams” gave us only two storylines: Carl, Sophia and Maggie dealing with issues at The Hilltop, while Jesus deals with the new group threat, which now has an actual name. 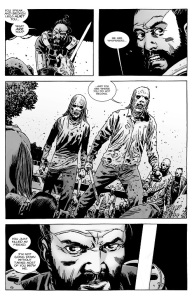 I remember hearing a rumor after issue #133’s release that this group would be called The Whisperers, and now that’s their actual name. We still don’t know much about them, but I appreciate how Kirkman is spacing this out and slowly unraveling this group. With each issue, we get bits of information about them, but never enough to satisfy your taste. For example, do they claim territory? That could explain what one of them meant when they told Jesus that he was where he did not belong. Again, it’s all speculation, though. 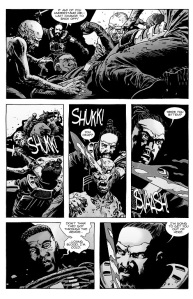 Though Jesus’ portion of the issue was mostly action, I did like the Charlie Adlard’s penciling on the panels. And it wasn’t just nonstop slicing and dicing, as we did get some bits of dialogue. That’s gotta be some intense concentration Jesus has to talk with his team while still trying to comprehend what and who The Whisperers are. 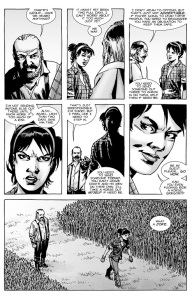 So onto The Hilltop. Maggie’s moment is brief, but it illustrates an issue that also plagues the Alexandria Safe Zone: the group’s ability to lead. When Rick and company first arrived, people were aghast at his excessive use of violence. The people at The Hilltop were completely against the idea of violence and had to be coaxed into it, even before they’d even set eyes on Negan and The Saviors.

Yes, Dante still being missing could cause people to worry, but at the same time, Maggie doesn’t want to put even more people at risk by sending them out on a rescue mission. Maggie has no idea what’s out there, so she’s trusting in Dante to handle himself. She recognizes that she needs to keep people safe, but she won’t worry over him just yet. Gregory thinks otherwise and sees the need for immediate action. If there was ever a point where the people of The Hilltop would question Maggie’s leadership, based on what we’ve been given, I feel this would be the starting point. 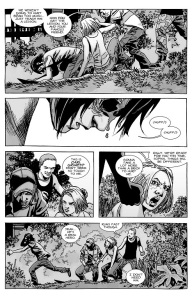 Then we have Carl and Sophia. After having a quiet moment to themselves, they come under attack by a pair of cowards. This actually reminded me of the issue where Rick, Carl and Abraham are attacked by the marauders when Rick snapped and gutted the men. We get that similar burst of outrage from Carl here as he goes to town on the boys with a shovel. 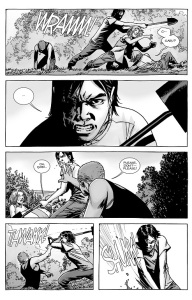 Carl did not come to The Hilltop for this. He came to become an apprentice and develop into his own man without Rick by his side. Think back to when Carl attempted to become executioner when he considered killing Negan. Rick told him that there was a better way. Here, Carl’s only option was to fight back. The scene itself was very visceral and reminded me of the brutal way in which Negan murdered Glenn. 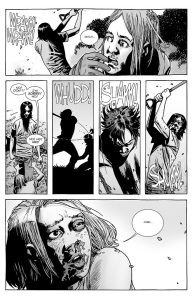 This is Carl Grimes going down a very dark path and it could easily threaten the peaceful life he’s trying to set for himself at The Hilltop. And there’s no doubt in my mind that people will pin the blame for this on both Maggie and Rick for being the root of this violence. That said, it was a kick-ass moment for Carl. We’ve seen him hold his own in battle. For the most part, though, he’s been able to keep his anger in check, much more than Rick. Here, however, he and Sophia’s lives were put in grave danger and he reacted as I feel Rick probably would have. Hell, these guys had it coming. Even if Carl and Sophia claim that Carl fought in self-defense, this fight, combined with Gregory’s questioning Maggie’s leadership, will cause some real headaches for the people of The Hilltop.

At least now the kids in the neighborhood know never to screw with Carl Grimes.