So now that Hank has a job, let’s see how he settles in with his coworkers and the revelation that, gasp, he has a son.

The episode begins with Hank receiving the one gift that every man wants: a murse.  Karen thought it was very rock and roll and appropriate for the first day on the job.  Karen’s glad that Hank got a job, but more so that he is ready to embrace change.  Before things get hot and heavy, as they would, Hank tries to tell Karen about Levon, but Karen insists that nothing would surprise her at this point.

But he doesn’t get a chance, for a disappointed Charlie and Marcy emerge from the bedroom.  She even tossed his salad, but no good.  The more Marcy sucked his tiny weenie, the smaller it got.  I love these people.  I really do. 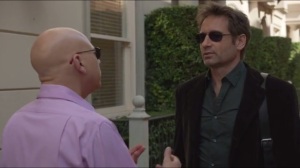 En route to work, Hank isn’t too angry that he didn’t get to spill the news to Karen.  Though they were about to make sweet love, chances are Karen would have been angrier if Hank waited until after the sex to drop the bombshell.  Hank’s not a real fan of Levon, either, as he finds him annoying.

The mother is a woman named Julia, who wanted to be an actress at one point.  However, Hank met and impregnated Karen and the rest is seven seasons worth of history.  Charlie doesn’t get to come with Hank to work, though.

Hank shares his office with Terry Dunn, played by John Madison Tye, who has a very manly grip and a giant question mark on…I guess his gender.  After an awkward moment, Terry leaves, but he’s replaced by Hugh, played by Chris Titone, who is munching on a cupcake.  There are still some left, if Hank wants one, which he doesn’t.  See, sometimes Rath gets a bit antsy, so Hugh tries to cheer him up with cupcakes.  How sweet of him.

Terry returns, but he doesn’t want a cupcake.  Maybe Hugh doesn’t have the flavor he likes.  But Hank tries small talk again before he accidentally accepts a Facetime request from Levon, who is lounging around.  Levon wants to hang out, but Hank is, you know, working.  Melanie pops in and lets Hank and Terry know that Rath is stuck at a meeting with the network, so they can do whatever they want until lunch.

So with more free time than expected, Hank shows up at Levon, who answers on the first knock.  He brought Levon a cupcake, but Levon wants a hug instead.  Why don’t these people like cupcakes?

Levon has tons of pictures of Mom around, which isn’t too odd for a college student, but still a bit strange.  Out pops Julia herself, played by…

…Oh my God, it’s Heather Graham!  And her expression pretty much mirrors mine when I saw her on screen.

Sorry.  So anyway, Julia is just as surprised as Hank is to meet her after so long.  She heads into a room where she and Levon have one of those muffled off-screen arguments that television and film are so fond of.  When they emerge, Julia tells Hank that she plans to be in touch.

This has all happened so fast and so soon that it’s a bit much to process all at once.  Hank is still unsure whether Levon is telling the truth, but with Levon, you know, standing right there, he doesn’t make the situation any better.

Back at the old grind, the writing staff is…pretty annoying, to say the least.  Hugh brags about and takes a picture of his burger.  Goldie, played by Mary Lynn Rajskub, wants to be 100 percent sure that her food is gluten-free and hasn’t been in the vicinity of any shellfish.

Rath isn’t a fan of Hugh taking a picture of his burger and lets him know that he should spend more time working on something better than the five ideas he gave Rath earlier.

Noticing how quiet Hank is, Rath invites him to open up, which he eventually does.  While the crew is sympathetic, Rath is quick to turn this news into an idea for the show: Danko has a baby with a stranger, but maybe the stranger turns out to be a cousin from the past.

Terry brings up the rape allegations Hank had to endure, bringing the room to a screeching halt.  He goes on the offensive, though Hank’s banter keeps everyone, including Rath, laughing.

Well, everyone except Goldie, whose suddenly looking terrible and remarks that her food was not gluten-free.  With no time to spare, she pukes everywhere, even over one writer’s tablet that his mother just bought him.  Poor you.

Hank inquires about a bar where he could meet someone for a drink.  Hugh is ‘totes’ up for going this evening.  Well, that’s one.

Yeah, Hank leaves the studio and heads to a bar where he meets up with Julia.  He begins by asking why she never told him, but what Julia last remembers is that the two of them were running around the city until the phone stopped ringing.  Julia called to make sure Hank wasn’t dead, and he wasn’t, but he did meet someone special.  Julia wasn’t all that offended since the two of them were never really together, so when she became pregnant, it seemed pointless to tell Hank.

She’s been in the area for a few months.  When Levon came along, he derailed the whole acting thing, so she became a dental hygienist.  Levon later decided he wanted to act and it was time for a change of scenery.

However, Hank and Julia will go nowhere.  She would prefer that Hank stay away from him since Levon has expectations that the two will make up for lost time.  Julia doesn’t have the heart to tell him that Hank isn’t that type of guy.  All right, so now both of them have made presumptions about Hank’s character.  She says that it’s fine for him to walk away and leave them alone.

Meanwhile, Charlie pops Viagra.  Stu did, too, but he did it for fun, turning his cock into a battering ram, the T-1000 of boners.  Marcy’s remembrance of Stu’s cock does nothing for Charlie’s ego, though.

Hank calls to tell Charlie that he wants out of the show.  Too much stuff in his personal life is driving him up the wall.  Charlie advises that Hank talk it out with Rath.  Stop talking to Hank and go give Marcy some attention, Charlie! 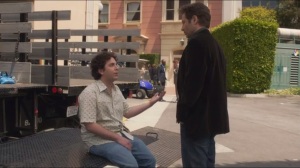 As Hank continues along, he sees Levon arguing with two security officers.  Hank pulls the men apart and drags Levon away.  Apparently Hank had not been answering his phone, but Levon thinks that Julia wants to break the two of them up because of Levon develops a relationship with Hank, there’s a chance that Julia could lose him.  She hasn’t told Levon much about Hank’s character, so Levon did his research.  Though Levon loves his mother, he acknowledges that she can be a bit much.  For someone like Levon, who Hank refers to as a boner killer, that’s to be expected.  Sure, Levon isn’t what Hank expected at this point in his life, but he hoped that some of Hank’s cool would rub off on him.

Say, how about an impromptu Take Your Son to Work Day?

At the offices, Rath lets Hank know that he got a phone call from Charlie, telling him that Hank was in a car accident.  Rath offers Levon a job since he promoted a production assistant to writer’s assistant after having to clean up Goldie’s puke.

Charlie arrives and tries to make small talk with Levon, but they are both soon distracted by the sight of Melanie’s nice curve.

In fact, Charlie gets so enthused that the blue pill works its magic that he starts getting a stiffy.  However, his heart rate also increases and he heads for the ground.  Melanie asks if there’s anything he can do, but no.  Charlie’s does it all by himself, and without the use of his hands!

It’s a step in the right direction, at least.

Hank strums the guitar for a bit before receiving a visit from Julia- Levon told her where he lives, as well as the production assistant job.  She’s glad that he ignored what she advised.  She’s just glad to see Levon happy, so she can lower her mother bear defenses.  Julia asks Hank to play something on the guitar, but before he can get stage fright, he gets another unexpected visit.  From Karen this time.  Looks like it’s time to meet the other mother.

This episode focused on the importance of maintaining bonds, whether personal or professional.  Hank at work gave a glimpse into what it’s like to deal with people you absolutely cannot deal with.  The coworkers don’t come off as evil or spiteful, though Terry seems to have a bone to pick with Hank.  Rather, they all seem very self-centered and oblivious to the needs of others.  Whether obsessing over specific food or taking pictures with lunch to upload to your Instagram, these are the kinds of behaviors I notice with my generation, which is a shame. 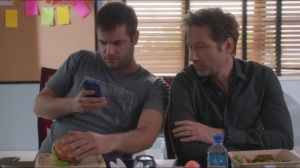 Hank comes off as the straight man, which is probably why he’s the only one who could get Rath to crack a smile in three weeks.  He’s a rebel with a sharp tongue, while the others are way too complacent and into their own lives.  And it’s because he rebels against orders that won him Julia’s respect, but also allowed him to spend time with a man who could use a self-esteem boost.

While I find his scenes with Levon fun to watch, I do hope Hank finds a way to commit both to this and his new job.  The whole point of securing a job was to prove to Karen that he’s grown up and ready to live in the real world without all the sex, drugs and fun being constants.  Backing out of the job would be a setback, but at the same time, Hank made it clear that he didn’t like the script for Santa Monica Cop and the coworkers certainly don’t give him any hope that remaining is worthwhile.  But since he secured Levon a job, I think it’s guaranteed that he’ll stick around for awhile. 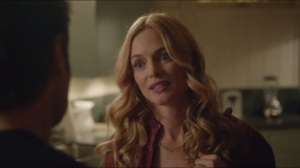 I’m also glad that Julia was willing to give Hank a chance after brushing him off.  Her motherly instincts wanted her to protect her son as much as she could, but Levon, much like Hank, defined her, and it worked out for everyone.  I don’t think Julia withheld Levon from Hank out of spite.  He had clearly moved onto Karen, so Julia didn’t have a reason to stay in touch.

Hank has a long list of lovers, both on and off-screen, so it’s not too big of a stretch to believe that one of them would have a child by him.  Good thing this is the last season.  Otherwise, there’d probably be other kids looking to interview Hank for their college newspapers.

And if I could gush about Heather Graham for a moment, this women just embodies sunshine and I’m glad she’s on the show, even if it’s for the final season.

As for Charlie…should have waited to take the Viagra, pal.  But hey, at least it worked.  Now he just needs to direct his excitement toward Marcy and all is well.

And while Karen may be happy with Hank’s progress, let’s wait until next week to see how long that happiness lasts.