Being nice when you want to run for President must be an impossible task, if Veep is an indication of anything. This week sees Selina and company trying to stop potential presidential competitors from campaigning and, in typical Veep fashion, just about everything that could go wrong indeed does. 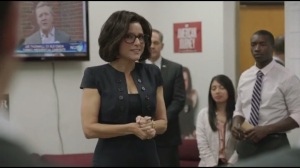 The episode begins in Selina Meyer’s complete and ready-to-run campaign office. The team talks up their beloved presumptive presidential candidate to the interns- Amy and Dan in particular laying it on thick- but another potential candidate grabs their attention. On television is ex-Major League Baseball coach Joe Thornhill, who announces that he is also running for President of the United States.

Selina, after rallying the troops, speaks with Ben, who reminds her of the planned luncheon with Bill Ericsson. Ben advises her to not tell Amy or Dan know since they’re both competing for the campaign manager position. 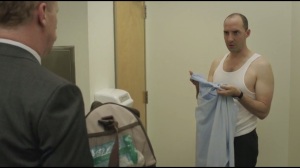 In the men’s room, Gary is airing out his shirt when Mike emerges from a stall with a bag. Inside the bag are his troops. He and Wendy are trying to have a baby, so he’s taking his sperm to a doctor so he can begin the assault on Egg Mountain. 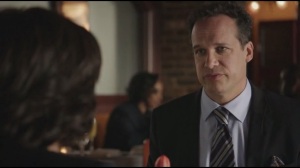 At a restaurant, Selina finally meets with Bill Ericsson, played by the man himself, Diedrich Bader. Ericsson lets her know right off the bat that it’s bad to talk about running for President before securing a campaign manager. As Vice President, Selina is only three yards ahead of her competition when she should be three miles ahead of them. The reason? Team Selina. Well, of course. Ericsson advises her- all while also interrupting her-to dump Amy, Dan and Mike. Oh, and Gary, too. Even though Gary is pretty much Selina’s asshole, it’s time for her to get a better one. It’s a big thing to ask for, dumping your entire staff, but Ericsson, in return, promises to maximize her chances of becoming the most powerful person in the country. Sounds like a good deal.

Back at the campaign office, word spreads that Jonah has been hired by Maddox, who wants Selina to meet him at his country home. Selina wants Mike to attend but, without giving his reason, turns it down, so even though she doesn’t want to pick between him and Amy, Dan it is. 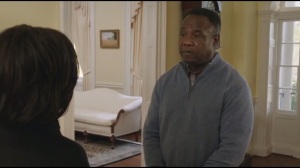 Selina asks Gary in private if she’s ruthless. You know, can she be a complete bitch? Gary isn’t a fan of Selina talking about herself that way, or his arm, but to change the subject, he discusses Mike’s happy jack antics back at the office. Selina decides to give him a call. 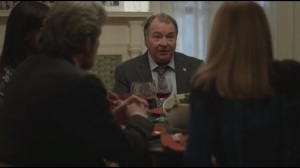 Amy, meanwhile, invites Kent, Sue, Mike and Ben to her home for dinner with the obvious motive that she wants them to back her as a potential campaign manager.

When Mike returns from the bathroom, Ben, through his own brand of humor, tells Mike that he knows about his escapades. Mike admits it, much to the surprise of everyone else who didn’t know, as Mike had believed. To change the subject, Amy decides they should all talk about something besides work.

There’s an awkward silence. Sheesh, these people are really tied down by their jobs. Amy breaks the ice by telling everyone there that she really appreciates them. They eventually do get to talking and land on Jonah who, as Ed tells them, is the nephew of Jeff Kane. Kane is responsible for the senior vote in New Hampshire.

With this information, Amy orders everyone out of the house so she can call Selina and let her know. She even wants Ed out of the room even though it’s their anniversary. Why? Because he went a full year without telling her about Jeff Kane. Yeah, Ed! Get your priorities together!

So Dan tries to be nice to Jonah, but it goes nowhere. 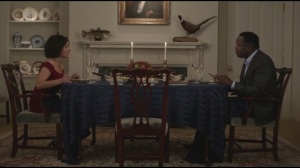 Maddox and Meyer finally talk one on one, with Maddox refusing to step aside so Selina can run. Meyer talks up the power of the Vice President, but Maddox counters that she used her powers very selectively. They both believe that the other should be their running mate. Neither of them will have that, particularly Selina, who would rather be shot in the face than be Vice President again. 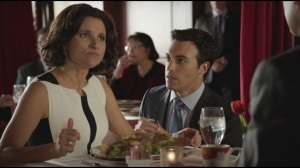 That worked. The next day, after Maddox has officially announced, Meyer meets with Ericsson again. Oh, so is Dan, after putting some pressure on Sue. I honestly have no idea how he put pressure on Sue, of all people, but whatever, Dan’s there, too. Ericsson tells Selina that he can’t be her campaign manager because he’s accepted an offer by Thornhill. Though Thornhill may have no chance, voters love an underdog story.

Dan and Selina are silent on the ride back until Selina, with nowhere else to go, flat out asks Dan if he wants the campaign manager position. 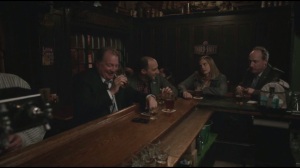 At a bar that evening, the rest of Team Selina drinks away and prepares to drink even more when they receive word that Dan has been named campaign manager.

Since he will manage the campaign, Dan figures that he and Selina will develop a close, intimate relationship. As such, they should air out any dirty laundry. Dan goes first: when he was young, his friends dared him to kill a stray dog, and he did. Selina’s secret? Before she and Andrew split up, Andrew’s car caught fire…courtesy of Selina. It’s the start of a beautiful relationship.

Being nice must be one of the worst things ever when you’re a politician. Whether having to put on a happy face to the worker ants or other politicians you despite, posing with someone who has a knife in your back or breaking bread with someone you’re about to fire, politicians enjoy lying through their teeth, and Veep is no exception. What began with nice intentions devolved into arguments galore when Selina refused to be Vice President again.

Courting is hard. You want to say the right things to the people you need on your side, but you don’t want to offend them or come off as desperate. The more you want something, the more forceful you’ll come off in your approach, until it reeks of desperation. 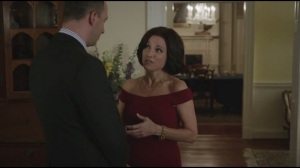 For many aspiring politicians, the Presidency is the fabled prize. You don’t want to just stay as a State Representative forever. You’ll want to move up to Speaker. Then you’ll look at Congress. Soon after, the Presidency sounds very enticing. As we see, few are comfortable where they are. There’s a lot of anger in what Selina said about not wanting to be Vice President again. As VP, she’s taken a lot of the President’s crap and had to clean up his messes. To her, this is her time to shine. She’s mostly been the punching bag and prop of the administration.

But being nice just is not this group’s strong point. They’re far too vain and self absorbed to give enough time to other matters. It’s amazing that they’ve been able to accomplish…whatever it is they’ve accomplished together all this time. If Selina’s team behaved more like Ben and Kent, chances are they’d get more things done. 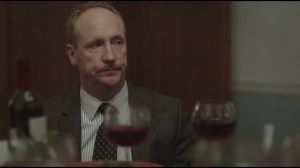 I liked the subplot with Mike not just because of the humor at his expense, but it’s a chance to see his life outside of working with Selina. Both this and the honeymoon with Wendy show that he does have a life to live that doesn’t involve politics. He feels more grounded than the others, but only because we’re allowed to see more of his home life. 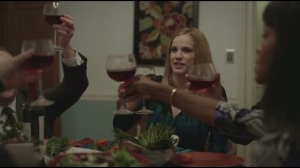 Amy’s dinner scene is indicative of the fact that these people are defined by their political lives. I question what they did before working these gigs. The silence during the dinner scene was just uncomfortable, almost like when everyone had to give up their cell phones during Mike and Wendy’s wedding. Amy herself is completely vain, but hey, at least she acknowledges that she can’t be nice to people. Given how much she’s on her phone and blaming someone else for things that go wrong, it’s no big surprise. 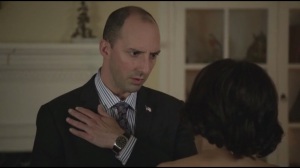 And poor Gary, again. Again, I like the continuing thread the writers have done with him thus far and focusing on his shoulder hurting. He’s been Selina’s right hand man for so long, it’s remarkable his arm hasn’t fallen off by now. You gotta feel bad for Tony Hale, though. I mean, in Arrested Development, his character eventually lost a hand. And now here, his character is in danger of losing an arm. He just can’t win. 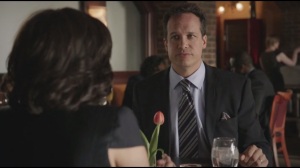 I liked Ericsson and the points he made about Selina needing to dump a completely incompetent crew. I do hope we see more of him. Given how prominent Diedrich Bader was featured in the trailers and the mention of him during the season premiere, I would like to see more of Bader on the show. It feels like a waste to build him up and then just drop him as soon as he appears. 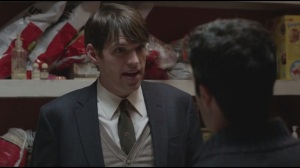 And while Jonah may not be happy as a bag man, I’m sure he is glad to know how much Selina now sees him as integral to New Hampshire.

“Fishing” showed the challenges of courting and how a little bit of sincerity and kindness go much longer than trying to cram years of kindness into a single night. We see how politicians want to clear the field for themselves because they feel it’s their destiny this time as opposed to any other time. Remember how the Republican Party wanted every faction to rally behind businessman Mitt Romney even though there was clear division? Remember how now Democrats want Hillary Clinton to be the only nominee for 2016, claiming that it’s her time and she’s the most qualified? Yeah, Veep again does a good job at holding a mirror up to our own political process and showing the cracks. It will be interesting to see how Dan’s promotion shakes up the team once they reconvene next week.

Look, the political game is dirty. Sometimes it means having to get your hands deep in the mud and fling dirt at anyone who wishes to challenge you. Just look at attack ads and the partisan hackery that has worsened the sickness that is our political process. Getting dirty will have an effect on the campaign, so I’m sure we should expect something similar from Meyer during the campaign.   And with Thornhill thrown in as a curveball, we’ll see if voters will go with someone they know or root for the unknown underdog.