“All my orgasms have come at once.”

And like that, we’re back to Veep! And I must ask: if Selina becomes President of the United States of HBO, does the name of the show become P? Or POTUS?

I’ll admit that I didn’t get around to watching Veep when it first debuted because my focus was on other programs. Now, having had the time to sit down and play catch-up, I’m in agreement with the positive buzz I’ve heard regarding the show. Whether it’s how well the cast plays off of each other or how inept politics are portrayed- and in a sense, actually are- Veep is a comedy worth watching, but chances are, you already knew that.

So Season 2 ended with Selina and her team learning that the President would not seek another term, opening the door for her to run.

The season picks up two months after the previous one with Selina in Iowa on a book tour to promote her new title: “Some New Beginnings: Our Next American Journey.” At a book signing, she fluffs both locals and potential caucus goers, including telling people that her book’s title is not a Star Wars reference or being given a giant slab of butter in the shape of Iowa. As her staff is unable to attend, accompanying Selina on this journey is Richard, played by Sam Richardson.

Because the rest of the staff is still in D.C. for Mike’s wedding. Gary is freaking out since Selina’s never been away from the group for so long, Mike is giddy with excitement, and both Dan and Amy wonder which of them will be hired as Selina’s campaign manager. They also wonder what’s taking the President so long, as it’s been a whole two months and he’s still been quiet on his announcement.

A more potentially pressing announcement is afoot, though, as Amy learns of a rumor that the West Wing is abuzz with news that Defense Secretary Maddox will be making a statement soon.

However, turns out that Mike’s fiancé, Wendy, played by Kathy Najimy, would- as most people on their wedding day probably do- like as much focus on the ceremony as possible. So much, in fact, that she has everyone turn in their phones. If it wasn’t already clear, people in this day and age can’t exist without their mobile devices, so to have the Vice President’s staff turn over their phones is…well, I’d say it’s like asking them to give up breathing, but as we’ll find out soon, they find ways to manage. 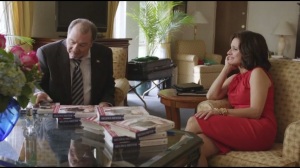 Back in Iowa, Selina leaves the book signing for a bit to head to her hotel room. Signing books can only be entertaining for so long. Makes you wonder how any of our current real life politicians, past or present, are able to stomach this sort of thing. She tries to call Gary, just as he’s reading the wedding vows, so he does the polite thing and wraps up the vows as soon as possible just before texting and walking off. Ben pays a visit, as he was on the way to Congressman Rick Cowgill’s funeral. When Gary finally responds, Selina ignores the call. Huh. 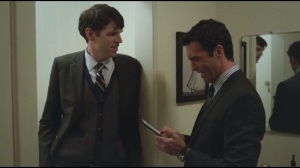 At the wedding, an uninvited Jonah bursts into the bathroom just as Dan is about to leave. Jonah lives down the street from Pam “Pentagon” Kendall and when her car broke down on the way to the wedding, Jonah, in a show of absolute selflessness, offered to give her a lift. She hasn’t, to Dan’s dismay, given him any intel on the Maddox announcement. But if Jonah wants to know, he’ll learn through WestWingMan.net, the hottest gossip site in D.C. Most of the stories are pretty dull, but if something juicy arrives, the West Wing Man will have it.

Selina and Ben pass the time by signing books that she didn’t even in write: politics in a nut sack, really. We even learn about some of the alternate subtitles proposed to Selina: Red, White and Yellow or Hands of Our Children. Riveting. As tiring as all this is, if Selina’s serious about running for President, she has to endure 18 more months of this. Not exactly the most exciting job.

Ben doesn’t see it as that much time, though. When Selina asks him to help her choose between Dan or Amy as a potential campaign manager, he picks neither and settles on one Bill Ericsson, a very proven manager. He’s available and will be at Cowgill’s funeral, so perfect time to meet, greet and grieve.

No grieving at the wedding, though, but Amy picks up some juicy information via an extra phone hidden somewhere in her dress. Maddox is going to resign, so you know what this means? Everyone gets to use their cell phones for five minutes!

As the veep team goes into crisis mode, Jonah snaps a quick photo and uploads it to his website.

At the White House, though, Kent tries to convince everyone that they are not, in fact, in a crisis. Everyone ought to stop running around, then. 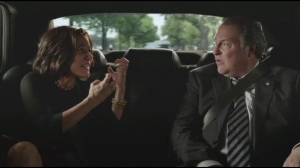 En route to the funeral, Selina lets Dan know that something needs to be done if there’s a possibility that Maddox may run for president. Dan gets right on it by letting Jonah know that many will find a connection between the photo he took of the VP’s team freaking out and Maddox suddenly stepping down, as he could be a big rival for Selina.

At St. Aloysius Church, Selina runs into Blake Stewart, played by Kevin O’Rourke. Gary- via video calling- recognizes Stewart as the man who won the presidential nomination a decade ago, but then lost disastrously. He will definitely throw off her game. Blake talks about his failed run and how he thought his team failed him, but realized it was him all along. 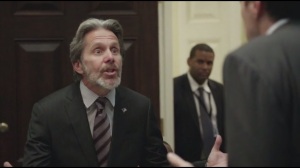 Over in D.C., Kent demands Jonah’s White House pass. He’s done. Out. He knows all about WestWingMan.net. The photo that Jonah posted roused the suspicion of the press. Deleting the photo only made it worse. It’s now impossible for the White House to remain silent on the President’s secret, so he will be making his announcement today. The team heads out to alert the major news networks, though Kent advises them to not interrupt any major sporting event. Unless it’s golf, anyway.

Ben tells Selina that Ericsson has already bolted back to D.C. after hearing about Maddox. When it’s Selina’s turn to head to the altar to say a few words, she speaks of Cowgill as if he were a close confidant. The crowd loves it.

After this, Selina learns that Maddox canceled his statement because the President has his own to make. Dan calls and tries to break the good news to Selina, but since she already knows, there’s no breaking news to break. Dan makes the decision to ask Selina about whether she’ll take him on as campaign manager, but Selina cuts the call short. Sorry, Dan.

This is a great start to the season and recaptures the humor that makes Veep so much fun to watch. We’re still in the early stages of Selina’s run for President, but one thing I’ve enjoyed about Veep is how much it takes our political process and turns it on its head. House of Cards plays it straight. Scandal, though I’ve never watched it, I assume does the same. Veep is about skewering this and it continues this tradition with Selina having to sign books and mingle with the odd assortment of folks in Iowa.

Whether it’s the aforementioned fan who asked about a reference to A New Hope, the woman who asked Selina about her favorite word or Selina just mentioning that blind people are people too, there was no shortage of quotable lines either from Selina’s end or at the wedding. And I have to wonder how real life politicians can even stomach having to pander to every single type of potential caucus-goer just to garner their vote and support. When Selina and Ben talk about politicians signing books that weren’t written by them, I got flashes of the political book section at a Barnes & Noble near my job.

As for the wedding, it is insane just how these folks can’t go even a few seconds without whipping out their mobile devices and checking for updates. It’s a humorous little poke at how society is so reliant on technology. Many a day, whether going to or from work, do I see so many folks on the train just texting or reading away, only making a move to let on incoming passengers and never letting go of their mobile devices. And where in the heck in her dress did Amy keep that phone, anyway? Strapped to her leg? Strapped further up? Further up?

For Jonah to lose his job is just a temporary speed bump for him. This is Jonah. Of course he’ll find some way to remain a part of the political inner circle, maybe just without his blog. Timothy Simmons, as always, is great in the role and he had a couple of great lines this week, such as telling two women at the wedding that they’re like Easter eggs he’d like to crack open or calling himself a sex wasp ready to go after women at weddings who are like ripe fruit, ready to drop.

As far as Selina’s decision to run goes, the way Ben suggests that she take on this Bill Ericsson man for her campaign manager may mean she’ll rely less and less on her own team. I mean, let’s face it, collectively, they aren’t all that good at their job. They’re fun to watch, to be sure, but they also suck. But we’ll see what Selina decides to do.

And poor Richard. He will just never be Gary.

Veep returned without missing a beat and “Some New Beginnings” was a strong way to start the season. There’s a lot in play here with Selina mulling a presidential run, Dan and Amy fighting for the campaign manager position, Jonah out of a job, mixing with potential voters and all the fun stuff that make politics so messy and entertaining to watch. Unless it’s House and Senate business on C-SPAN or C-SPAN 2. Glad the show’s back and as funny as it always has been. I’m looking forward to the rest of the season.