“He has a special signal he shines in the sky.  It’s in the shape of a giant cock.” 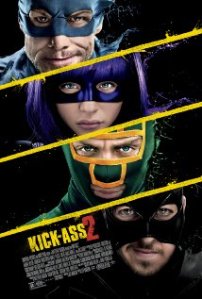 Kick-Ass 2 Into Darkness is the superhero action comedy follow-up to 2010’s Kick-Ass and picks up sometime after the events of the first film. Aaron Johnson, Chloe Grace Moretz and Christopher Mintz-Plasse are back to don their masks again with some more folks joining their ranks as they pick sides.

Through Kick-Ass, Dave Lizewski has inspired average citizens to become costumed heroes.  As a result, he rejoins the cause and receives training from Mindy Macready, better known as Hit Girl.  Mindy, meanwhile, now lives under the guardianship of Sergeant Marcus Williams, played by Morris Chestnut, and struggles to maintain the balance between a normal and her superhero life now that Big Daddy is no longer a part of her life.  Chris D’Amico- Red Mist- also struggles, but now to find his place in his family and establish himself as his own man since his father was killed in the last film.

When Hit Girl is forced to promise Sergeant Williams that she will be Hit Girl no more and focus on being a normal girl, she hangs up her wig and Kick-Ass finds solace in a group of vigilantes known as “Justice Forever,” led by Colonel Stars and Stripes, played by Jim Carrey.  On the other side, Chris becomes the world’s first supervillain, calling himself “The Motherfucker” and recruits his very own legion of doom…I mean supervillains.

Kick-Ass, both the comic and first film, is an interesting concept for a general audience.  Place a literally nobody in grounded reality, put them in a spandex costume, create a back story and see how they fare when trying to fight crime.  The first film had a relatively small cast focus on and a contained story that had full-fledged moments of action, but countered that with slow moments to allow the characters to interact and grow.

I’ll say now that Kick-Ass 2 is a very fun movie to watch, not just based on the reactions from the audience that I sat in while watching the film.  A lot of the new characters are well cast and the returning actors seem to have grown into their roles and are having more fun with them.  Now that this universe has been established, let’s have some fun with it, shall we?  The fight scenes are still over the top and enjoyable, though the special effects are a bit noticeable this time around, and the dark humor, much of it coming from “The Motherfucker” himself, is still here, though the film does unnecessarily dive into some gross out jokes.

Director and writer Jeff Wadlow’s filming and editing pale in comparison to the pace at which co-producer Matthew Vaughn, who directed the first film, had with Kick-Ass.  As such, the film moves at a breakneck pace where the audience is not given enough time to process what just happened.  In addition, the slower moments of character development and interaction from the first film seem to be sacrificed for more comedic elements, almost if many character moments are missing or were left on the cutting room floor.

For comparison’s sake, there are two scenes in the original Kick-Ass that come to mind: Big Daddy training Hit Girl to take a bullet and the following scene where she tells Big Daddy that she wants a dog for her birthday, only for her to admit that she’s just screwing with him.  Those are two moments where the film slows down and lets the characters just be characters.  And there was such a genuine rapport between Nicolas Cage and Chloe Moretz that I found myself wanting a similar connection between Chestnut and Moretz here, but their interactions feel a bit more adversarial.  The shooting scene is replicated at the start of Kick-Ass 2, but the dynamic between Dave and Mindy isn’t as strong as Mindy’s was with Big Daddy. 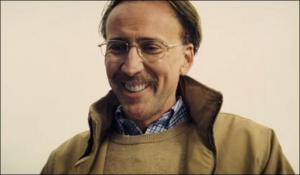 But the point is that the human element is, for the most part, lost.  Part of this has to do with how the film is presented: Kick-Ass 2 is an adaptation of both the comic book of the same name and a Hit-Girl spin off comic that occurs between Kick Ass 1 and 2.  Hit Girl’s subplot in the film where she learns to fit into a school environment and make friends with the girls is based off of her time in the spin-off, as is Chris’ storyline about how he goes through ninja training and his transformation into “The Motherfucker.”  Much of both of those plots is condensed into short scenes and we’re to believe that such big changes for the characters are handled in a few scenes.

To emphasize what I mean, let’s examine Mindy’s payback to the uptight rich girls after their endless taunting. 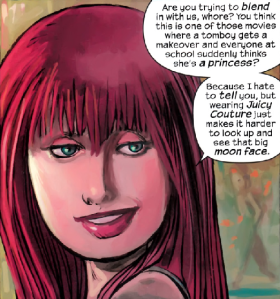 In the comics, Mindy dangles the ringleader, Debbie Foreman, over a roof and then drops her into a garbage truck.  She then threatens to repeat the drop another day before the truck arrives unless Debbie cuts the crap.  Debbie complies.  In the film, ringleader Brooke and her sidekicks are humiliated publicly when Mindy uses a device on them that induces both vomiting and diarrhea.  I wish I could say I made that up, but I’m not.

This is an example of the gross-out humor that I’m not too fond of.  Yes, it got a chuckle, but for my money, it feels very out of character for Mindy to do something this juvenile.  Mindy is more cold and calculating than that.  When she wants to, she can and will go for the jugular.  No need for spectacle, just made her point while making her enemies fear her.  The movie’s revenge feels much more like a ‘Gotcha’ prank as opposed to Mindy using her superhero smarts, though I suppose not just anyone has access to a device like the one she used.  Also, the slowly rising music that plays in the background of this scene tips you off to the fact that Mindy already has a plan to get back at the girls.  I know I’m pulling too much from what I know about these characters in the comics and not just taking this as a movie, but the first film established how brutal Mindy can be, and I was surprised to see the sequel give her a gross-out revenge scene.

Condensing both the Hit Girl and Kick-Ass 2 comics into one movie was a gutsy move, but it makes this film too compacted.  I’d like to have seen Hit Girl get a spin off movie before Kick-Ass 2 and delegate the other characters to the background, but use them when necessary.  Chloe Moretz’s performance in the first Kick-Ass alone proved that she can hold her own with older actors.  As the main protagonist, I can’t say.  Though, given the enjoyment factor I witnessed in the cinema while watching the film, it’s clear that, for some at least, the film’s pacing did not deter from people having a good time.

On this, I have to wonder whether I’d enjoy comic book movies more if I was not a fan of them and had not read the original source material prior to seeing these films.  If I just walked into these films blind, it’d be interesting to know whether I’d have a better time rather than drawing comparisons from comic to movie.

I’m not trying to rail Kick-Ass 2 over the coals.  It’s still a good movie and a lot has to do with casting.  While I don’t think Dave and Mindy’s student/teacher is as strong as it could have been, their friendship is believable and I have no problem buying that these two have a connection.  Mintz-Plasse as “The Motherfucker” was a treat to watch as he struggles to be taken seriously as a supervillain.  The henchman, Javier, is a good counterbalance to Chris’ rage and I must mention that John Leguizamo is fantastic as Javier.  Now this is a relationship I’d like to have seen develop because their moments together are some of the funniest in the film.  Javier is the straight man to Chris’ “Motherfucker” and they bounce off of each other well.  Problem is Javier is not in the movie long enough to let that friendship grow. 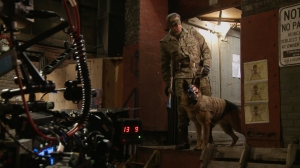 Equally underused, yet still great performance nonetheless is Jim Carrey as Colonel Stars and Stripes.  No mugging for the camera or sound effects here- Carrey really does disappear into the role and it’s strange to see him playing this type of character, but I buy it because he gives a convincing performance.  He comes off as a man who knows how to lead a team and just wants to make the streets a better place.  I don’t hold anything against him for condoning the violence in the film.  It took nothing away from his work.  The rest of Justice Forever is well cast and they aren’t forced into scenes for the sake of having the heroes on screen at the same time.

Strangely enough, the side characters that aren’t utilized to full effects are Dave’s friends.  Clark Duke has more to do, admittedly since he’s a member of Justice Forever, but the rest are only around for a few scenes.  It’s interesting to note that Dave’s other male friend, Todd, has actually been recast.  I never would have noticed that, but what’s even stranger is that Lyndsy Fonseca reprises her role as Katie Deauxma from the first film, but after a simple misunderstanding, she’s completely forgotten about.  It’s as if this movie forgot all the effort Dave took to get this girl to like him in the first movie, now that’s all for naught.  It was not the right way to handle that relationship.  Or maybe it was this film’s contrived way of freeing Dave up so he can later hook up with Night Bitch.  You decide.

In addition to what feel like rushed choices, the film’s plot suffers from predictability.  Most of the characters who kick the bucket, you can see it coming a mile away.  And the deaths or attacks that we’re supposed to grieve over, we don’t get that opportunity to breathe because we have to move to the next action scene.  The comic had this issue as well, but I had hoped that there’d be more liberties taken with pacing the film.  Less is more here.  Let both the characters and audience soak in the magnitude of a scene before moving on.  Though one of the bigger scene changes ends up being used for comedic effect and given the severity of the original scene, I can’t say I blame those involved for making that decision.  Heck, the new scene is quite funny and shows how a gruesome scene can be turned into something humorous when done right.

Kick-Ass 2 does not require seeing the previous film to understand what’s going on or to have a good time.  The cast settles into their roles quite well and the growth of superheroes show what happens when normal people are inspired to do good.  This also shows what happens when those with ulterior motives decide to do evil.  Like the first film, it examines the superhero archetype, turns it on its side and holds it up to a cracked mirror.  And as with the first, this is no movie to take your kids to see.  Remember, one of your main characters is still a young girl who knows her way around bladed weapons and probably swears more than most adults.

The memorable performances and fight scenes do not overshadow the film’s pacing issues and lack of solid character development, but will you have a fun time watching Kick-Ass 2? I would say yes.