Could this be the beginning of the end for Mr. Rick Grimes? 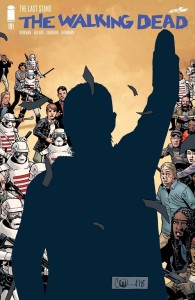 Issue #191 of The Walking Dead has already left a hell of an impression on readers. You already know how it ends, so no need to dwell on that. We will get to that moment soon enough. As for what we have now, it is indeed still a solid read with an interesting twist at the end, but the execution itself is a bit flimsy, if not just outright bad. But I’m getting ahead of myself. Let’s take a look at “The Last Stand.”

So as expected, the standoff from the end of issue #190 ended in no bloodshed. Despite Pamela’s order for the guards to open fire, they instead stand down. After all, if there was going to be a firefight, we probably would’ve just gotten it last issue. Still, it was a nice way to string readers along and prepare them for what could’ve been a brutal showdown. But we still have a showdown here.

Rick and Mercer believe that things can change, and it looks like they may be able to bring the public to their side. Not everyone since some are still loyal to Pamela, but the tide is turning.

Quicker than Pamela would like, I’m sure. Rick wants to work things out diplomatically, but it’s hard to do that when Pamela has accused him of attempting to start an insurrection. Of course, he’s attempting no such thing, but his way of thinking is catching on with the Commonwealth citizens. As far as Rick is concerned, he’s being reasonable compared to Pamela, who is slowly becoming unhinged.

Rick knows that fighting would result in deaths on both sides, but he doesn’t want that because he loves the Commonwealth. He’d do anything to protect it, just as he would if this was Alexandria. 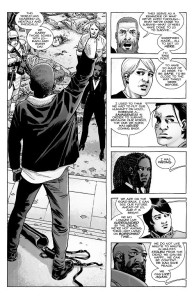 But all the fear and anger threaten to rip apart the fabric of society just when the world is on the verge of returning to what it used to be. You know, a time when people didn’t have to kill to survive. Rick has a great speech here that mirrors a similar speech he gave in issue #24. While back then, he said that society was on borrowed time, now he sees things differently.

Yes, the world has scarred and molded him and so many others. They’ll carry those scars and horrific moments for the rest of their lives. There’s no arguing what the people have done to make sure they would make it from day to day. While Rick believed that humanity had been put on hold- in particular when you consider the threats he’s faced- developments over time have shown that society can return to normalcy.

Before, it was about embracing your savage side. Now, though, they are not The Walking Dead anymore. They don’t have to live by fear. The moment above is even framed and drawn similarly to how Rick delivered his speech in issue #24. It’s a good callback and feels like the natural evolution of where Rick’s arc has taken him since issue #24.

The world is a gift, even after all the pain it has caused Rick…and all the pain he’s caused other people, no doubt. With everything that has happened, especially since the time skip after the war with the Saviors, the world looks bright on the horizon. They’ve worked far too hard to go back to the way things were, but more than that, they have to respect each other.

So what does this have to do with Pamela? Well, as was established when the two first met, Rick sees Pamela as someone who clings to the old ways, where the few outrank and overpower the many. Rick may have tried to change her way of thinking, but he’s past that point. He admits that he was wrong to back her, but he can’t just strip her of her title, even if she craves power.

So instead, he turns to the people of the Commonwealth and implores them to make their voices heard. Do they want or deserve Pamela as their leader? The answer is a resounding ‘NO!’ So Rick tells the people to take charge and don’t let Pamela be their leader.

In a way, we do still sort of get an uprising, but from the people themselves. Yes, Rick led the charge, but it’s the people who ultimately decided that they no longer wanted Pamela as their leader.

So for her own safety, Rick and Mercer to have Pamela detained. Not that she’s a threat to anyone else, but probably more to keep the public from turning on her. They just made it known that they do not want Pamela as their leader anymore. If she’s turned over to the people, they’ll rip her to shreds. Same with Sebastian, who is rightly told by Pamela to shut the fuck up.

Sebastian himself is a powder keg waiting to explode. He doesn’t even offer to help that much when the rebuilding starts, but just you wait. We’ll get to Sebastian in a moment.

Pamela isn’t exactly going to be locked away for the rest of her life anyway. Rick pays her a visit to reiterate that this was for her safety. Plus, it’s nice that he at least apologizes for what happened. Still, Pamela brought an army, which would’ve resulted in bloodshed and, as Rick puts it, slaughter of her own people. Strong words, I’m sure.

But Pamela acknowledges that she got carried away. She has this need to be in control and felt that she was saving people by being in charge. Perhaps she and Negan should have a conversation. Still, Rick admits that he’s also made mistakes, and like that, he lets Pamela out of her cell. Again, this was never going to be permanent, but at the very least, as Mercer explains, guards will be watching her. 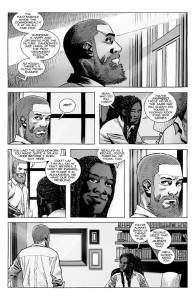 For now, Rick is feeling in a good mood. Quite optimistic, even. But you and I know how dangerous optimism can be. Either way, Rick and Michonne discuss the upcoming election. The people feel better now that Pamela is no longer calling the shots, but they do still need someone to lead. Rick would seem like an ideal and obvious choice, but he’s got his own community to lead.

There’s always Michonne. She’s got a connection to the Commonwealth already since Elodie is there, but Michonne believes Rick should lead. He’s given the people things worth living for, and it’s been established before that some citizens even expressed interest in moving to Alexandria. Rick’s leadership style has caught on with the locals. 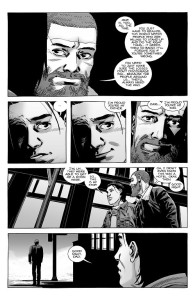 More optimism. Later that evening, Rick has a heart-to-heart with Carl, with him telling his son that he’s not going to run for Governor. The Commonwealth needs a leader from within, so hopefully someone who lives there will step up. Rick’s plate is full enough as it is.

I like this conversation because it’s been awhile since Carl and Rick had a nice, long conversation. We see how much Carl admires his father, saying that he must be able to predict the future since he always knows what will happen. But Rick just has hunches, no more than anyone else. Like anyone else, he can and has been proven wrong, but he tells his son that he can’t be discouraged by losses.

It’s impossible to say if this is the last conversation that the two have, but when Rick and Carl talk about how proud they are of each other, there’s a real sense of finality here. Now maybe it’s just because the two haven’t had much time to talk that this feels like such a touching moment. But the reason it feels like a final conversation between the two is because of what happens next. 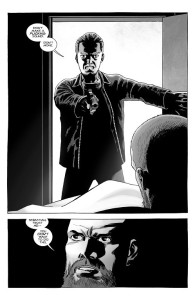 Let’s come back to Sebastian. The kid who made a terrible first impression when we first met him and has continued to be an obnoxious little shit ever since. He’s upset that this random guy from another community got his mother locked up, so now he’s out for revenge. First off, you’d think that Rick would have some guards of his own. He’s had his life put in danger many times.

Combined with the uneasiness in the community- even with the rebuilding- and it’s not hard to imagine that someone would want to try and attack Rick. For that, you should have someone guarding him. Given how well Rick’s message has resonated with the people, I imagine someone would be willing to protect him.

No dice, though. Rick Grimes gets shot. By Sebastian of all people. Looking at this image, it looks like Sebastian managed to nail him in the heart, or at least very close to it. So is this a fatal blow? Hard to tell, but Rick looks as shocked as you and I probably were.

Plus, it’s immediately after it happens that Sebastian realizes just what he’s done. While Sebastian was ranting and raving about the possibility of him and his mother being kicked out, Rick remained calm. Sebastian only felt in control of the situation because he had a gun. It gave him power. When he fired, he saw what that power would do and you see that he regrets it.

Sebastian didn’t want the order of things being disrupted. Given his status in the Commonwealth, of course he would think that. Even so, this could have been avoided. As it stands right now, though, who can say?

But at this moment, Rick is bleeding quickly from what looks like a potentially fatal injury. I will ask again, could we be headed towards the end of the line for Mr. Rick Grimes? It’s bad enough that Rick has already left The Walking Dead series on AMC, but could this be his end in the comics?

Now to be clear, I don’t think anyone would be upset if Robert Kirkman did decide that Rick would die. The problem, I feel, is in its execution. If this is the end, then Rick didn’t die while fighting or protecting someone. It happened because this little shit Sebastian snuck on him and fired. It’s not the most satisfying potential exit for Rick Grimes, I’ll say that much.

Perhaps I’m wrong. Maybe Rick’s plot armor will pull through and he’ll live to fight another day. But I also thought that Andrea would survive her ordeal and keep going. Obviously I was wrong. What will happen to Rick, though? We’ll have to wait and find out when we return for issue #192. See you then.