Time to see how far Mercer’s insurrection can really go. 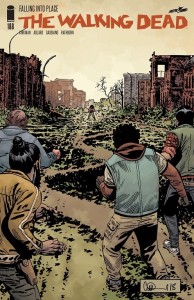 Dwight’s death may have just increased the amount of tension already brewing in the Commonwealth. Between that and Mercer’s plan to overthrow the current rule, you can see how another powder keg is ready to explode. Rick Grimes won’t be enough to stop this incoming insurrection. But let’s dive into issue #187: “Falling Into Place.” 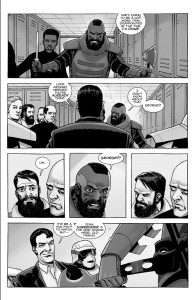 Actually, things don’t fall into place at all for Mercer. Despite wanting to overthrow the current rule in the Commonwealth, he doesn’t get help from any of the other guards. With Lance right there, I can’t say that I blame them, though I imagine that many of them feel the same way as Mercer. It’d be like badmouthing your superior or someone higher-up on the totem pole, but you freeze when they come your way.

Not to say that the guards couldn’t have taken Lance. I imagine they would be less hesitant about him versus Pamela, but still, Lance is in a very high position of power. Any and all bravado vanishes in an instant. In addition, Mercer just sprung this plan on the guards. They haven’t had much, if any, time to digest this supposed insurrection. So when Lance shows up, of course they may not be willing to back Mercer.

It certainly flies in the face of what I assumed would happen, which is that the guards would just jump and kill Lance. But then again, that would probably lead to worse repercussions. Dwight’s death is still recent. Killing Lance and then attempting to hide it would not go unnoticed, so there goes that theory. 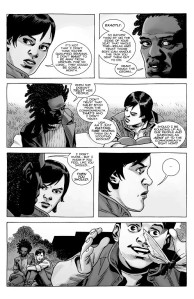 But let’s jump over to the Hilltop for a bit. While watching Hershel, Maggie tells another Hilltop resident, Brianna, about her concern. More like a bit of regret, because while she doesn’t trust Pamela Milton at all, she feels that she should have joined Dante and the others on their journey to the Commonwealth.

As much as I would love to see Maggie in action with the others, I wouldn’t want her to leave the Hilltop completely defenseless, either. Jesus, Aaron, Dante, and Carl are already on the road. You need to have somebody left to keep things running. Could Maggie have gone with the others and left the Hilltop in someone else’s capable hands? Very possibly, but I don’t think it would’ve been necessary.

You’ve already got Rick and Michonne there. The other group is on the way. At that point, you don’t need to overdo it. Yes, at some point, I do want Maggie to see the Commonwealth for herself, but for right now, there’s no need. Plus, sending an army, as Maggie suggests, probably would’ve been overkill. A good show of force, but overkill. 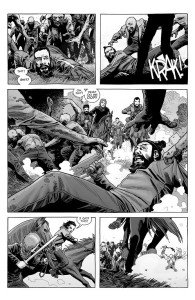 But speaking of the group at the Commonwealth, the group of Siddiq, Aaron, Jesus, Dante, and Carl have arrived and found Princess, who gives them the slip. This leads to a chase where the guys run into some roamers. Though Jesus almost bites the big one, Carl manages to save him. Well, at least this version of Jesus gets to live to fight another day. TV show jokes aside, it’s a nice little action sequence. 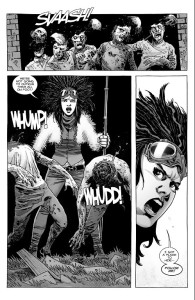 Ultimately, though, Princess does come out of hiding, all while hacking down some roamers in some very good artwork from Charlie Adlard. She motions for the others to follow her, but obviously they can’t all go. They won’t get rid of the roamers that way. So Jesus and Carl head to Princess’ hiding spot while Aaron, Siddiq, and Dante continue to lead the roamers away from their location. 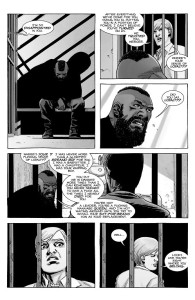 But what about Mercer? Well, Pamela pays him a visit and asks where his sense of loyalty went. That was the wrong question, Governor Milton. Mercer lays into Pamela, saying that he’s been nothing but a glorified errand boy. Ever since we first met Sebastian, we’ve seen how much Mercer has had to endure from him. If Sebastian is next in line to replace Pamela, then Mercer won’t wait for that to happen.

Given how shitty of a person Sebastian is, I don’t blame Mercer for chewing out Pamela in the way that he did. It doesn’t help his situation at all, but at least now Pamela knows what Mercer really thinks of her. You can count on her to find another guard to keep an eye on Sebastian going forward. Though if Sebastian got himself killed or bitten, it wouldn’t be the biggest loss. 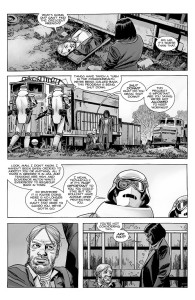 We get a brief scene at the rail yard where Eugene and Stephanie learn from the guards that everyone is wanted back in town due to recent events. That, by extension, means that the rail project is temporarily shut down and no longer a priority. Big blow for Eugene, but the good thing is that he doesn’t have to stop working. As Eugene is told, he can keep working on the project all he wants.

He just won’t have any protection is all. As you can guess, Eugene opts to continue working, despite the lack of security. Why is this important? We’ll find out later on in the issue. 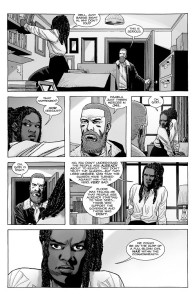 For now, let’s jump over to Rick and Michonne, as Rick updates Michonne on Mercer’s incarceration. Things seem to be going according to how Dwight wanted them after all. At least, that’s how Michonne sees it, since Dwight wanted the people stirred into a frenzy. Even in death, that still happened. But Rick doesn’t see it that way. Not completely.

Yes, that anger and resentment have always been bubbling under the surface, but Rick takes some responsibility, saying that he and his group were the catalyst for much of what has happened. Things could’ve broken down in the Commonwealth even without Rick and company arriving, but they’ve accelerated the process, as far back as Sebastian stirring problems with Elodie and Michonne.

But with Dwight dead, how are things still happening so fast? 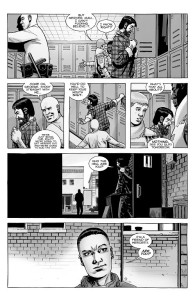 That’s where Laura comes in. She’ll pick up the slack from where Dwight left off, and it looks like she might be able to at least get George on her side.  If anything, Dwight’s death may have emboldened her to try harder and succeed where he ultimately failed. But don’t kill off Laura. I like her. 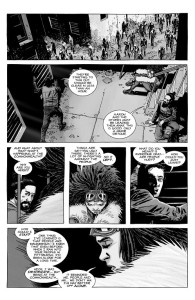 So why was Princess leaving the Commonwealth in the first place? Well, while the others deal with the roamer herd, Princess tells Carl and Jesus that people are dangerous. No shit. She joined up with the group going to the Commonwealth the first time because she’d been alone for so long. In her eyes, she’s better off alone.

Bullshit, says Carl. After all, Princess saved them. She didn’t have to bring them to her hiding spot. Plus, if she really wanted to stay alone, why even join up with the first group in the first place? People are good, and Carl believes that Princess is good, too. I’m glad that, even though Carl doesn’t know Princess as well as others do, he’s the one to snap her out of her funk. 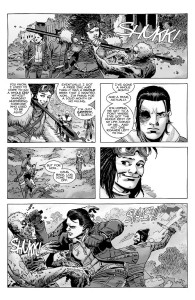 Once more, I just like seeing Carl more involved with the story again. I’ve enjoyed his growth while he’s been at the Hilltop, but it’s great to see him out in the open again, even though, as he points out, it’s been a very long time since he’s had to kill a roamer. He hopes to get to a point where he never has to kill a roamer again. Though I think that depends on how soon society fully rebuilds itself, if that day ever comes. 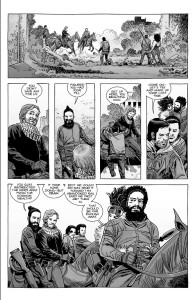 Aaron, Siddiq, and Dante eventually show up and regroup with the others. While they weren’t able to kill all of the roamers, they were able to redirect them to a supposedly abandoned rail yard. 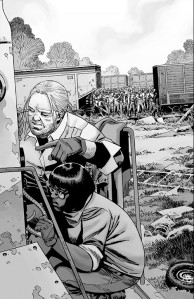 Thus bringing us to our cliffhanger of an ending to the issue, as Eugene and Stephanie are still working as the herd approaches. Now, this isn’t really that big of a cliffhanger. After all, the herd isn’t moving quietly. These aren’t Whisperers we’re talking about. If Eugene and Stephanie don’t immediately see the herd, they’ll definitely hear or smell them as they grow closer.

So I don’t believe the two are in any immediate danger unless something ridiculous happens like one of them trips. I’d like to think that the two of them are smarter than that, though. But we’ll see what happens to the two when we return for issue #189. See you then.