There is a lot going on in issue #165 of The Walking Dead, and that is both a good thing and sort of a bad.  Nothing that ruins the issue, mind you, because it was still a great read. But we have several groups in different locations battling the roamer herd at the same time and while Kirkman does take time to show us each group, it felt a bit jumbled at times. Contrast that to “No Way Out,” where you have everyone centralized in Alexandria. 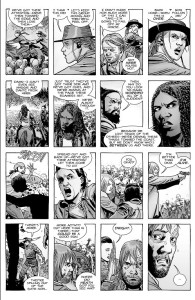 Again, this doesn’t take anything away from the issue, but this issue might have benefited from not showing all sides battling the roamer herd.  That’s a minor nitpick, I know, and we’ve had moments dedicated to several groups battling in various locations before, but here, maybe spread things out a bit across a few pages as opposed to putting as many characters as possible onto a page.

But let’s break the issue down a bit, because the meatier parts come towards the end. We have Rick and Negan continuing to clear the way so they can escape the house, with Negan almost getting bitten and overtaken by roamers.  This is Negan, though.  His time has not yet come.  But one thing’s funny: he says “Who’s getting bit these days– after knowing the rules this long?”  More on that later.

Negan is redeeming himself.  This doesn’t excuse the things he’s done, and he’s not trying to overlook those things, but he is proving his willingness to work with Rick.  Whether the others- particularly Maggie- are more accepting of this is another matter altogether and I can’t wait to see how the other communities will react when they see that Negan is free, but has been an asset to Alexandria at the same time.

Siddiq and Annie come across Eugene’s radio and hear Stephanie’s voice for a second, so expect that to come into play.  As far as I remember, no one else up until now knows that Eugene has been in communication with someone else, so the fact that his secret has been discovered could have repercussions.  That or people may wonder why Eugene didn’t say anything, but he had his reasons, as he had to gain Stephanie’s trust.

In addition, while I’m speculating on how the others will react to Eugene being in communication with someone else, I doubt there will be time to process this now while everyone is busy dealing with the herd.  So this could be a blip on the radar that could turn into something bigger after dispatching all of the roamers. 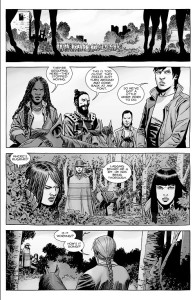 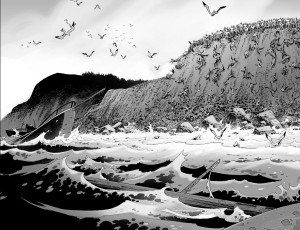 Which leads me to Andrea and the others leading the roamers into the water.  It’s a good idea and helps thin out the herd quicker than expected.  Sure, some groups will break off, but it won’t take long to redirect more roamers to be swept away by the sea.

However, Yumiko brought up an interesting point about not wanting to taste anything from the waters for a long time.  Granted, I’m sure there are plenty of walkers already under the sea, but chances are very few people thought of that until now.  Here, they’re watching a herd march into the water, so chances are you’re not going to be hungry for fish anytime soon.

To go off on a tangent, think about it: these communities trade food with another, but do they ever consider the possibility that the food may be contaminated?  Not the way that TV Ezekiel has pigs feed on roamers and then delivers those pigs to the Saviors.  I mean people harvesting and farming on terrain where roamers have decomposed into the earth.  Just something to ponder. 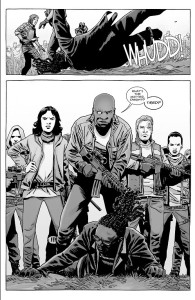 Then you’ve got the Saviors arriving to confront Dwight and start up more shit with the communities.  I said this before, but this feels like a last ditch effort from Sherry trying to rally what’s left of the Saviors into a final attack.  Unless there’s more of them waiting back at the Sanctuary, I expect the Saviors to be dealt with in no time.

Hell, I would not be surprised if Dwight was the one to finish them off, or at least Sherry since she doesn’t give a shit about John beating the hell out of Dwight.  But hey, the Saviors did manage to take out a bunch of the roamers.  So they are still providing some semblance of service.

And in the midst of this chaos, Eugene, who is already beyond exhausted, falls off his horse and it looks like this might be the end for him.  It could have been.  He’s proven his worth with the ammunition, pushed his body to its limit, and even in the middle of communication with someone from another community.  He’s done his role, so if he went out here, he’d have done so after doing some good for the communities. 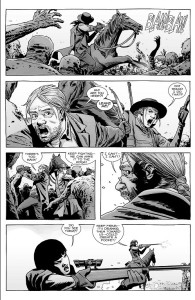 But no, Kirkman isn’t going to have Eugene go out like that.  And as Andrea goes to rescue him, there’s a lot going on around the two of them.  The roamer herd is closing in, bullets are flying from all directions- one slip-up and things could go further south than they already are right now.

And then Kirkman pulls this.  Talk about your cliffhanger, am I right?  Now before we start paying our respects for everyone’s favorite sniper, let’s step back and think about this for a moment.  As you’ll see in the issue, there are many people firing past Andrea and Eugene just to pick off some roamers and clear a path.  Is it possible that, in the midst of this, a bullet just nicked Andrea in the neck?  I believe so.

The hole itself looks pretty small compared to what we’ve come to expect from roamer bites.  More than that, anyone bitten tends to react a bit quicker, but with so much going on, it’s possible that Andrea just didn’t feel or notice the wound until she had a moment to process things.

I don’t know.  Andrea is such an important character and has done so much that it would feel strange to have her bitten off-panel or us not witness the moment happen, which is why I’m not going to say that this hole is indeed from a bite.  I could be wrong and this could be the end, but maybe Kirkman is throwing us for a loop.  The Walking Dead certainly isn’t above an old-fashioned bait and switch.

Regardless, this is indeed an effective cliffhanger.  With the Saviors making their move, the herd thinning out, and Andrea’s fate up in the air, issue #165 was a great read.  Now we come up with theories and speculate about what becomes of our dear friend, Andrea. See you next time for issue #166.