You know what?  “A Future Certain” is an aptly named chapter for the most recent issue of The Walking Dead, as the future remains uncertain for a number of characters. 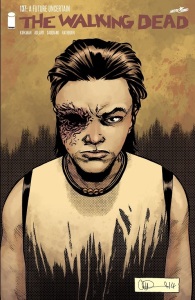 How long will it take Sophia to recover?  Will the two boys who attacked her and Carl seek retaliation?  What will Jesus do to Gregory after his discovery?  Will Maggie recover?  And, most importantly, did Carl ever learn about protection before Lydia decided to have her way with him?

Since the time skip, we’ve gotten a lot of focus on Carl’s life at the Hilltop.  He became an apprentice, saved Sophia’s life, and even made a new friend in Lydia.  He’s shaping into a man, but he still has a lot of growing up to do.

Despite the darkness we’ve seen Carl exhibit, he still shows that, like his father, he has a good heart.  It’s not all that pure, but he at least makes a point of standing in Lydia’s defense when Maggie and Jesus remind him that the Whisperers killed two of their members.  I’m not sure I fully buy his reasoning when he says that it’s hard to live in this world.

Sure, the main group has killed to survive before, but Carl was willing to put that aside when he almost killed Negan.  Not really a fair comparison since Negan also killed to survive and preserve the way of life that he created, but he, like everyone else, just did what he had to in order to survive.  Even though Negan and Lydia are completely different people- as far as I can tell- both still murdered members of Carl’s group.  Sure, the Whisperers and the Saviors may come off as dangerous people, but no more dangerous than the main group that we follow, regardless of the fact that they’re the protagonists.

In The Walking Dead universe, whether in the comic or television show, trust is not something that comes naturally.  At all.  Trust has to be earned over time and if you betray that trust, there’s a target on your back.  Carl hadn’t even seen Lydia’s face or known much about her, but he felt sure enough to give her his father’s hat a sign of trust.  There’s a bit of naïveté with Carl’s thinking here.  He may have gotten to know Lydia a bit more than Jesus and Maggie did, but he still doesn’t know everything about her.  Now there have been instances where even Rick distrusted people who, as it turned out, had nothing but honest intentions- Aaron being a good example- but I do wish Carl would be a bit more cautious.

He’s taking a leap of faith, but isn’t stupid enough to just blindly trust Lydia without question.  There’s still part of him that knows Lydia could turn on him at any moment, so I’m glad that, while he’s clearly smitten with the girl, he’s not going to take her word at face value.  Despite the horrible things these people have done to survive, do they really change or remain the same?  After all, both Carl and Rick have gone to dark places despite not wanting to kill anymore.

Meanwhile, Maggie has her own issues to deal with in Tammy and the parents, but Gregory as well.  Maybe it’s because I’ve known her for longer than these other characters, but I still think Maggie is a competent leader.  That said, the other folks at the Hilltop have reason to question her leadership: Dante going missing, Carl being let out, and the boys being attacked, even though they brought that on themselves.  Maggie definitely has her work cut out for her.

I think she’s going to survive, though.  Call me presumptuous, but Maggie has been around long enough that I don’t think Robert Kirkman would have her killed via poison.  I do wonder where Gregory got the poison, though.  If he had someone else whip it up for him, I would think they would be suspicious to wonder why Gregory needs poison.  If he had it before the time skip, why not use it on one of the Saviors?  Either way, his not too smart plan won’t really help him that much since Jesus is right behind him.

And then there’s the growing romance between Carl and Lydia.  For Lydia to want to get so close to Carl so soon makes me question her motives.  She barely knows him and she knows that he doesn’t fully trust her.  What’s good about Lydia is that she’s still shrouded in so much mystery.  We know so little about her just based off of what she has told Carl and Jesus, but we don’t know how genuine she’s being.  Is she really smitten with Carl or is she a double agent trying to get in too close?  We just don’t know yet.

You know, Robert Kirkman has shown us a fair bit of strange, disgusting, and downright odd things in this series, both before and now during this time skip, but Lydia licking Carl’s empty eye socket is just weird and…no, that’s literally the best word I can think of right now.  Careful, Carl, you don’t know where that tongue’s been.  This is easily going to compromise Carl.  After all, he’s still potentially got a thing with Anna back in the Safe Zone, he’s rekindling his friendship with Sophia, and now Lydia.

Again, I want to think it’s genuine, but it comes so fast that I can’t help but think that Lydia is playing Carl.  I mean, teaching another kid about sex isn’t something you do when you first come face to face with them.  Is this first base and a half?  Carl can’t exactly return the favor with Lydia’s eye socket since she still has both of her eyes.  Also, does this count as foreplay?  What have these Whisperers been teaching Lydia, or is this repression after spending God knows how much time in a walker’s skin?

So if Lydia does the deed and the two follow through, then our little Carl is growing up…very fast.  But this sort of thing will have consequences, I’m sure.  You don’t have these two bond, then let them have sex, and then do nothing else with it.  If anything, Carl will probably be more conflicted over his feelings for Lydia than he already is.

Also, if Lydia wants to each Carl about sex, shouldn’t she teach him about protection first?!